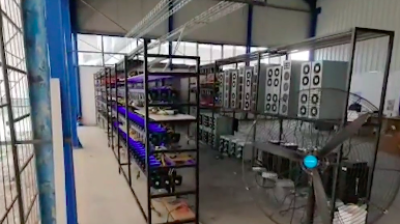 Three people were arrested for mining for crypto currency using stolen power on January 21 as the Albanian authorities seek to reduce power wastage during the energy crisis in the country.

Along with fellow Western Balkan countries Kosovo and North Macedonia, Albania is struggling under high international energy prices. The country relies almost entirely on hydropower generation, and has to import electricity at times of low production.

The cold snap in Albania has increased demand for power in the country, prompting Energy and Infrastructure Minister Belinda Balluku to urge citizens to use energy prudently in order to avert a potential energy crisis.

While Albanians were battling with extreme weather conditions, the Albanian State Police announced on January 21 they had discovered a base used for crypto mining in the port city of Durres using a fake electrical circuit in order to avoid paying for the energy.

In the police operation with codename 'CRYPTOFARM' police seized hundreds of devices in two crypto labs, according to a statement posted on Facebook.

Police estimated that the group had spent around €1mn to set up the crypto farms.

Three arrests were made, and four other people are wanted by the police. The detainees have not been named and were identified only by their initials. A 36-year-old and a 26-year-old from Tirana were arrested, along with a 23-year-old from Lushnje. They face charges including computer fraud and concealing income.

In neighbouring Kosovo, the government decided recently to ban cryptocurrency mining in response to the energy crisis and power shortages during the winter months, as cryptocurrency mining uses significant amounts of electricity to power computers that solve cryptographic equations to be rewarded with currency.

JV with 4iG aims to develop digital combat system solutions as well as ground and flight simulation systems for the provision of the most modern soldier training.

Small panels weaved on to a shirt or coat could mean never having to bother with a charger.

Tirana residents have been arguing on social media to keep a bus that crashed off the road over a river in the Albanian capital, coming to rest as an impromptu bridge.