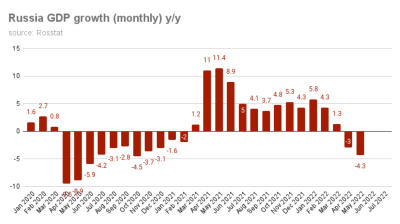 At the start of this year some economists were predicting a contraction of up to 15% and even worse, but sanction leakage and high oil prices have cushioned the blow and Russia's economy has done much better than expected. / wiki
By bne IntelliNews July 27, 2022

Russia’s economy is doing better than expected, the International Monetary Fund (IMF) said in a report on July 26, upgrading its outlook for the contraction expected this year to -6% from -8%.

The extreme sanctions the West imposed on Russia starting in March were supposed to cut Russia off from both the international financial system and starve its war machine in Ukraine. They have only been a partial success due to significant leakage.

The IMF improved the outlook on Russia’s recession by 2.5 percentage points (pp) for 2022 to 6% from the previous 8.5% GDP decline, in the latest edition of the World Economic Outlook published on July 26.

As followed by bne IntelliNews, GDP forecasts for Russia hit by Western sanctions following the military invasion of Ukraine have recently improved across the board.

“Russia's economy is doing reasonably well in the face of widespread sanctions [for the military invasion of Ukraine],” IMF’s chief economist Pierre-Olivier Gourinch commented on the improved outlook to TASS. Notably, the IMF considers the authorities' measures in the monetary sphere as effective, which gave maintained financial stability and resilient domestic demand.

GDP shrank by 4.3% year on year in May, according to the Ministry of Economy, down from a 2.8% fall in April (chart). However, this was less than economists were anticipating, who have started to improve their outlooks for the full year from the 15% contraction many predicted shortly after the fighting started to around a 10% contraction.

The IMF revised expectation is in line with the Central Bank of Russia (CBR) macroeconomic survey released two weeks earlier, which also forecasts a GDP contraction this year of -6%. The official forecast from both the government and the CBR this year is for a 5% recession. The improved outlooks are underpinned by strong exports, slower-than-expected inflation, recovery in consumer imports, and soft monetary policy by the central bank.

This is an improvement from expectations of a contraction of between 8% and 15% at the start of this year (chart).

"Russia's economy is estimated to have contracted during the second quarter by less than previously projected, with crude oil and non-energy exports holding up better than expected," the report said.

The pain of the sanctions has been eased by the high price of oil caused by limiting supplies out of Russia and a collapse in imports that has pushed the current account surplus up to record levels. Continuously high export revenues are supporting Russia’s economy. Gourinch reminded, however, that a “rather serious recession is still expected" in Russia.

Russia reported a current account surplus of $136bn for the first half of this year, $100bn more than in the same period a year earlier, says Elina Ribakova, deputy chief economist at IIF. The budget is also in profit, although it is expected to go into deficit later this year.

And thanks to an emergency rate hike to 20% on February 28 a few days after the war started coupled with strict capital controls, restrictions on withdrawals from banks and a mandatory foreign exchange surrender requirements, inflationary pressures were held down and inflation began to fall from its April peak of 17.3%. The CBR has been able to since cut rates four times to bring the monetary policy rate back down to 8%, below its pre-war level.

Russia is now the only country in Europe where inflation is falling, while the rest of the Continent struggles to control its stagflation.

Industrial output has been affected, with some sectors being particularly hard hit. Automotive production has almost entirely collapsed, but the latest manufacturing PMI returned to growth in June, largely lifted by the extractive industries.

After starting the year below $80 a barrel, oil prices spiked to nearly $129 in March, before easing back to a little over $105. Gas prices have also soared after Gazprom reduced gas flows to 20% on July 26 by taking a second compressor station offline. While the volumes of both oil and gas exports have been reduced, that has been more than offset by the price increases.

The impact of the sanctions on most Russians is minimal and life in the cities continues as normal. While many imported foreign brands have disappeared entirely there are no shortages, and more than half of Russia’s business report they have found new suppliers. Only about 5% say they cannot find any alternatives to products they previously imported from the West.

Russia's "domestic demand is also showing some resilience thanks to containment of the effect of the sanctions," the IMF said.

As the economy stabilises in addition to cutting rates, the CBR has also lifted a lot of the capital controls it imposed in the first months of the war.

▪ From accounts opened with foreign banks, regardless of the date of their opening, to one's own accounts in foreign banks in 'friendly' countries

▪ In the case of foreign currency transfers for the maintenance of property (including repairs, security, and other expenses) that is located on the territory of foreign countries and belongs to individuals who are residents by right of ownership. The amount of such transfers cannot exceed the amount of respective funding for such purposes for the preceding calendar year

▪ In all cases, account information must be disclosed to the Russian tax authorities.