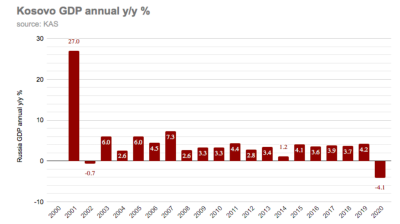 The International Monetary Fund (IMF) said on June 18 it expects Kosovo economy to expand by about 5-6% depending on the ambitious vaccine rollout programme, and the reopening of the borders which hails strong diaspora summer travel. The statement was issued after the IMF mission, led by Gabriel Di Bella, conducted a virtual staff visit to Kosovo in the period June 7-17.

“Despite the better prospects, the growth outlook remains very uncertain. On the downside, new virus variants could lead to higher infection rates and threaten economic gains,” the IMF said.

“Fiscal policy in the near term should remain supportive as a hedge against risks. Realised revenue gains vis-à-vis those in the budget can be used to support workers and firms most affected by the pandemic and to ensure a swift and efficient vaccine rollout, without affecting the budgeted fiscal balance,” the IMF said in the statement.

The IMF underlined that Kosovo’s banking sector has weathered the crisis well, while low non-performing loans (NPLs) and adequate capital and funding buffers have allowed credit to keep flowing.

In the medium term, the IMF suggested Kosovo authorities to promote policy initiatives to strike the right balance between promoting social cohesion and increasing potential growth.

“Efforts to improve revenue collection should continue and advance in tandem with other structural reforms to improve the targeting of social spending and increase the growth dividend of public investment, while ensuring that the wage bill remains within its legal ceiling,” the IMF said.

“Strengthening social infrastructure, promoting digitalization, and gradually reducing pollution and Kosovo’s carbon footprint will all contribute to faster increases in human capital and productivity, and prepare the economy for the post-pandemic challenges,” it concluded.