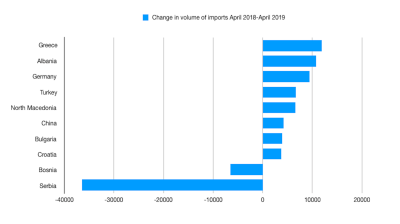 The huge trade gap is one of the biggest problems for the Kosovan economy.

It continued to widen in the opening months of 2019 despite punitive, politically motivated tariffs imposed on two of Kosovo’s neighbours Serbia — Kosovo’s top trading partner in April last year — and Bosnia & Herzegovina.

A study by the GAP Institute for Advanced Studies, a Kosovan think tank, despite the fall in imports from Serbia and Bosnia, due to the imposition of the 100% import tariffs, Kosovo's trade deficit is still huge, which means that local producers have failed to benefit from the taxes.

At the same time, imports from Greece more than doubled y/y in April, while there were also sharp increases in imports from several states in particular Greece, Albania, Germany, Turkey and North Macedonia. 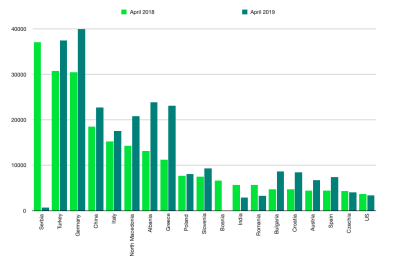 GAP’s study noted the possibility that exporters from Bosnia and Serbia could be routing their products via neighbouring countries to avoid the tariffs.

Kosovo’s export base remains weak, consisting mainly of base metal and articles of base metal, mineral products as well as plastics and rubber.

In April, Kosovo's exports to EU countries amounted to €12.3mn, or 33.4% of total exports, a 51.9% increase. The main export partners for goods within the EU were Italy, Germany, the Netherlands, Slovenia and the UK.

Kosovo's imports from EU countries were €156.3mn, or 52.9% of total imports, a 35.4% increase. The highest share of imports were from Germany, Greece, Italy and Slovenia.