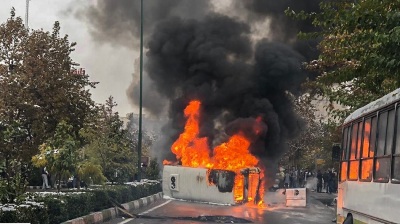 A photograph released by Iran's Fars news agency said to show a bus turned on its side and set on fire by protesters.
By bne IntelliNews November 27, 2019

Officials who last week disconnected Iran from the internet may have scored a success in helping to quell the protests by stopping activists getting their story out—but they are now suffering themselves from stronger than usual scepticism expressed in response to their attempts to explain the chain of events that occurred.

To take Iran’s regime at its word, the deadly unrest that lasted several days from November 15 was the result of a “very dangerous conspiracy” driven by Iran’s enemies that resulted in the torching of 731 banks and 140 government sites. The Islamic Republic’s Supreme Leader Ayatollah Ali Khamenei on November 27 declared that the nationwide protests, triggered by the sudden announcement of a big petrol price hike and fuel rationing, amounted to a plot that Iranians had defeated.

It was “thugs” linked to exiles and Iran’s foes—the US, Israel and Saudi Arabia—that stirred up the unrest that resulted in the largest-scale anti-government protests seen in Iran since authorities put down election fraud demonstrations in 2009, according to Iran’s leaders. “A deep, vast and very dangerous conspiracy that a lot of money had been spent on ... was destroyed by the people,” Khamenei said in a meeting with members of the paramilitary Basij force which took part in the action taken against the protests, according to his official website.

Interior Minister Abdolreza Rahmani Fazli also tried to relay just how big a conspiracy the authorities had foiled, adding in remarks to official Iranian news agency IRNA that more than 50 bases used by security forces were attacked and approximately 70 petrol stations were set on fire by elements of those who took part in the unrest, which he said involved around 200,000 people in a country of 81mn.

However, with Iranian authorities yet to release an official death toll from the protests and generally speaking of only a small number of fatalities, Human Rights Watch (HRW) published a report on November 27 stating that more than 140 people lost their lives and accusing Iran of "deliberately covering up" the extent of the repressive measures taken against those who took part in the unrest.

In the report, entitled “Iran: Deliberate Coverup of a Brutal Crackdown”, the New York-based watchdog quotes human rights groups and an Iranian lawmaker as providing its cited death tally and saying that up to 7,000 were detained during the protests.

HRW has called on the Iranian government to "immediately announce the number of deaths, arrests, and detentions from the recent protests and permit an independent inquiry into alleged abuses".

According to HRW, video footage posted on social media—that avoided the internet blackout—"clearly shows security forces using firearms targeting protesters". Numerous social media posts indicate relatives and family members have not been allowed "to get the bodies of their loved ones and have been restricted in their ability to perform burial services," it added.

"Twelve days after protests broke out in Iran, the authorities have refused to provide an accurate death toll and instead threatened detainees with death," said Michael Page, deputy Middle East director at HRW.

“Keeping families in the dark about the fate of their loved ones while ratcheting up an atmosphere of fear and retribution is a deliberate government strategy to stifle dissent,” said Page.

The NGO’s report also calls on Iran to establish an "independent administrative or prosecutorial process" to promptly investigate all incidents of security forces using firearms to kill or injure people, as required under the UN Basic Principles.

Further pushing the official line that the unrest was the result of a foreign plot, IRNA reported that at least eight people allegedly linked to the CIA were arrested during the upheaval. "These elements received CIA-funded training in various countries under the cover of becoming citizen-journalists," the Intelligence Ministry was quoted as saying.

Also on November 27, Iranian Oil Minister Bijan Zanganeh told semi-official ISNA news agency that daily petrol consumption was down by around 20mn litres since the price hike of a minimum 50% and rationing was brought in.

The government has said the petrol price increase should raise around $2.55bn a year, which officials intend to plough back into the economy in the form of extra subsidies for 18mn families struggling on low incomes amid the “economic attack” the US is waging against the country with crushing sanctions.

US likely to bristle at new Iran plan to put satellite in orbit
Turkey’s Halkbank exposed to US court fine of $1.8bn within two weeks if prosecutor’s request accepted
‘People of assassinated general’s home province will pay $3mn bounty to anyone who kills Trump’ says Iranian MP