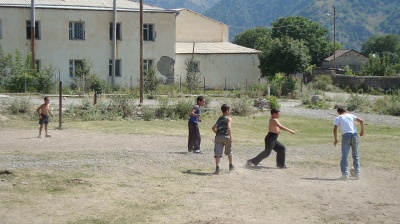 Children playing football in Kelbajar (Karvachar in Armenian) in Nagorno-Karabakh. Kelbajar will be handed over by Armenian forces to Azerbaijan on November 15.
By Joshua Kucera for Eurasianet November 12, 2020

The peace deal between Armenia and Azerbaijan has stopped the bloodshed and averted a looming humanitarian catastrophe. Its wide-ranging provisions on shifts in territorial control, a Russian peacekeeping presence and new transportation routes promise to fundamentally reshape the political order of the South Caucasus.

But many questions remain about the Russia-brokered deal, and there are several potential pitfalls that could complicate its implementation and spoil the prospect for real peace between the two sides. Here are some that have emerged since the deal was announced on November 10.

It’s not quite true, though: At least in the short term, Armenians retain control of the parts of Nagorno-Karabakh that had not been militarily retaken by Azerbaijani forces before the agreement was signed, including the regional capital of Stepanakert. The agreement doesn’t even mention the issue of the status of those areas and how that will be decided. Will they stay under Armenian control? Will their status be determined by a referendum? Will they, too, pass to Azerbaijani control? It’s not even hinted at in the agreement.

Azerbaijan President Ilham Aliyev, however, gloated after the agreement was announced: “What happened to the status? The status has gone to hell. No status. And there won't be any status. It won't happen as long as I am president.” This suggests that not only would he not accept allowing them to remain long-term under Armenian control, but that he doesn’t envisage even autonomy under Azerbaijani control.

But Nina Caspersen, a scholar of the conflict, said that it appeared the agreement would allow for some kind of autonomous status within Azerbaijan. “However autonomy comes in many different forms,” she said shortly after the deal was signed that “Turkish military will work” in a peacekeeping centre that the agreement did mention. The Russian news agency Interfax reported, citing unnamed diplomatic sources, that the Russian and Turkish defence ministries signed an agreement creating a “joint ceasefire monitoring center” in Karabakh.

Putin spokesman Dmitry Peskov later told Interfax that the centre would be “in the territory of Azerbaijan, it will not be in Karabakh, and it’s about a monitoring center” not peacekeepers. But Turkish President Recep Tayyip Erdogan muddied the waters, announcing on November 11 that "Turkey will join the peacekeeping forces in the [Karabakh] region to monitor the implementation of the deal with Russia.” Erdogan said the centre in question would be in “Azerbaijani territories that were liberated from Armenia's occupation.”

The agreement stipulates that “Internally displaced persons and refugees shall return to the territory of Nagorno-Karabakh and surrounding areas under the supervision of the Office of the United Nations High Commissioner for Refugees.” But does this mean just Azerbaijanis returning to Azerbaijani-controlled territory and Armenians returning to Armenian-controlled territory? Or do the two sides envisage working on allowing displaced civilians from the other community back into their respective territories?

Among the complications, notes the International Crisis Group: “[T]here may well be competing property claims between [Armenians] and returning Azerbaijanis and given the high levels of antipathy between the populations, now reinforced by the brutality of recent weeks." ICG also noted that the UNHCR, despite having been cited in the agreement text, had not been consulted.

This is an issue if the territory that Armenia now controls remains under their control. The current de facto boundary between the two sides runs between Shusha and Stepanakert. These are only about 10 kilometres apart and Armenian-controlled Stepanakert is straight downhill from Azerbaijan-controlled Shusha. Stepanakert will always be militarily vulnerable in this situation and its Armenian population will never feel entirely secure with Azerbaijani troops looming overhead.

None of this should be a significant security issue as long as the Russian peacekeepers are there to separate the two sides. But neither side is excited about the long-term presence of Russian troops, who have a region-wide reputation for overstaying their welcome and operating under their own agenda. For now, their presence is vital (and, it has to be emphasised, no one else appears to be interested in doing it). But either they stay for ever, or the Armenians and Azerbaijanis have to work this out. 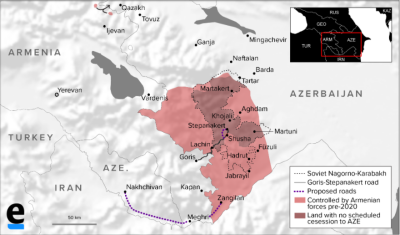 This one is presumably further down the road, but it would seem to be fraught with potential complications. The agreement stipulates that “Armenia guarantees the security of transport links … [for] unimpeded movement of citizens, vehicles, and cargo in both directions” between mainland Azerbaijan and the exclave of Nakhchivan, which are separated by a swathe of southern Armenian territory.

It continues: “Transport control is exercised by the Border Service of the Federal Security Service of Russia. By agreement of the parties, the construction of new transport communications connecting the Nakhchivan Autonomous Republic and Azerbaijan's western regions will be provided.”

So how will this be implemented? Will there be a special road only for Azerbaijanis? Will it still be Armenian territory, or Azerbaijani, or under some sort of international administrative regime? How will Armenians and Iranians be able to cross it into one another’s countries? Even once those issues are worked out, it’s not too difficult to imagine simple things like potholes on the road leading to international incidents in the atmosphere of mistrust that is sure to persist for a long time.

All of this is going to have to be managed between the two sides which have virtually no trust in the other and an international community which has – with the exception of Russia – basically stepped aside, distracted with other problems. It’s going to be a difficult process.

This story was supported by the Pulitzer Center.

Russia’s military exercises near the Ukrainian border have many analysts looking into Ukraine’s capacity to defend against a full-fledged attack. While Kyiv has invested heavily in modernising its military, it remains seriously outgunned.

The euphoria of the 1990s is back as small investors ignore the risks and dream of getting rich overnight.

BORDERLEX: EU Commission goes back to the drawing board to revive Turkey trade talks

The Commission's latest attempt to revamp the customs union with Turkey faces many obstacles before it can even start.

COMMENT: Strengthening the foundation of the Uzbek capital markets infrastructure

After their sitting moribund for two and half decades, Uzbek President Shavkat Mirziyoyev has just launched a major reform of the Uzbek capital markets that could transform financing in the republic.

FPRI BMB Ukraine: How well could Ukraine defend itself against a Russian attack?
3 hours ago
Romanians gripped by cryptocurrency euphoria during the pandemic
21 hours ago
BORDERLEX: EU Commission goes back to the drawing board to revive Turkey trade talks
1 day ago
COMMENT: Strengthening the foundation of the Uzbek capital markets infrastructure
1 day ago
COMMENT: Fresh US sanctions and OFZ primary market ban a global non-event, but sanctions possibly now entrenched quasi indefinitely
4 days ago