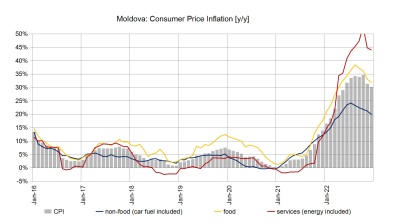 Consumer prices in Moldova edged up by only 0.76% month on month in December, partly thanks to the gas-for-electricity deal reached by the authorities in Chisinau with separatist Transnistria, and the annual inflation eased to 30.2% from 31.4% in November.

The annual inflation, as well as each of the three components (food, non-food and services), decreased for the second month in a row, supporting the central bank’s decision to cut the monetary policy rate by 1.5pp to 20% on December 5, after the annual inflation rate came in slightly below expectations in October.

The central bank said in December that the monetary policy relaxation would continue if future inflation data confirm its expectations. This remains a viable option for the next monetary board meeting, particularly as the economic growth deteriorated faster than expected in 2022 (by over 3%).

Demand-side drivers added to the significant supply-side factors that have shaped inflation over the past year in Moldova. Thus, the average retail sales (volume terms) in the 12-month period to October 2022 decreased by 0.6% year on year. The figure most likely further deteriorated again by December. In October alone, retail sales in Moldova shrank by 3.3% y/y, posting a negative annual growth rate for the seventh month in a row.

But the energy and food prices, pushed up by either external factors (energy prices) or both external and domestic exogenous causes not under the control of the central bank (food prices) remain the major inflation driver.

The market regulator in Moldova, ANRE, announced on December 8 that it cut the end-user electricity prices by 22% for the region including Chisinau and the southern part of the country and by 17% for the northern part of the country. The price cut announced reverses the increase in the energy prices approved on December 1, after Energocom had to rely on Romania’s spot electricity market in November and the country was supplied under the emergency arrangement with its neighbour, at prohibitive prices, for several days of the month. Overall, the electricity price in December rose by 11% m/m and by 2.7 times y/y.

But the regulated heating price was cut by 25% m/m resulting in a moderate 6.5% y/y advance.

COMMENT: The new Cold War will be different, and not only because of China
INTERVIEW: Helen Rodwell, head of CMS’ corporate practice in CEE
Russian foreign minister speaks of Moldova as the “next Ukraine”