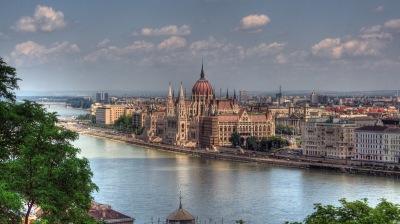 December saw a recovery in Hungarian wages, but as a third wave of the coronavirus gets underway there was a sharp fall in January's results
By Peter Virovacz is a Senior Economist with ING in Hungary February 26, 2021

It was just a matter of time before we saw a serious impact on the Hungarian labour market from the second wave of coronavirus (COVID-19). The January data suggests a slump in growth in the first quarter, despite the latest upside surprise in wages.

The Hungarian Central Statistical Office changed its methodology for calculating the labour market statistics, in accordance with new international statistical regulations. This translates into higher employment statistics in the new time series, which was recalculated from 2009 to now.

The new methodology didn’t affect the labour market story at all. The second wave of COVID-19 impacted the jobs market with a delay, as was the case with the first wave. In December, we said the labour market remained resilient, but the January data paints a much worse picture. The unemployment rate jumped to 5%, showing a 0.8ppt increase compared to the previous month. The worsening itself was expected, as the National Employment Service data for January showed a significant jump in the number of jobseekers. 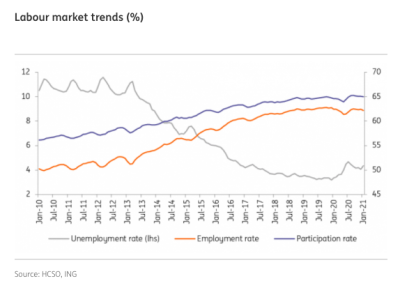 So the incoming employment statistics suggest a challenging first quarter for the Hungarian economy. Moreover, as we are on the brink of a third wave, we anticipate a further worsening of employment statistics in the coming months. Real disposable income of households is expected to show a marked deterioration on the employment side as well as from the wages side.

Some might say that with the upside surprise in wages in December, the situation is not that bad at all. But to tell the truth, the latest wage data are misleading. First of all, the 10.6% year-on-year wage growth in December 2020 was mainly driven by one-off payments and bonuses. This is quite a surprising outcome considering the economic performance last year. Wage growth in the public sector slowed to 7% y/y, while in the corporate sector it was almost 12% y/y. At first sight, this looks pretty good. 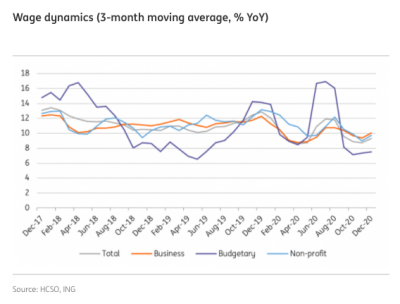 However, if we compare these wage statistics to the retail sector performance in December, something is not right. We should not see a 4% y/y drop in retail sales with such strong wage growth. In our view, precautionary savings may increase significantly, cutting back spending despite the strong income data. On the other hand, wage data only counts those workers who are working full-time. During the second wave of COVID-19, we saw a jump in part-time working, especially in sectors that have been hit by the containment measures (mainly services). In addition, wages in these sectors are much lower than the national average. This means a positive composition effect, which drives wages higher, while the reality shows a worsening income situation.

The sound December data might be partially a technical issue, partially a one-off jump due to premiums and bonuses. On top of that, we know now that the minimum wage increased by only 4% y/y, and due to lengthy negotiations, this was first used in February, so there will be a marked slowdown in wage growth in the coming months.

Against this backdrop, we expect a rather difficult first quarter from a labour market perspective, which will also affect the pace of GDP growth. Considering the latest data, we do not consider it likely that the dynamic GDP expansion seen in the fourth quarter can be repeated. Moreover, in the light of supply disruptions in the automotive industry, which may even have temporarily affected unemployment data, it is even more difficult to imagine dynamic economic growth at the beginning of the year.

Peter Virovacz is a senior economist with ING in Hungary. This note first appeared on ING’s THINK.ING portal here.