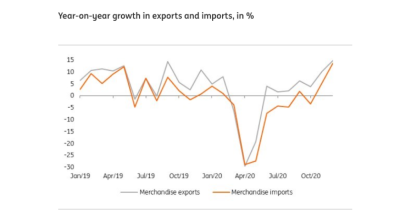 Poland enjoyed doubt digit foreign trade growth in 2020 that significantly cushioned the blow of the multiple shocks to the economy
By Leszek Kasek senior economist at ING in Warsaw February 17, 2021

Poland's central bank has just released balance of payments data for December and posted a moderate €0.4bn current account surplus,. That translates to a record-high GDP surplus of 3.6% for 2020 as a whole

The December surplus was five times lower than in November and compared to market consensus of €1.1bn and our projection of €0.9bn. However, there is a strong seasonality pattern in foreign trade, with lower volumes in December because of the holiday season. Nonetheless, Poland continues to be an exporting nation. And the rebound in imports is not necessarily a bad thing, as it may suggest a revival of domestic investment from its record low levels.

Poland posted current account surpluses in every single month of 2020, which made together €18.4bn (3.6% of GDP) in the pandemic year compared to a €2.6bn surplus in 2019 (0.5% of GDP). The merchandise trade surplus increased form €1.2bn in 2019 to €11.7bn in 2020. At the same time, Poland recorded a €24bn surplus in services accompanied by a sizeable €15.9bn deficit in primary income and €1.5bn deficit in secondary income, but these patterns were already in place in the previous years.

Although the merchandise trade surplus in December 2020 was six times lower than in November (€0.3bn vs €1.9bn), the 12-month cumulative balance increased slightly to 2.3% of GDP in December from 2.2% of GDP in November. Merchandise exports' growth, expressed in euro, gained further momentum and reached 14.8% y/y compared to 10.1% growth in November. Imports – for the first time in 2020 – expanded by double digits: 13.6% y/y in December from 5.3% a month before.

Solid performance in the export of goods indicates it appeared immune to pandemic restrictions as it is driven by durable consumer goods, which have been in high demand as people spend long hours in their home offices due to lockdowns. Also, Poland’s exports benefitted from previous greenfield Foreign Direct Investments in the production of batteries for electric cars, car parts and vehicles. For example, the output of car batteries contributed about 2.5pp to the impressive 11% y/y growth of industrial production in December (boosted by calendar effects).

The rebound in imports may suggest a recovery of domestic demand in Poland, which is a good sign given that investment rate was bottoming out in recent quarters. Also, as oil prices started to rise again from November, this category no longer helps lower the import bills as much as in the previous moths. According to the NBP, the most dynamic import growth was recorded in clothing, wireless communication devices, computers, medical diagnostic tests and car parts. 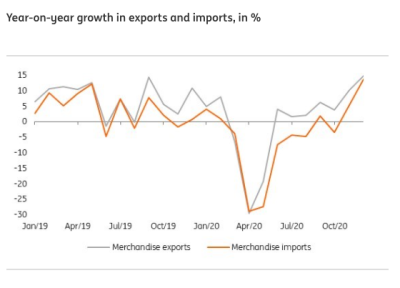 Net exports contributed positively to the solid GDP growth performance in Poland in 2020. The CSO has just released a flash estimate of -2.8% year-on-year in the fourth quarter and we estimate net exports contributed positively in 1.5pp to economic growth. Last year’s CA surplus of around 3½% of GDP is not sustainable though in 2021, given that domestic demand is set to revive and oil prices are marching north. We project the current account surplus to moderate to 2% of GDP this year.

Leszek Kasek is a senior economist at ING in Warsaw. This note first appeared on ING’s THINK.ING portal here.

ING: Turkey’s inflation remains on an upward path
17 hours ago
FPRI BMB Ukraine: Kyiv aiming for a staff-level agreement with IMF by late May
1 day ago
ING: higher oil does not mean better outlook for Russia’s ruble
1 day ago
COMMENT: Democracy is struggling in Georgia
1 day ago
OBITUARY: World’s longest-serving city mayor Milan Bandic dies of heart attack
3 days ago