ING: German Ifo down, recession not a question of “if” but “how bad will it be” 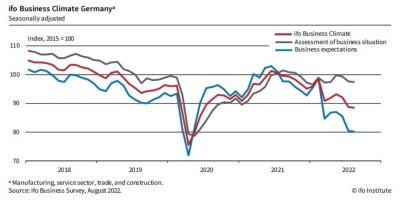 Germany's economy is slowing and its about to go into recession. Just how bad will it get? / bne IntelliNews
By Carsten Brzeski Global Head of Macro for ING Research August 29, 2022

The list of arguments for why the German economy is sliding into recession is getting ever longer. The question isn't about whether there'll be a recession, but rather how severe and how long it will be.

Germany’s most prominent leading indicator, the Ifo index, just dropped for the third month in a row, coming in at 88.5 in August, from 88.7 in July. This is its lowest level since June 2020. The positive interpretation is that the weakening of the Ifo index is slowing down. The negative interpretation is obviously that no improvement is currently in sight. Expectations remain close to their all-time lows and were only worse in December 2018 and April 2020.

Earlier this morning, the details of German GDP growth in the second quarter brought some positive surprises. Growth was slightly revised upwards to 0.1% quarter on quarter, from zero in the first estimate, which finally brought the German economy back to its pre-crisis level. Private consumption surprised to the upside (+0.8% q/q) and even more importantly, was revised upwards significantly in the first quarter to +0.8% q/q, from initially -0.1% q/q. It was net exports and the construction sector which weighed on economic activity in the second quarter.

Looking ahead, however, it is hard to see private consumption holding up when inflation is high, energy invoices will be doubling or tripling in the coming months and consumer confidence is at all-time lows. Tuesday’s PMI readings already suggested that the economy is in contraction territory and we are afraid that this time around the indicators are right.

In fact, the German economy is quickly approaching a perfect storm. The war in Ukraine has probably marked the end of Germany’s very successful economic business model: importing cheap (Russian) energy and input goods while exporting high-quality products to the world, benefitting from globalisation. The country is now in the middle of a complete overhaul: accelerating the green transition, restructuring supply chains and preparing for a less globalised world. And these things come on top of well-known long-standing issues, such as a lack of digitalisation, ageing infrastructure and an ageing society, to mention a few. In the coming weeks and months, these longer-term changes will be overshadowed by shorter-term problems: high inflation, possible energy supply disruptions and ongoing supply chain frictions. In recent weeks, these shorter-term problems have become larger as low water levels and the new gas levy have added to inflation and recession concerns.

There are some upsides. Surprisingly strong consumer spending in the first half of the year is one. The fact that the filling of the national gas reserves is actually ahead of schedule is another. Gas reserves are currently back to their average levels of 2016-2021. However, it remains far from certain whether gas reserves at 95% in November, as targeted by the government, can get energy consumption through an entire winter without Russian gas. There are simply too many unknowns like the severity of the winter season and the potential reductions in gas consumption by households and corporates. In any case, even without an energy supply disruption, the economy would still be facing high energy costs. This alone, combined with the disruption from the low water levels for industry, ongoing geopolitical uncertainty and supply chain frictions, should be enough to push the German economy into a winter recession.

Today’s Ifo index adds to the long list of evidence that the German economy is sliding into a winter recession. The question no longer seems to be if it will be a recession. The only question is how severe and how long that recession will be.

Hungary faces risk of severe economic instability if it does not get frozen EU funds, warns Oxford Economics

Consultancy says economy could face hard landing even if it convinces Brussels to release funding frozen over its abuse of the rule of law.

PANNIER: Might Tokayev be the real deal?
1 day ago
OPINION: Bosnia economic salvage supplants breakup mood
6 days ago
ASH: Turkey is heading to “incumbent democracy”
6 days ago
RIMMER: You only sing when you’re winning
7 days ago
Hungary faces risk of severe economic instability if it does not get frozen EU funds, warns Oxford Economics
10 days ago