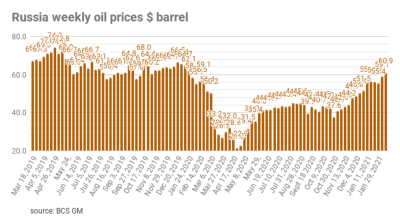 Oil prices have recovered to rise above $60 a barrel again on the back of the anticipated post-COVID bounce-back. Where will they go from here?
By Warren Patterson head of commodities strategy at ING in Singapore February 19, 2021

There seems to be no stopping oil prices, with ICE Brent now trading comfortably above $60/bbl. Clearly OPEC+ cuts are doing their job, while global recovery hopes are playing a big part. Given the market is set to tighten further, we see further upside for prices as supply cuts speed up the tightening process.

The additional supply cuts announced by Saudi Arabia at the start of the year have clearly helped to speed up the rebalancing of the oil market. The additional 1mn barrels per day (bpd) of cuts from Saudi Arabia, along with the bulk of other OPEC+ members (with the exception of Russia and Kazakhstan) keeping their production levels unchanged, has ensured that the market will continue to draw down inventories over 1Q21, despite the wave of lockdowns seen in January.

It's not just tighter supply which has been a catalyst for the move higher; rising hopes of a global recovery have been bullish as well, as we see coronavirus (COVID-19) cases falling once again and the rolling out of vaccines. This does mean that we are a step closer towards returning to some form of normality, which should be supportive for oil demand. We are still of the view that the demand recovery is going to be a long and slow process, and it is only when we get into the second half of this year that we should see a more robust recovery.

For 2021 we see oil demand growing by a little more than 6.5mn bpd, after having fallen by a little over 10mn bpd in 2020. 2Q21 should be the quarter where we see the strongest y/y growth at around 14mn bpd, but this obviously reflects the low base in 2Q20, when demand bottomed as a result of COVID-19 lockdowns. We still expect to finish this year with demand below 2019 levels; however, as we move through 2022 we should see a return to pre-pandemic levels. 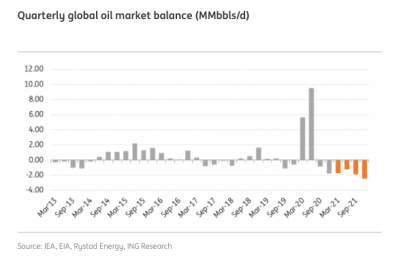 Moving away from fundamentals, and there are some external factors which are proving bullish not just for oil, but the broader commodities complex. Inflation expectations are growing with the ultra-loose monetary policy we have seen from central banks around the world, coupled with fiscal stimulus. These growing expectations have led to a significant pick up in investor interest, given that commodities are seen as somewhat of an inflation hedge.

If we look at speculative positioning in ICE Brent, it has increased considerably in recent months, with the net long back at levels last seen in February last year. However, what is more interesting when looking at the positioning data is that within the managed money segment, we have also seen a significant amount of spread positions put on, which suggests that we are seeing speculators taking advantage of the backwardated structure of the forward curve.

We came into 2021 with a bullish view for the oil market, but clearly Saudi Arabia’s additional supply cuts, growing demand hopes, rising inflation expectations and the broader USD weakness have meant that the market outlook is even more bullish than we anticipated.

As a result, we have revised higher our oil forecasts, and now expect ICE Brent to average $65/bbl over 2021, compared with our previous forecast of $60/bbl. While we see limited further upside in the first half of this year, it is over the second half of this year where we see more upside, given the expectation of a stronger demand recovery over this period.

While we revise our forecasts higher, there are still clear downside risks. First, while we are seeing the roll-out of vaccines, there is the risk that we still see further waves of COVID-19, which would weigh on demand. Secondly, any signs of tapering from the US Federal Reserve with regards to its bond buying programme could put pressure on risk assets, including oil. Thirdly, a swift return of Iranian barrels could slow the market rebalancing process. However, for now we do not see a significant return of Iranian supply until later this year at the earliest. Finally, there is always a risk that OPEC+ fails to agree on the next steps with regards to production cuts at its meeting on 4 March.

What does OPEC+ do now?

OPEC+ will want to do everything possible next month to avoid a repeat of the March 2020 meeting, where the previous deal fell apart. It is set to be an interesting meeting, and there will likely be some differing views on what the group should do next. While the additional 1mn bpd of voluntary cuts from Saudi Arabia will expire at the end of March, the group will need to decide for the rest if they continue to maintain current production levels or start to ease cuts.  Russia will likely put pressure on the group to ease output cuts, with comments from the government suggesting that the market is already balanced. They will find it difficult to justify continuing to hold off a significant amount of supply from the market, when ICE Brent is trading well above $60/bbl.

Under the initial deal the group should be cutting by 5.8mn bpd; however, with the additional voluntary cut from Saudi Arabia and the bulk of other producers keeping their cuts unchanged, the level of cuts over March will be a little over 8mn bpd. It is unlikely that the group would bring a little over 2.2mn bpd of supply back onto the market, aware that the market would baulk at such a decision. However, there is certainly room for some level of easing, though much will depend on how quickly Saudi Arabia decides to bring back the volumes from its additional voluntary cuts.

It will also be up to OPEC+ to ensure that the market does not rally too much further, at least in the relatively near term, with the risk that it sees a swift return of US drilling activity. Significant further price strength would likely lead to growing calls not just from within the group, but also from consumers for OPEC+ to ease more aggressively.

How will US producers react?

A recovery in prices has seen upstream activity in the US pick up, with an increase in both drilling and completion activity. Baker Hughes data shows that the number of oil rigs in the US has increased by 134 since the lows in August last year, leaving the rig count at over 300. This is still a far cry from pre-COVID-19 levels, but clearly with the stronger price environment, drilling activity should only increase further.

If we look at the WTI forward curve, while it is in deep backwardation now, the curve is trading above $50bbl all the way through until the end of 2023, which should be enough of an incentive for US producers to increase drilling. CFTC positioning data for WTI shows that there has been a fairly large increase in producer hedging since the start of the year, given the more attractive price levels along the curve.

Warren Patterson is the Head of Commodities Strategy at ING in Singapore. This note first appeared on ING’s THINK.ING portal here.

ING: Turkey’s inflation remains on an upward path
17 hours ago
FPRI BMB Ukraine: Kyiv aiming for a staff-level agreement with IMF by late May
1 day ago
ING: higher oil does not mean better outlook for Russia’s ruble
1 day ago
COMMENT: Democracy is struggling in Georgia
1 day ago
OBITUARY: World’s longest-serving city mayor Milan Bandic dies of heart attack
3 days ago