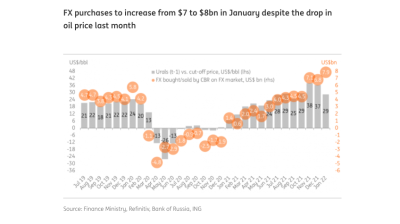 Russia’s foreign exchange purchases will increase from $6.8bn in December to $7.9bn in January, mostly due to higher taxation.
By Dmitry Dolgin chief economist Russia at ING in Moscow January 12, 2022

Russia’s foreign exchange purchases will increase from $6.8bn in December to $7.9bn in January, mostly due to higher taxation.

The Russian Finance Ministry announced on January 12 that monthly foreign exchange (FX) and gold purchases will increase from RUB502bn in December 2021 to RUB586bn in January 2022, corresponding to a rise from $6.8bn to $7.9bn, as you can see in the chart below, at the current FX rate.

This announcement is significantly higher than our $4.6bn expectation and the $4.9bn forecast by Reuters. Expectations of lower FX purchases in January were based on the noticeable decline in the Urals price the previous month, which typically is a good predictor of the extra oil and gas revenues received by the Russian budget. This time, however, the actual FX purchases, which are the highest in the history of the fiscal rule, are around $3bn higher than suggested by the oil price.

Out of the $3bn difference, $1.2bn reflects retroactive improvement in last month's fiscal revenues from oil and gas, while the remaining $1.8bn is attributable to January developments.

According to the draft budget for 2022, this year's annual fuel revenues of the budget are expected to grow by $16bn compared to last year, for reasons unrelated to oil prices and the exchange rate.

According to our estimates, around $7bn is due to higher production and export volumes thanks to the relaxation of OPEC+ restrictions and other reasons, while the remaining $9bn is due to higher taxation as part of tax manoeuvres and lower tax exemptions.

The total non-macro changes are equivalent to $1.3bn of extra revenue per month, on average, but we suspect that the tax-related changes may have a higher impact at the beginning of the year. 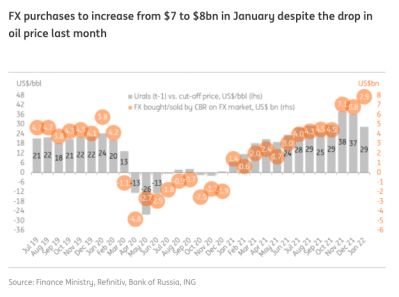 There have been ​higher FX interventions to limit ruble appreciation in January, but we remain constructive for the year.

Our analysis suggests that only $0.3-0.6bn out of the $3bn FX purchases surprise in January is covered by a corresponding positive surprise in January export proceeds, technically making it a negative surprise for the ruble exchange rate. Due to seasonally fewer working days in January, the daily FX purchases are also set to jump by almost 60% from $309m between 7 December and 13 January to $490m between 14 January and 4 February, which could serve as an additional temporary pressure factor for the local FX market.

At the same time, a broader balance of payments context allows us to treat FX purchases as largely benign for the ruble in 2022. Assuming an average annual Urals price of $73 per barrel, the Russian current account may reach around $110-120bn this year (including $40-45bn in 1Q22), while FX purchases are unlikely to exceed $75bn (including $19-21bn in 1Q22). If the government delivers on its promise to start local infrastructure investments out of the sovereign fund, this year's annual market interventions could be reduced by up to $12bn.

We therefore do not see higher FX purchases in January as a threat to ruble depreciation. Assuming further stabilisation of the political situation in neighbouring Kazakhstan and an orderly withdrawal of CSTO forces, the USD/RUB has a chance to erase the remaining 0.3 RUB of "Kazakhstan risk" premium in the coming days.

For now, we also maintain our generally constructive view on ruble fundamentals for the first half of this year. Nevertheless, the ongoing foreign policy developments between Russia and its Western counterparts, as well as uncertainties around global risk appetite, remain an important watch factor for the ruble exchange rate in the medium term.

Dmitri Dolgin is the chief economist for Russia at ING. This note first appeared on ING’s THINK.ING portal here.