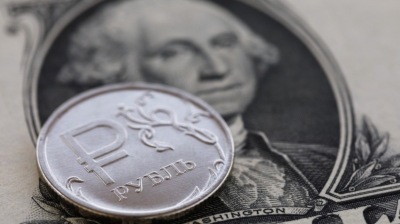 A stronger-than-expected current account surplus in July combined with a recovery in portfolio inflows in August are limiting the depreciation risks for the RUB
By Dmitry Dolgin chief economist Russia at ING in Moscow August 18, 2020

A stronger-than-expected current account surplus in July combined with a recovery in portfolio inflows in August are limiting the depreciation risks to RUB from current levels.

The preliminary estimates of the Russian balance of payments for 7M20 point to the resilience of the current account, which posted a $2.2bn surplus in July ($24.6bn for 7M20) despite the physical restraint in fuel exports and recovery of imports to pre-crisis levels.

At the same it highlights the volatility and significance of net private capital outflows, which totalled a massive $6.0bn ($34.9bn in 7M20). That, amid reduced FX sales by the Central Bank of Russia (CBR) and no apparent portfolio inflows into the state debt, was the primary contributor to the average monthly RUB 3% depreciation to the dollar and widening in RUB's discount to EM/commodity peers.

We take the $2.2bn current account surplus reported in July (it shouldn't be compared with June's negative $7bn reading that was affected by the accrual of annual dividend payments) as surprisingly strong.

The preliminary customs data for July suggests that non-CIS imports, accounting for around 90% of the total merchandise imports, showed a small 0.4% year-on-year increase after the rapid recovery in overall merchandise imports dynamics from -20% y/y in April to -6% y/y in June.

In the meantime, exports should have been under pressure due to Russia's OPEC+ commitments since May (fully complied with), however, the previous monthly data suggests that Russia saw $0.6-0.7m of export revenues per each $1/bbl Urals price in May-June, which is higher than the $0.5m historical average for the respective months.

A lack of services imports due to the unavailability of outward tourism could have also contributed to the strength of the current account. The easing in the OPEC+ restrictions since August should further improve the exports picture, rendering the CBR's expectations of a $20bn current account deficit in 2H20 overly pessimistic.

Meanwhile, the accompanying easing in foreign travel restrictions as well as a further recovery in merchandise imports should limit the recovery, likely pushing the current account surplus at near-zero levels.

The current account surplus was supplemented by $1.8bn FX sales conducted by the CBR in accordance with the fiscal rule. As we mentioned earlier, this represents a gradual reduction compared to the previous levels amid the recovery in oil prices.

In August, the support to the FX market is to be halved to $0.9bn, and under Urals at around $45/bbl we see $0.5-1.0bn sales in September and $1.0-1.5bn monthly sales in 4Q20. The latter will reflect the residual FX sales related to the one-off transaction related to the Sberbank equity handover between the CBR and Finance Ministry. Overall, we reiterate our take that the CBR presence on the FX market should now be minimal.

Portfolio inflows into the local state debt market (OFZ), once a major contributor to the RUB appreciation, have been close to zero, based on the preliminary daily data by the National Settlement Depository. The non-resident participation on the local debt market has been relatively flat since June, however, some modest recovery is observed since August, after the yield curve steepened. The latter (reflecting higher yields in the longer end of the curve) has reflected the imminent increase in the debt supply amid the widening deficit, as well as a moderation in the dovish expectations regarding the CPI growth and key rate floor.

The net private capital outflow of $6.0bn in July has outweighed the current account surplus and FX inflow from the CBR, being the main contributor to the RUB depreciation. The outflow exceeds levels suggested by seasonality and comes despite the apparent increase in the corporate foreign debt, which suggests accumulation of foreign assets.

Since March this year, the government is actively pushing the increase in taxation of the outward cross-border outflow of dividends, royalties, and interest payments from 0-5% to 15%, and so far has been successful in negotiations with Cyprus, Russia's key FDI partner.

It remains to be seen whether this action (as well as potential increase in taxation for outer destinations) would result in lower capital outflow or higher repatriation. It largely depends on whether the cause of the capital outflow is tax optimisation or other concerns including challenges with the institutional environment and/or with growth prospects. For now, we view the CBR's expectations of $4bn net private capital inflow for 2H20 as an optimistic scenario.

The July balance of payments data does little to change our overall view on RUB. A stronger-than-expected current account surplus in July combined with a recovery in portfolio inflows in August are limiting the depreciation risks to RUB from current levels, while the expected increase in the FX sales in 4Q20 further supports stabilisation of $/RUB in the middle of the 70-75 range in the medium term.

Meanwhile, the persistently high net private capital outflow remains a risk factor, suggesting a still high vulnerability of the local FX market to external risks, such as foreign policy events, EM risk-off, or sudden reversal in the $weakening trend (which, however, is not our base case). As a result, elevated volatility near the upper range in the coming weeks cannot be excluded. 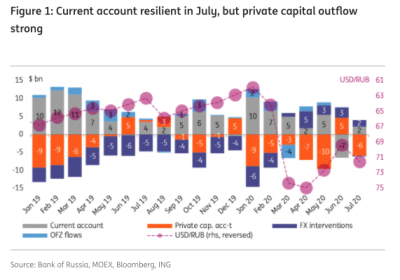 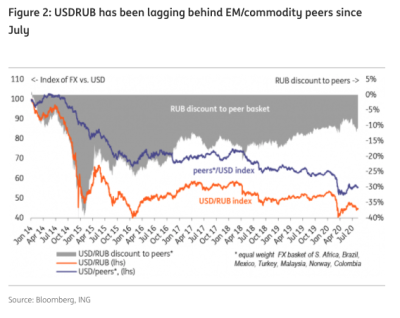 Dmitri Dolgin is the Chief Economist, Russia, at ING in Moscow. This note first appeared on ING’s “Think” portal here.

COMMENT: Ukraine’s the Old Rotten System is alive and well
3 days ago
STOLYPIN: Whatever is happening to Putin?
7 days ago
FPRI BMB Ukraine: Lawmakers’ promises, one year later
11 days ago
FPRI BMB Russia: Russian to hold elections in 83 regions
12 days ago
Turkmenistan: They call me Mr. Boombastic
12 days ago