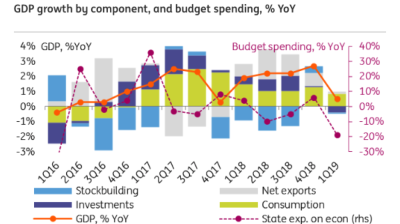 ING says that 1.1 percentage point out of overall 2.2 ppt GDP slowdown in 1Q19 vs. 4Q18 was related to the drop in fixed investments and destocking
By Dmitri Dolgin chief economist Russia ING July 2, 2019

The scheduled pick-up in state-sponsored investments leaves hopes for a recovery in Russian GDP growth following the disappointing 0.5% y/y in 1Q19. However, the weakness in exports and consumption, which have little fundamental support now, suggests that the recovery, at least in 2019, will be quite modest

GDP growth will pick up in 2019 thanks to the budget spending...

The recently released structure of the 1Q19 GDP growth by usage supports our earlier take  that at least part of the deceleration of the GDP growth from 2.3% in 2018 (including 2.7% y/y in 4Q18) to the disappointing 0.5% y/y in 1Q19 was due to temporary factors, mainly related to the budget spending.

Indeed 1.1 percentage point out of overall 2.2 ppt GDP slowdown in 1Q19 vs. 4Q18 was related to the drop in fixed investments and destocking. That picture matches with the sectoral data indicating that construction, real estate, and wholesale trade were the main drag on growth in 1Q19. This also correlates with a pause in the state-sponsored investment projects, which is seen in a sharp 19% y/y drop in the budget expenditure on the 'National economy' item.

The good news is that the direct state support to the economy is supposed to pick up, as the spending on the 'National economy' is scheduled to accelerate to the drafted +16% year on year for the full year, as the 'National Projects', which are 70/30 capex/social support, gain traction, and overall budget spending accelerates from 6% y/y in 1Q19 to the drafted 13% y/y for the full-year. The not-so-good news is that the budget spending appears to be the only variable determining otherwise anaemic investment growth. 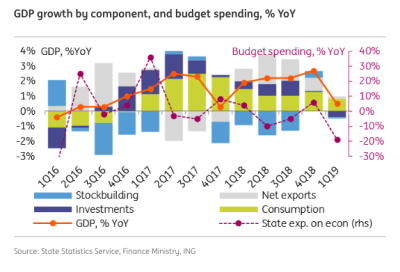 ...but will remain under pressure due to stagnating exports...

The second most important drag on the 1Q19 GDP growth, accounting for around 0.7-0.8 ppt of slowdown, was the deterioration on the net exports side, mainly due to the 0.4% y/y drop in exports after the strong 3-8% y/y growth throughout 2018. This might reflect Russia's OPEC+ commitments, which according to the recent news, are to remain in place at least until the year-end. However, the export volumes might still be somewhat supported through non-oil sectors, including gas, metals, agriculture (good harvest expected this year), and machinery (especially if the pick-up in state investments will translate into more export-focused manufacturing output).

Surprisingly, despite the negative effect of the VAT hike, consumption was only the third most damaging drag on the growth, knocking off only 0.4-0.5 ppt from the 1Q19 GDP growth rate relative to the 4Q18 figure. Still, consumption, which accounts for two-thirds of the Russian GDP is our primary source of concern, at least for 2019-20. The first reason is that the income growth fundamentals appear weak, and we have discussed it in some detail in our previous comments. The second reason is that the growth in retail lending, which has been another source of financing consumption (at least in 2018, as can be seen from the charts below) is now likely to decelerate following the [well founded] concerns by the Bank of Russia (CBR) and the Ministry of Economic Development.

Here are our key thoughts on the matter (illustrated by a deck of charts below):

Overall, while we expect some pick-up in investment growth until the year-end, the prospects for exports and consumption do not seem bright in the mid-term. We continue to expect modest 1.0% GDP growth in 2019. While we do not attribute the current weakness in the economic activity to monetary policy - in our view it has more to do with the budget policy and structural issues - it still might become an additional argument for another key rate cut as early as July. 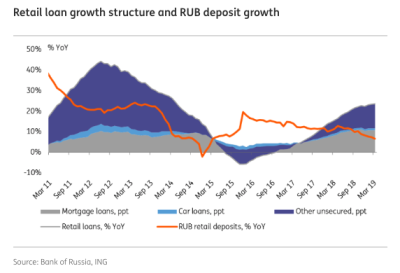 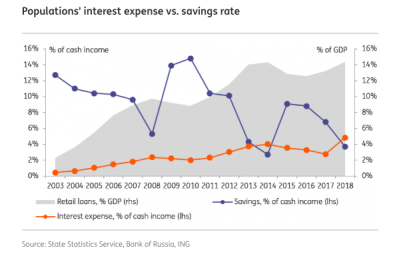 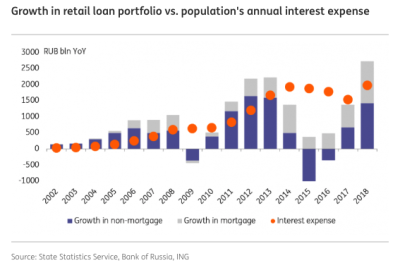 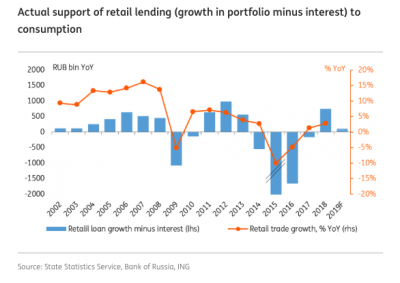 Dmitri Dolgin is the Chief Economist, Russia, at ING in Moscow. This note first appeared on ING’s “Think” portal here.