Inside Kazakstan’s cradle of unrest 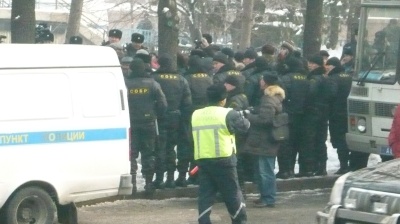 Tight security at a protest in Almaty, Kazakhstan in February 2012, two months after the Zhanaozen massacre.
By Clare Nuttall in Glasgow January 6, 2022

The protests that have threatened to overwhelm the regime in Kazakhstan and erupted into violent and deadly confrontations across the county started just days ago in the remote western oil town of Zhanaozen. A town of around 160,000 people in the mainly desert-like Manglyshak peninsular, Zhanaozen was 10 years ago the site of what had until this week been independent Kazakhstan’s worst violent confrontation between rioters and security forces, when months-long strikes erupted in bloody street battles on the 20th anniversary of Kazakhstani independence.

As bne’s Central Asia bureau chief between 2008 and 2014, I first visited Zhanaozen and the Mangystau regional capital Aktau on a press tour organised by national oil company KazMunaiGas in May 2011. Taking place seven months before the deadly December violence, with hindsight this was most probably a pre-emptive PR exercise as even at the time there were already rumblings of discontent among workers.

Accordingly the tour took in not only a presentation of KazMunauGas’ latest results and a walkabout among the nodding donkeys in the ageing Uzen oilfield, but also a visit to the leisure centre and health centre with a sampling of the (surprisingly tasty) food in the workers’ cafeteria. In the usual model of the single-industry towns (known as monotowns) across Kazakhstan, Russia and the rest of the former Soviet Union, all these were funded and run by the national oil company.

Modern facilities: medical staff and the swimming pool in Zhanaozen, May 2011.

Despite the image given by the company of well-looked-after workers with modern facilities at their disposal, throughout the autumn the situation worsened. By September, protesters were gathering daily in Zhanozen’s main square, angered by the mass firing of over 1,000 staff in an attempt to end the strike action. As the standoff got uglier, the daughter of one of the strike leaders and a young trade union member were killed by unidentified assailants.

Then in December the preparations for a glossy celebration of 20 years of independence – a tone-deaf move given the grim realities on the ground – finally tipped the town over the edge. At least 16 protesters were killed in what later became known as the Zhanaozen massacre.

The authorities – just like now – acted swiftly, sending in a massive secure presence to quash any further opposition, and sealing off Zhanaozen and surrounding areas from the outside world, not a difficult task given its location 140 km from Aktau and around 1,700 km from the capital Nur-Sultan (then Astana).

Unable to enter Zhanaozen, the international press corps in Almaty turned out instead for what the opposition had billed as a ‘Day of Dissent’ just over two months later on February 25, 2012. Unlike at the beginning of 2022, however, the Day of Dissent was small-scale, in sub-zero temperatures the Almaty protest numbered only around 300 people and was dwarfed by the intimidating presence of around 1,000 police officers. 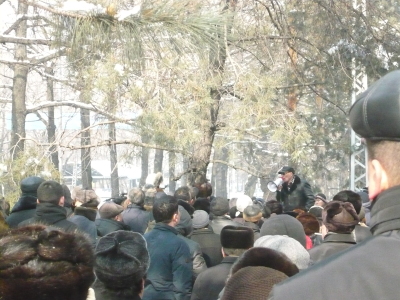 Those protests petered out, never gaining widespread public backing, much less erupting into the mass protests and violence in the opening days of this year

So what has changed?

For 29 years under Kazakhstan’s former president Nursultan Nazarbayev, who finally stepped down in March 2019, the authorities skilfully employed a dual carrot and stick approach whenever unrest loomed, as it periodically did, especially in the remote mining towns, places like Zhanaozen, but also Temiratu and Zhezkazgan in the centre of the country. A clampdown by security forces would typically be accompanied by officials conceding to at least some of the protesters’ demands, offering pay rises, new housing and so on.

This was evident when I went back to Zhanaozen nine months after the riots, in September 2012. The government had made much of the promises of new housing, digital TV and other benefits for the town. What I saw on the ground were freshly painted buildings in the centre, but behind these were the same old shabby apartment blocks as before, in addition to soldiers marching the streets and a palpable air of tension. The investment conference I attended that week in Aktau coincided with the ongoing trial of opposition leader Vladmir Kozlov but scrambled phone connections meant I wasn’t able to make contact with Alga! party activists on the ground.

One change now, of course, is that Nazarbeyev and his first family no longer hold the same preeminent position as they did before, even though he didn’t fully quit, remaining highly influential through a power-sharing agreement with his successor Kassym-Jomart Tokayev. Nazarbeyev was only finally stripped of his powers as head of the State Security Committee on January 5.

Perhaps more importantly, the 2011 violence in Zhanaozen and subsequent protests were triggered by an industrial dispute that turned political. The early 2012 protests were attended by diehard opponents of the regime, despite opposition leaders being rounded up by police beforehand.

This time, while the current events follow several strikes in western Kazakhstan in 2021, the immediate trigger for the protests was a sudden fuel price rise. Nur-Sultan announced that it was restoring some price caps on liquefied petroleum gas (LPG), that many Kazakhs have converted their cars to use because it is cheaper than petrol. Fuel prices are a critical issue in remote towns like Zhanaozen, where almost nothing grows and food has to be trucked in over distances of hundreds of kilometres, but this was an issue that immediately affected Kazakhstanis all over the country who had already seen their standard of living hammered by almost two years of the pandemic.

The success of Kazakhstan’s authoritarian regime was built on the government’s ability to deliver stability and rising living standards (at least for large swathes of the population). For many this provided a tradeoff for the lack of democracy – I witnessed the farcical presidential election of April 2011 where one ‘rival’ to Nazarbayev publicly endorsed the president ahead of the vote, and other elections proceeded along similar lines – together with the blatant kleptocracy of the elite.

In the resource-rich country enough was left over after officials took their share for pay rises to be given to workers, and to build schools, hospitals, universities, transport infrastructure and other investments that made people’s lives better on a day-to-day basis. But when this broke down – as it did after with the financial shock this week – it allowed decades of pent-up tensions to erupt.