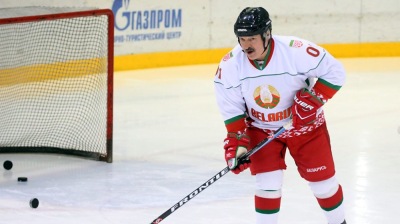 International Ice Hockey Federation (IIHF) has stripped Belarus of the right to hold the World Championship this year
By bne IntelliNews January 19, 2021

The International Ice Hockey Federation (IIHF) has stripped Belarus of the right to hold the World Championship this year and condemned Belarus' self-appointed President Alexander Lukashenko's oppression of mass protests against the falsified elections last August 9, as well as citing public health concerns due to the pandemic, Reuters reported on January 18.

The announcement was greeted with delight in Minsk, where residents shouted “hurray” out of their windows in residential areas after the sun had gone down.

The decision is a blow to Lukashenko, as Belarus is a leading country in international ice hockey and the president himself is often seen on television on the rink playing games with other leaders from CIS countries. Russian President Vladimir Putin is also keen on the game and has played with Lukashenko.

The tournament’s main sponsors, Volkswagen’s Skoda Auto and Liqui Moly, had threatened to pull out if the tournament went ahead as planned in Minsk, Reuters reports, adding to the pressure on the IIHF, which has been reluctant to move the tournament.

The IIHF Council said: “It is currently impossible to ensure the welfare of teams, spectators and officials while holding a World Championship in Belarus.”

The head of the IIHF, Rene Fasel, travelled to Minsk last week for talks with Lukashenko, where he was warmly received. Lukashenko is trying to project a sense of normality in the face of the worst political crisis of his 26 years in office, and holding the ice hockey world championships would have been a feather in his cap if it had gone ahead.

Fasel was criticised for his recent meeting with Lukashenko. Fasel claimed that he had hoped the tournament would help bring the opposition and the state together.

“This is a victory for every Belarusian who knows that hockey is a game and Belarusians are not planning to play with criminals,” she wrote as cited by Reuters. “This is our common victory.”

Many of Belarus’ athletes have come out in support of the opposition movement and made widely shared videos condemning Lukashenko’s crackdown on protesters and denouncing the presidential elections as falsified.

Famous basketball player Yelena Leuchanka, who has twice represented her country at the Olympics, came out early on against Lukashenko, joining the street protests. She was arrested by police and held in jail for 15 days but then denied exit from the country shortly afterwards when she tried to go abroad for regular medical treatment.

“I want us to be free in a new Belarus, where we can freely express our opinions and not be afraid to be fired, imprisoned, fined, beaten or intimidated for it,” the 37-year-old Leuchanka said at the time.

Freestyle skier Hanna Huskova, who was the 2018 Olympic champion in aerials, and swimmer Aliaksandra Herasimenia, a three-time Olympic medallist, have also been prominent critics of Lukashenko.

Herasimenia now heads the Belarusian Sport Solidarity Foundation (BSSF) and said in a statement on this week’s decision by the hockey association: “The IIHF decision has restored the Belarusian community’s faith in justice. Sporting events cannot be held in countries where violence and torture are used against civilians.”

Belarus was due to host the championship together with Latvia. The IIHF said it will now reconsider Latvia’s status as co-host and may now hold the event in a single country in order reduce fans travelling and facilitate social distancing.

Latvian Foreign Minister Edgars Rinkevics said his country would honour its commitment and evaluate how it could host the entire event, which runs from May 21 to June 6, Reuters reports.