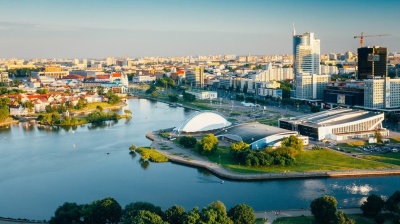 So far the EU has said little about the violent clashes between police and protesters in Belarus, but Minsk is likely to pursue a middle path if the opposition succeeds in taking power / wiki
By Ben Aris in Berlin August 10, 2020

After a night of street fighting and the blatant steal by the incumbent Alexander Lukashenko of the Belarus presidential elections on August 9, the reaction from the international community has so far been muted. Only the presidents of Poland and Lithuania have commented so far, calling for police restraint in dealing with the demonstrations.

As bne IntelliNews reported, Lukashenko claimed a landslide victory in the August 9 presidential elections, with an official exit poll giving him 79.7% of the vote against opposition candidate Svetlana Tikhanovskaya’s 6.8%. However, 20 polling stations that rebelled against the authorities and posted the true vote gave the two contestants almost the exact mirror image number of votes. Thousands citizens immediately took to the streets in towns and cities across the country, where they clashed with riot police in brutal street fighting.

Following the election results the following countries have already congratulated Lukashenko on his “victory:” China, Russia, Kazakhstan, Azerbaijan, Uzbekistan and Tajikistan – all of which have authoritarian leaders. The West, however, has remained largely silent.

The only official reaction from the West was a statement released by Belarus’ neighbours where the presidents of Poland, Andrzej Duda, and Lithuania, Gitanas Nauseda, issued a joint statement calling for calm.

“As neighbours of Belarus, we call on Belarusian authorities to fully recognise and uphold basic democratic standards. We urge [the authorities] to refrain from violence and call for respect of the fundamental freedoms, human and citizen rights, including the rights of national minorities and freedom of speech,” the statement reads.

The statement goes on to carry an implicit threat that if President Alexander Lukashenko uses force to repress the widespread demonstrations, the two countries, and maybe the EU as a whole, will re-introduce stringent sanctions on Belarus.

“We are convinced that closer co-operation with the European Union is in the interests of Belarus, we want the doors for this co-operation to remain open,” the statement said, implying those doors may be closed if violence persists. 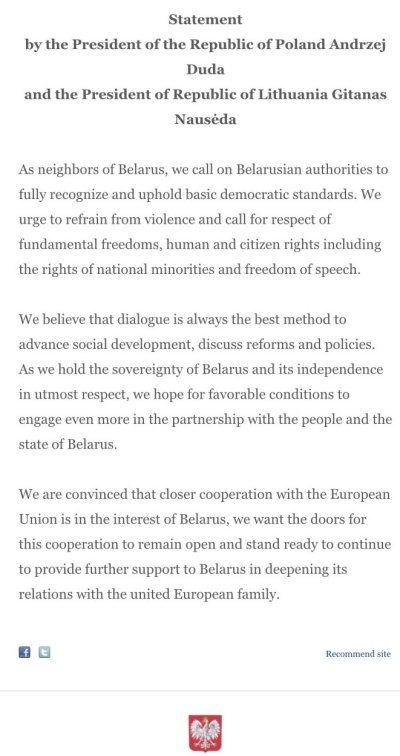 However, there was no official comment from Brussels or the EU leadership on the day.

The German Foreign Minister Heiko Maas did issue a statement on August 7, two days before the elections, saying the German government was “concerned” by events in Belarus and was clearly watching the situation closely.

The US has said nothing in the run-up to the elections or over the weekend. Ties between the US and Belarus have warmed this year after the Trump administration decided to re-open the US embassy in Minsk, and appointed an ambassador in April, after it had stood empty for over a decade.

The Russian foreign ministry has also been quiet on the Belarusian revolution so far, but Russia’s state-controlled media reported the story as it unfolded on August 9 straight. Observers speculate that Russia is most likely to take a “do nothing” stance, as it stands to win regardless of the outcome. But the Kremlin has made it clear the last thing it does want is a new de facto civil war on its door step.

Russian President Vladimir Putin called Lukashenko two days before the elections. “It was emphasised that the Russian side is interested in the preservation in Belarus of a stable internal political situation and the calm execution of the coming presidential elections,” the Russian foreign ministry said in a statement.

If Lukashenko crushes the demonstrations using force as Poland and Lithuania suggest, he will almost certainly bring down stringent sanctions on the country by the EU. Unlike Russia, Belarus is actually a successful manufacturer and exporter, sending its goods in almost equal parts to both western and eastern markets. Amongst its exports are the famous tractors, fridges and the giant MAZ mining trucks. But it also exports food products, metal, potash, furniture and especially IT software services that earn the country billions of dollars a year. access to western markets remains crucial for all these businesses.

Cut off from the West, Lukashenko will find himself entirely dependent on Russian largesse to deal with the mounting economic crisis. Russia has been pushing for a Union State deal that would bring the two economies closer together, an idea that is unpopular with the opposition and citizenship.

Lukashenko has been playing East off against West to get the best deal he can for Belarus. For example, he granted visa-free entry to Belarus to nearly 70 countries last year in a decision that contravenes the terms of the Eurasia Economic Union (EEU), which, like the EU, is supposed to be borderless inside the common area. Moscow was incensed by the decision and re-imposed border controls between Belarus and Russia as a result.

If the opposition wins control of the country, it is highly likely that the new administration will seek a similar deal with Moscow as negotiated by Armenia’s Prime Minister Nikol Pashinian after last year’s Velvet Revolution. Pashinian went out of his way to foster good relations with Moscow as soon as he took power and has met with Russian President Vladimir Putin several times as Armenia’s economy is also highly dependent on trade with Russia.

Svetlana Tikhanovskaya, who nominally won this weekend’s election, has said almost nothing about the opposition’s foreign policy goals, but the opposition movement as a whole has stressed its interest in maintaining Belarusian sovereignty and has not said anything about European values or a desire to join the EU, which in the Ukrainian EuroMaidan demonstrations in 2014 were core goals of that uprising.

Observers concur that most likely a new Belarusian government would adopt some sort of middle path similar to that of Armenia and Kazakhstan, where it acknowledges Russia’s importance but also develops friendly ties with the EU. Even more than Armenia, Belarus remains highly dependent on trade with Russia, which is its major export market. At the same time it has attracted major investment from Moscow and in a new liberal regime would be able to attract a lot more as Russian businesses have been quick to invest into the culturally similar "near abroad" markets such as Ukraine where they share long traditions and a language. An investment from the EU will be much slower to arrive and inter-government aid will come with long negotiations and many strings attached.

For its part Moscow appears to be happy with such an arrangement, as it will retain significant levers over Belarus in the form of the sovereign loans it is already extending, the oil and gas trade as well as access to its massive consumer market. In addition, Belarus is already a core member of Putin’s EEU, which kills off any prospect of Belarus applying for membership of the EU for the time being.