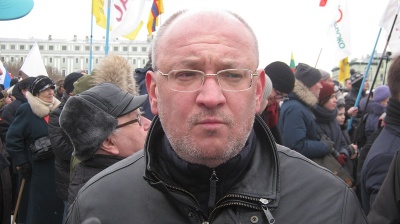 As Russians took to the streets this weekend in over 100 cities in support of jailed opposition leader Alexei Navalny and to clamour against Putin’s two-decade-long rule, Maxim Reznik, an opposition councillor in the St Petersburg’ legislative assembly, Russia’s second-largest city, called the rallies “the Russian people's and truly nationwide.”

“Perhaps for the first time since the 1990s they were really a popular protest – not just opposition rallies anymore,” Reznik told bne IntelliNews in an exclusive interview by phone.

Reznik was one of the three St Peterburg councillors to demand Russia’s Security Service (FSB) investigate the August 2020 poisoning of opposition figure Navalny last August that nearly killed him and saw him hospitalised in Omsk before being medivaced to Germany.

Despite the enormity of the weekend’s protests in Russia, most big-name western outlets are apparently more focused on the power transition in Washington DC than the events in Russia. What do you make of it?

“I am not in a position to comment [on] that, but personally, I was surprised by the huge turnout across the country. Frankly speaking, I thought they will be smaller. What happened this weekend in Russia was really huge – omnipresent, a big blow to Putin and his rule. His influence is obviously fading critically.”

Are the Russian protests fostered in a way by the events in Belarus? Are you seeking to emulate them in Russia?

“Yes, to an extent. The Russian and Belarusian nations are very intertwined – historically, politically, also from the point of the mentality. However, there some differences too. That Belarus [has] failed so far to [get] rid of its dictator [Alexander Lukashenko] is very bad for Russia. If Belarus had by now succeeded in overthrowing him, things would be much easier for us here. The problems the union of Belarus-Russia deals with are very similar in each country. Both Putin and Lukashenko depend hugely on each other now – politically too. I do not see any difference between them – both are the same. Speaking of Putin, all the (political) parties in the Duma are sort of prostitutes – all serving Putin and his interests. This was visible very clearly before the protests this weekend.”

What has not worked so far in Belarus? What are the lessons that the democratic Russian forces ought to learn from the events in Belarus?

“For me, it is hard to tell. I am a legislator, not a political analyst. With no possibilities to seek change legislatively, the streets are the only option we have. Indeed, some say there are many reasons not to hit the streets, but any clever individual understands one thing clearly: they attempted to assassinate Navalny. It is a very good reason to take to the streets. And now we have the other reason to protest: he has been jailed without guilt and will be sentenced. When the people were shouting the word “Freedom!” in the protests, they meant liberty for everyone in Russia – not only Navalny. If he can be put behind the bars – for nothing – everyone in Russia can end up there. I understand that attempting to assassinate an opposition leader in a democratic country is beyond anyone’s perception. But here in Russia it is a grim reality, very sadly.”

Russia will hold parliamentary elections to Duma in the autumn. What tactics do you believe the Kremlin is likely to resort to in order to ensure a victory for Putin’s ruling party United Russia?

“As I said before, it is not the only political party Putin has behind himself. Its very unlikely any new tactics will be used. As in all the previous elections, the authorities will muddle through necessary measures to ensure its win. The possibility that a true opposition representative will get a seat in the new Duma is very low. I can perhaps hope that [independent party] Yabloko will speak out louder, but to what extent – not sure. Regardless of what awaits us ahead we will continue fighting. The events this week have shown that Russia is already different – or getting there despite the clampdown on the protesters. [Reznik is former head of the Yabloko party branch in Saint Petersburg.]”

What about the opposition? Can it unite and speak with a single voice across Russia without Navalny?

“Indeed, many things, and the politics, and perhaps the moves of the opposition are centralised – i.e. coming from Moscow, the capital, where, in fact, additional militia units were brought in to rein in the situation. But the fact that new protests have already been planned for the next weekend – or are still in the pipeline throughout the country – may suggest that this is about to change.”

Last summer, a string of protests erupted in a most unusual, politically little active krai, Khabarovsk Krai, in support of the-then governor, Sergei Furgal, after his arrest. They also rattled, to a lesser degree though, Novosibirsk, Vladivostok and Omsk, and yet failed to ignite nation-wide protests. Is this how the weekend’s events can end?

“I have an answer to that – the internet. While some people did turn up in the events you mentioned, the others – a tangible part – preferred to click the button “like” and “repost” instead of showing up in them. Needless to say, the authorities are monitoring the virtual realm too, making decisions on their own. We will see a change here in Russia, when the people will finally understand that clicking the “like” or “dislike” buttons is not enough. However, the weekend’s events clearly showed that my fellow Russians have changed already – the protests were the Russian peoples’, not the opposition’s. We haven’t seen that kind of protests since the 1990s. It was very heartening and encouraging to see so many young people. Some of them were carrying the slogans: “I love Russia!”, “Freedom!”, etc., and, note, the three-colour Russian flags, not the single red colour Soviet flags.”

Do you believe Yulia Navalnaya, Navalny’s wife, will follow in the footsteps of Svetlana Tikhanovskaya, the presidential hopeful of the democratic Belarusian forces, and seek a Duma seat in autumn?

“I do not know. Yet I’d not equate both women, who have their own lives and life stories. Yulia Borisovna [Navalnaya] herself could answer the question best. Yulia has a big personality and could become a respectable figure in politics on her own, without the support of her husband. I am convinced she will follow her husband and do whatever it takes to continue the fight he’s started. I, however, have a slim hope that Navalny will be freed soon and [that] Yulia will not be needed to replace him – in one way or another. If Yulia decides to wade into politics fully, Russia will only benefit.”

Investors into Russian stocks, bonds and the ruble are holding their breath, waiting to see how bad the widely expected US sanctions on Russia will be. But the growing consensus is that the US sanctions will be light and merely symbolic.

The mine used to be President Japarov's cause célèbre, but these days he has to be more pragmatic.

Trees are one of Russia’s biggest natural resources. Russia's forests stretch half way around the world and it is home to 70% of the planet's entire stock of soft wood – ideal for making paper.