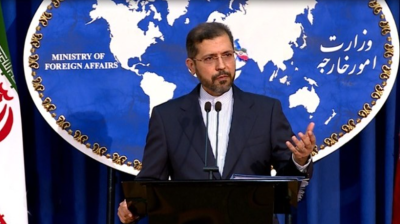 Tehran officials made allusions to Azerbaijan’s friendly relations with Israel as they swiped away Baku’s objections to extensive Iranian military exercises by its border widely perceived as sabre-rattling.

The Islamic Republic has clearly been peeved in recent weeks by a series of war games in Azerbaijan that involved Azerbaijani, Turkish and Pakistani forces and even included Turkish armed forces taking part in naval drills on the Caspian Sea, something the Iranians say goes against the spirit of an agreement that only countries bordering the sea are allowed to deploy military there. But it was the fact that Azerbaijan maintains warm relations with Israel as well as Baku’s purchase over the years of billions of dollars of Israeli arms—including ‘kamikaze drones’, or loitering munitions, which proved devastatingly effective in Azerbaijan’s victory in last year’s Second Nagorno-Karabakh War with Armenia—that were the clear points of reference as Iran’s foreign ministry spokesman Saeed Khatibzadeh responded to a remark from Azerbaijan’s President Ilham Aliyev that he was “very surprised” that Tehran decided to hold drills close to his country’s border.

“It’s clear that the Islamic Republic of Iran will not tolerate the presence of the Zionist regime nears its borders even if it’s just a show, and will take any action necessary to protect its national security,” Khatibzadeh told reporters on September 28. "The drills carried out by our country in the northwest border areas... are a question of sovereignty," he added.

Khatibzadeh also remarked that Aliyev’s comments ran counter to the favourable nature of relations between Tehran and Baku, emphasising that the exercises were called as a contribution to “the entire region’s calm and stability.”

Aliyev has also lately objected to how Iranian trucks have been taking a route across a corner of Azerbaijan to transport supplies to Karabakh territories still controlled by ethnic Armenians. Officials have started charging the drivers of such trucks a road “tax”, while two drivers have been detained. Iran has said that the haulage is conducted by private companies, with the Iranian state having no hand in the use of the route.

The Islamic Republic of Iran and the secular, Muslim-majority state of Azerbaijan share a border of about 700 kilometres and normally enjoy smooth relations. Iran maintains a studied neutrality as regards the conflict between Armenia and Azerbaijan, but regime officials have regularly endorsed Azerbaijan’s standpoint that it is entitled to reclaim territories that are Azerbaijani by international law.

There are around 15mn Iranian-Azerbaijanis among Iran’s 84mn-strong population, mainly living in the northwestern provinces of the country.

Khamenei’s sister speaks out against her brother’s ‘despotic caliphate’
Turkmenistan: A shining city in a book of records
Anti-regime protesters in Iran call for three-day economic strike