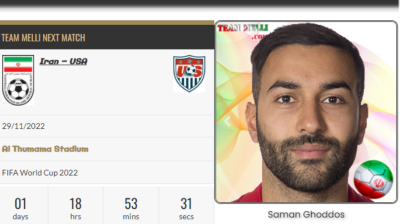 Countdown display on the website of the Iran national football team, aka Team Melli. / www.teammelli.com
By bne IntelIiNews November 27, 2022

There are, of course, more than a few hardline supporters of the Islamic Republic of Iran who have down the years set aflame The Stars and Stripes in protests against the US, the “Great Satan”—so were they among the first to take offence at the weekend when the US Soccer Federation displayed Iran’s national flag on social media without the Islamic Republic emblem?

The calculated snub aimed at Iran—still known to some of America’s more amplified populists as part of the “Axis of Evil”—was delivered ahead of the two nations’ do-or-die World Cup football clash in Qatar on November 29. And it brought a crunching tackle of a response from Iran’s football federation, which wasted no time in demanding from Fifa’s ethics committee that the US team receive a 10-game ban for “offending the dignity” of their country.

US soccer officials explained that the now-deleted graphic was published in support of the anti-regime protesters in Iran, who—despite a death toll estimated by human rights groups at 450 or more, including 63 children—are continuing with demonstrations against the clerical establishment government that have last around two and a half months.

More specifically, they said a decision was taken to not use the official flag on the US Soccer Federation’s social media accounts in order to show “support for the women in Iran fighting for basic human rights”. “Women, Life, Freedom” has become the slogan of the protesters, who first took to the streets after the death of Mahsa Amini, 22, who collapsed and died while in the custody of the Tehran “morality” police, who arrested her for allegedly wearing attire in a fashion that breached Iran’s Islamic dress code.

Iran’s complaint to Fifa was reported by the country’s semi-official Tasnim news agency, which cited a legal adviser at the Iranian football federation.

“According to section 13 of Fifa rules, any person who offends the dignity or integrity of a country, a person or group of people shall be sanctioned with a suspension lasting at least 10 matches or a specific period, or any other appropriate disciplinary measure,” Tasnim reported him as saying.

The news agency also described the US soccer federation as “removing the symbol of Allah” from the Iranian flag. The symbol has four curves with a sword between them to represent the Islamic saying: “There is no god but Allah.”

The flag was introduced in 1980 following Iran’s 1979 Islamic Revolution. Some of the anti-regime Iranian fans attending the World Cup finals have been waving a lion and sun flag, an emblem of the last Shah of Iran, Mohammad Reza Pahlavi, who was deposed by the revolution. Some Iranians who back the protests have been confronted by pro-regime supporters at the World Cup finals.

The weekend also brought televised World Cup remarks from Iran’s Supreme Leader, Ayatollah Ali Khamenei, in which he said: "Yesterday [with the victory against Wales], Team Melli [the national football team] made our people happy. May God make them happy."

In their first World Cup finals match, against England, the team opted not to sing the Iranian national anthem, in what was taken as a show of soliarity with the protesters. But against Wales, most of the team did sing the anthem, albeit in half-hearted fashion. Many observers concluded that, having made their silent protest ahead of the England game, the team would rather now concentrate on football and avoid a scenario in which their footballing campaign becomes swamped by politics.

Amid the unrest in Iran, it is thought that around 50 members of the security forces may also have lost their lives. In his comments, Khamenei turned to this loss in praising Iran’s Basij paramilitary forces, saying: "They have sacrificed their lives to protect people from rioters ... the presence of Basij shows that the Islamic Revolution is alive."

In a reminder of the tragedy still unfolding across Iran, a group of 140 Iranian eye doctors warned that birdshot and paintball bullets used by security forces were blinding many protesters in one or both eyes, Reuters cited reformist news website Sobhema as reporting.

So far, around six protesters have been sentenced to death by Iran’s Islamic courts.

Iran’s judiciary, meanwhile, has charged dissident rapper Toomaj Salehi with spreading “corruption on Earth,” a serious offence that can result in a death sentence. Isfahan’s judicial chief, Asadollah Jafari, was quoted on November 27 as saying that Salehi faces other charges, including “propaganda activity against the establishment, forming an illegal group with the intention of disrupting the security of the country, cooperating with hostile governments, and spreading lies and inciting others to commit violence.”

November 27 also brought confirmation that the authorities have arrested a niece of Khamenei, who recorded a video describing the authorities led by her uncle as a "murderous and child-killing regime.” Farideh Moradkhani has long opposed Iran's clerical leadership and has been jailed previously.

On November 25, there were reports of human rights groups alleging that Iranian security forces were forcing families to bury relatives killed in the unrest in the middle of the night.

The end of last week also brought more indications that Iran is pouring an increasing number of soldiers into restive Kurdish localities to crack down on protesters. Iran has protested to Baghdad that some of the protest groups in these areas have been armed by Iranian-Kurdish militants based across the border in Iraq. Iran has lately targeted such militants with several cross-border missile and drone attacks.