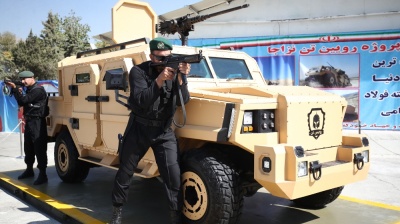 A top Iranian official said on October 3 that Tehran has foiled a plot by Israeli and Arab agencies to assassinate Major-General Qassem Soleimani, head of the elite Quds Force responsible for military operations outside of Iran.

The day also saw the Iranian Army unveil new armoured vehicles, drones and micro-mine units, along with other technology designed to represent the Islamic Republic’s military as a force to be reckoned with.

Iranian state media quoted Hossein Taeb, the security chief of the Islamic Revolutionary Guard Corps (IRGC), as describing to a conference how plotters had planned to buy a property adjacent to the grave of Soleimani’s father and rig it with explosives to kill the commander.

Soleimani is known for mocking US President Donald Trump and has been accused by US Secretary of State Mike Pompeo of having American “blood on his hands” because of the deaths of US soldiers in Iraq that the Pentagon says resulted from Iranian-backed militia operations. In July last year, Soleimani responded to threats made to Iran by Trump on Twitter with a speech that likened him to a gambler and a nightclub owner and derided the performance of US armed forces in Afghanistan.

A key role is played by Soleimani in Iran’s military operations in Syria and Iraq and—provided the assertions of the US and Riyadh that Iran was behind the September 14 strikes on Saudi oil infrastructure are correct—would likely have been involved in the operation in which pre-dawn cruise missile and drone attacks destroyed half of Saudi Arabia’s crude oil processing capacity.

Taeb added that an unspecified number of people had been arrested in the plot, which he claimed had been “years in planning”. He did not name the Arab countries allegedly involved in the assassination plan.

Soleimani’s Quds Force has made an important contribution to efforts that have kept Syria’s President Bashar al-Assad in power during the Syrian Civil War. It also assisted militia who defeated Islamic State in Iraq, though got scant recognition for that feat from the US. All of this means Soleimani has come to be regarded as a key player in the spread of Iranian influence in the Middle East. Israel, determined to push back on that influence, has repeatedly made air attacks on Quds bases in Syria. In August, Israel accused Quds force of planning “killer drone attacks”. Foreign Minister Israel Katz said at the time that Israel was working to “uproot” Soleimani, according to Israeli media quoted by Reuters.

The Iranian armed forces profess to reverse-engineer nearly all of their military technology from foreign equipment that comes into their possession. They have become increasingly self-reliant, although there are always question marks over the genuine capabilities of ‘copied’ versions of military hardware from abroad.

The latest showcasing of newly developed technology for Iran’s armed forces included the “Ruintan” (“Invulnerable”), a Humvee-like vehicle. Allegedly much like its American predecessor, it is said to come with adequate protection for its passengers from improvised explosive devices (IEDs) and missiles while on the move.

Another showcased new vehicle was the “Heydar 1”, a smart micro-robot which looks more like a lunar lander than a military device. The micro-robot is said to be capable of going into battle zones inaccessible to troops to relay information back to base. At least two of the Heydar 1s put on display were laden with Kalashnikovs.

The “Fapod” drone was also displayed. Officials said it can be used for surveillance and rapid reaction. It has an auto-pilot function and can take pictures from great distances, they added.

The Iranian military last unveiled a new drone in 2016, with claims that in flight it could remain undetected by radar.

In December 2014, Iran’s army ground forces for the first time utilised a “suicide drone” in a large-scale military exercise. The ground forces stage a range of different war games each year. Specialised exercises include the use of drones.

An Iranian army officer said that the new technology would be rolled out across Iraq ahead of the Arbaeen pilgrimage on the weekend of October 19-20 which sees more than one million Shia Muslim Iranians cross the border annually.

“Today, we are in a position where we have to defend the country against external threats and in this way we have to indigenise the production of protective equipment. Otherwise, we may sustain irreparable damage,” Heidari remarked.

BREAKING: Ukraine cancels dollar bond sale after NBU governor resigns
5 hours ago
Moldova’s ruling Socialists accused of “abducting” MP after he defected to Pro Moldova
7 hours ago
Ukraine’s NBU governor Smolii quits under pressure from oligarchs
17 hours ago
Russian vote through changes to constitution in referendum, Putin cleared to rule until 2036
8 hours ago
Turkey hit by VW’s scrapping of auto plant plan and refusal by Europe to list country as safe for tourism
14 hours ago