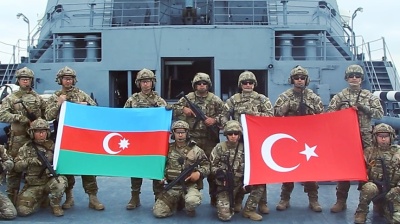 Iran has referred to the "illegality of Turkey's military presence in the Caspian Sea" following submarine attack and defence group military exercises jointly conducted by Azerbaijani and Turkish special forces that ended on September 12.

Iranian Foreign Ministry spokesman Said Khatibzadeh said: "According to the Convention on the Legal Status of the Caspian Sea, with the exception of its five littoral states, in line with a prohibition, no foreign state should have armed forces here. Turkey's military Caspian Sea presence is illegal. We are investigating the matter through the Foreign Ministry."

He said: "Most of the Caspian Basin countries have signed a number of agreements and have made progress in coordinating a kind of status [for the sea]. However, this does not apply to Iran, whose position differs from that of other countries in the region.”

Zulfugarov added that Caspian Basin countries have made statements opposing the militarisation of the Caspian Sea as unacceptable and stating that its waters should only be used by ships sailing under the flags of its coastal states, while also observing: “However, we cannot say that ships sailing under the flags of other countries, especially Turkey, took part in the training of the Azerbaijani Armed Forces. We are talking only about military exercises with the participation of Turkish soldiers. These exercises are part of the defence policy of Azerbaijan and Turkey. In no way do they contradict the issues related to the process of determining the status of the Caspian Sea.

“As the exercises were held on Azerbaijani ships and in the territorial waters of Azerbaijan, we did not violate any Convention provisions. In general, no agreement has been reached on military issues in the legal status of the Caspian Sea… When the issue is finally determined, these details will be settled."

An aide to Azerbaijan’s President Ilham Aliyev and head of the presidential administration’s Department of Foreign Policy Affairs, Hikmet Hajiyev, met with Iran’s Ambassador to Baku Sayyed Abbas Mousavi on September 14. There was no word as to whether Iran’s concerns about the military exercises were discussed. Mousavi simply tweeted: "We discussed the latest developments in our bilateral ties and issues of common concern and interest."