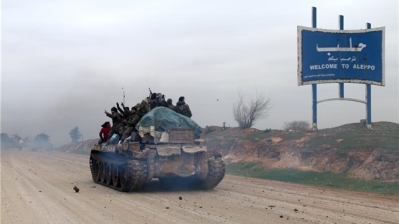 Iran’s “advisory center in northern Syria” reportedly earlier this week issued a statement saying that the Turkish military was continuing to attack positions belonging to the center. While warning that Turkish soldiers in Syria were “within firing range” of the Iranian forces, the center advised the Turkish military “to act wisely” so as not to trigger a retaliatory move by the Iranian side.

The incident—referred to by Alexander von Humboldt, a fellow at the German Institute for International and Security Affairs in Berlin, in a piece written for Al-Monitor—illustrated how the fighting involving Turkish forces and the Syrian army in Idlib, northwestern Syria, not only risks drawing in Russia, which backs Damascus, but Iran, which like Moscow supports the ambition of Syrian President Bashar al-Assad to retake the whole of the country and thereby end its civil war.

Turkish President Recep Tayyip Erdogan and Russian counterpart Vladimir Putin are due to meet on March 5 for talks aimed at resolving the showdown.

Meanwhile, the Iranian Foreign Ministry this week called for holding a new Iranian-Russian-Turkish summit within the framework of the UN-supported Astana process to address the fate of Idlib, where the Syrian rebels have their last bastion.

The latest round of escalation in Idlib began on February 27, when at least 33 Turkish soldiers were killed in a military airstrike in a rebel-held area of Idlib province. There are suspicions that Russian jets were behind the strike, but Ankara has accused Damascus of being behind the attack. Turkish Defence Minister Hulusi Akar claimed the Syrian government deliberately targeted Turkish soldiers “despite warnings”. Russia claimed the Turkish forces were “in the battle formations of terrorist groups.” Iran, on the other hand, emphasised the need to immediately “manage and calm the current tense situation.”

However, the situation became even more fraught when the Turkish military’s retaliatory operation against Syrian positions caused the death of several Iran-backed forces in Syria’s northwest, along with Syrian soldiers. Iranian media reports stated that at least four fighters affiliated with Lebanese Hezbollah, as well as 21 members of the Fatemiyoun and Zainebiyoun brigades—which consist of Afghan and Pakistani Shiite forces supported by the Islamic Republic—were killed in the Turkish strikes. It was after these strikes that Iran’s “advisory center in northern Syria” issued its March 1 veiled threat to Turkey.

The Iranian advisory center’s statement came as a surprise to those following Iran’s involvement in the Syrian crisis, as almost nobody had previously heard of the existence of such a center, according to Azizi.

The advisory center said forces from Iran’s Islamic Revolutionary Guard Corps (IRGC) along with Hezbollah and other “resistance” forces have been involved in securing the Syrian government’s control over the strategic M5 highway that connects Damascus with Aleppo. Forces supported by Turkey have been attempting to regain control of the highway.

Azizi added: “Meanwhile, although Iran used to depict its proxies fighting in Syria as ‘voluntary groups’ formed to fight the terrorists, the latest statement makes no distinction between the IRGC forces on the ground and those Iran-backed forces, which it calls ‘resistance groups.’ The statement seems to contain a tacit warning that any Turkish targeting of these groups would be considered an attack on the Iranian military.”