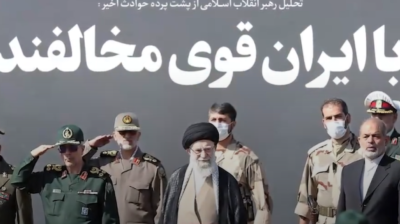 Iranian press coverage of the supreme leader's address to a graduation ceremony of police and armed forces cadets, during which he made his first comments on the unrest. / IRNA screengrab of news digest.
By bne IntelIiNews October 3, 2022

Iran's supreme leader has blamed the US and Israel for the protests that have swept the country for more than two weeks.

In what were his first public comments on the unrest—which has morphed into anti-regime demonstrations, but was initially triggered by the uproar over the death of 22-year-old Mahsa Amini, who fell into a coma and died after being detained by Tehran morality police for allegedly breaking the Islamic dress code by loosely wearing a hijab, or headscarf—Ayatollah Ali Khamenei said "riots" were "engineered" by Iran's arch-foes and their allies. He gave his strong backing to the security forces.

President Joe Biden, meanwhile, issued a statement saying he was "gravely concerned" that there were reports of an "intensifying violent crackdown on peaceful protestors".

Norway-based Iran Human Rights said on October 2 that at least 133 people had been killed by security forces in the unrest so far. There are fears the total could be much higher. After Iran put down unrest it experienced in 2019, a Reuters analysis concluded that around 1,500 people were killed in the security response.

The protesters in the demonstrations prompted by the death of Amini were calling for "just and universal principles", Biden added. The US "stands with Iranian women" who were "inspiring the world with their bravery", he added.

Women have led the protests, waving their headscarves in the air or setting them on fire. "Woman, life, freedom!" has become a rallying cry in the unrest.

Khamenei spoke while addressing a graduation ceremony of police and armed forces cadets.

He told his audience that Amini's death “broke our hearts”, but hit out at some of the reaction, saying that “what is not normal is that some people, without proof or an investigation, have made the streets dangerous, burned the Quran, removed hijabs from veiled women and set fire to mosques and cars".

Unfriendly foreign countries had planned the "rioting" because they could not tolerate Iran "attaining strength in all spheres", he said.

"I say clearly that these riots and the insecurity were engineered by America and the occupying, false Zionist regime [Israel], as well as their paid agents, with the help of some traitorous Iranians abroad," he declared.

On October 2, security forces violently cracked down on a protest by students at Sharif University of Technology in Tehran. Security forces tried to enter the campus, but the students drove them back and closed all the entrance gates, a BBC correspondent reported. However, she added, a siege developed and students who tried to leave through an adjacent car park were picked up one by one and beaten, blindfolded and taken away. The siege, said the BBC reporter, was ended later in the night after the intervention of professors and a government minister. On October 3, students at the university said that they would not return to classes until all of their fellow students were released from detention.

“Hard to bear what is happening at Sharif University in Iran,” the German foreign minister, Annalena Baerbock, tweeted on October 3. “The courage of the Iranians is incredible. And the regime’s brute force is an expression of sheer fear of the power of education and freedom.”

Education trade union leaders called for a nationwide strike by teachers and students in response to the violence at Sharif University and other locations. Iran's oil workers have already threatened a strike should the crackdown be stepped up.

Despite the severity of the crackdown, all the indications were that students were out in force in large numbers to protest again in Tehran and Isfahan on October 3.