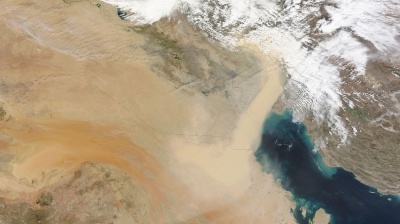 Of late, the clouds of war appear to have been settling over the Gulf. But there may be signs pointing to a viable rapprochement.
By bne IntelliNews October 2, 2019

A tantalising scent of a viable but still very elusive rapprochement between Iran and its foes was in the air on October 2.

Early in the day, following a cabinet meeting, Iranian President Hassan Rouhani said live on state TV that a plan for talks presented to the US and the Islamic Republic by French President Emmanuel Macron was broadly acceptable to the Iranians. Rouhani simply noted that some wording would require changing in the plan, which would require Iran to give a new guarantee that it will not develop nuclear weapons and help preserve the security of the region and its waterways. In return, Washington would have to remove all the sanctions it has hit Iran with since unilaterally walking out of the 2015 nuclear deal struck by Tehran and six world powers. Such a move would allow Iran to immediately resume oil sales currently hindered by the US strategy of attempting to drive exports of Iranian crude to zero.

Of course, that might all seem eminently reasonable, but then one also has to factor in the blustery, highly unpredictable US President Donald Trump when deciding if there is actually some kind of steady course that can be set.

Rouhani said he told his cabinet that mixed messages about sanctions were received from the US while he was in New York last week for the United Nations General Assembly. It was, he said, not acceptable for Trump to say publicly that he would step up sanctions while the European powers told Iran in private that he was in fact willing to negotiate.

“The American president on two occasions ... said explicitly that we want to intensify sanctions. I told these European friends, so which part should we accept? Should we accept your word that you say America is ready? Or the words of the president of America who in 24 hours said explicitly twice ... that I want to intensify sanctions? [The Europeans] didn’t have a clear answer,” Rouhani said, according to a Reuters translation.

So tough are the US sanctions that Tehran describes them as an “economic war” and “economic terrorism”. There’s little love lost between Iran and regional arch rival Saudi Arabia and the fact that the Saudis are perhaps only behind the Israelis in their enthusiasm for the US plan to throttle the Iranian economy with sanctions—and thereby force Tehran to accept a diminished role in Middle East affairs and stop arming proxies in regional conflict zones—means the Iranians struggle to contain their anger at Riyadh. But October 2 also saw Iran’s oil minister, Bijan Zanganeh, attempting to ease tensions with Saudi Arabia, which threatened to boil over after the September 14 cruise missile and drone attacks on Saudi oil facilities. Zanganeh called his Saudi counterpart, Prince Abdulaziz bin Salman, “a friend” and said Tehran was committed to stability in the region.

“Prince Abdulaziz bin Salman has been a friend for over 22 years,” Zanganeh said, speaking at a top Russian energy conference chaired by Russian President Vladimir Putin, where he met Prince Abdulaziz as well as OPEC’s secretary general Mohammed Barkindo.

Prince Abdulaziz, a senior member of the Saudi royal family who became energy minister last month, was later seen holding hands together with Barkindo and speaking on the sidelines of the conference, news agencies reported.

Washington and Saudi Arabia have both stated that Iran was behind the attacks, which wiped out half of Saudi oil production capacity. However, they have not presented conclusive evidence, and Iran is sticking to its claim that the attacks were launched by the Iran-aligned Houthi rebels in Yemen who are fighting a vicious civil war against Saudi-backed forces. At the conference, Prince Abdulaziz notably refrained from commenting on who might have been behind the attacks.

Putin on the other hand weighed into the matter, saying: “We object to blaming Iran for this attack simply because there is no evidence. Yesterday, we discussed it with Rouhani. His position is simple—Iran is not responsible for this.”

More hope in statement from al-Jubeir

More hope that a defusing of tensions between Iran and the US and Saudi Arabia is on the horizon was, a little ironically, brought by an October 2 statement from Adel al-Jubeir, the Saudi minister of state for foreign affairs, in which he said reports that the kingdom had sent messages to Rouhani via the leaders of third countries were “not accurate”.

The claim was made on October 1 by an Iranian government spokesman.

“What the Iranian speaker said about the kingdom sending messages to the Iranian regime is not accurate,” Jubeir said on Twitter.

“What happened was that sister countries sought to calm the situation, and we told them that the position of the kingdom was to always seek security and stability in the region.”

In an interview broadcast in the US on September 29, Saudi Arabia’s de facto leader, Crown Prince Mohammed bin Salman, warned that oil prices could spike to “unimaginably high numbers” and wreck the global economy if the world did not come together to deter Iran, but he added that he preferred a political solution to a military one.

“We also told them [the sister countries] that de-escalation should come from the party that is escalating and spreading chaos through hostile acts in the region,” Jubeir added.

“...We conveyed to them our position towards the Iranian regime that we always announce clearly in all venues, most recently at the United Nations General Assembly,” he said.