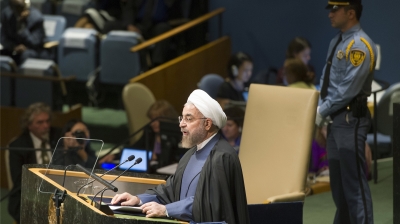 Rouhani addresses world leaders at the UN General Assembly in New York.
By Will Conroy in Prague September 27, 2019

Iranian President Hassan Rouhani claimed on September 27 that the US this week offered to drop all sanctions on Iran in exchange for nuclear deal negotiations.

US President Donald Trump swiftly rebutted the claim, tweeting that it was in fact Iran that suggested such a quid pro quo and that he responded “Of course, NO!”

“The German chancellor, the prime minister of England and the president of France were in New York [for the annual United Nations General Assembly] and all insisted that this meeting take place. And America says that it will lift the sanctions,” Rouhani said on his official website. “It was up for debate what sanctions will be lifted and they [the United States] had said clearly that we will lift all sanctions.”

The US State Department called the claims “baseless,” adding that the US was absolutely committed to upholding its sanctions regime, which includes a strategy of attempting to drive all Iranian crude oil exports off world markets.

Iran has been wary of entering into any face to face talks with Trump, saying that it was likely that the US president just wanted a foreign policy photo opportunity. Tehran also often attacks the character of Trump, saying he is not somebody that could ever be trusted.

The line taken by the Iranians in recent weeks is that there will be no bilateral talks with the US, but if Washington was to lift the sanctions it would receive an invitation to enter multilateral talks with the remaining signatories of the nuclear deal, namely Iran, the UK, France, Germany, China and Russia.

While he was in New York, Rouhani was particularly urged by French President Emmanuel Macron to take the opportunity to meet Trump. Rouhani said he relented to the extent of meeting some US officials at the insistence of France, the UK and Germany but was not minded to explore the US offer to drop sanctions in return for a meeting with Trump because of the “toxic atmosphere”. After it became clear there was zero chance of any meeting, Trump, who dismissed Macron’s attempts at mediation, announced he had authorised officials to bar senior Iranian officials and family members from entering the US as immigrants or non-immigrants.

Rouhani responded to that move by saying it had no impact as "Iranian officials have no desire to travel to America.” He added: “We only come here for the UN events."

Iran ‘wants UN HQ moved out of US’

Fox News on September 26 reported that Rouhani told a press conference that his country's delegation would vote for the UN headquarters to be moved out of New York if given the chance. “If we’re ever asked, we will, of course, vote for it, for the United Nations headquarters to be transferred to a more secure and better country that does not have the narrow viewpoints that we have been witnessing,” he was reported as saying in response to a question from a reporter.

Opting not to go for an instant military response to the September 24 drone and cruise missile attacks that wiped out half of Saudi Arabia’s oil processing capacity—blamed on Iran by the US and Europe’s major powers, which describe Tehran’s contention that the strikes were mounted by Houthi forces fighting Saudi-backed forces in Yemen’s civil war as implausible—the US continued tightening the sanctions screw even while Rouhani was in New York.

Some of the new sanctions have been imposed on Chinese entities and people suspected of transferring oil from Iran. Beijing on September 27 reacted to the move by accusing Washington of “bullying”, saying China’s cooperation with Iran is legitimate and legal.

In another blow to the attempt by the US to cripple Iran’s economy to the point where the Iranians will negotiate a new nuclear deal—which if Trump has his way would apply much tougher restrictions on Iran’s nuclear development programme, curb its ballistic missile programme and end support provided by the Islamic Republic to allied militias in Middle East conflict zones—Turkey’s President Recep Tayyip Erdogan, while flying back from the UN gathering on September 27, told reporters on his flight that it was impossible for the Turks to stop buying oil and natural gas from neighbouring Iran, and added that trade between Iran and Turkey would continue.

John Kilduff of Again Capital was quoted by CNBC on September 27 as saying that if there was a breakthrough in talks that saw the US remove its sanctions against Iranian oil it would have a substantial downward impact on the oil price.

“There’s been a big bearish risk from a thaw in the US Iran situation for some time and this will put a remarkable amount of oil back onto the market immediately if it were to occur,” he reportedly said.

How the US and Saudi response to the attacks on the oil facilities will evolve remains to be seen. Some analysts are convinced Trump will remain very wary of any military engagement with Iran that could result in a Middle East war that would prove unpopular with some of his core supporters during his 2020 re-election campaign. But as the world knows by now, Trump is entirely capable of surprise moves.

Rouhani this week warned world leaders gathered at the UN headquarters that the Gulf region is “on the edge of collapse, as a single blunder can fuel a big fire”.

“We shall respond decisively and strongly to any sort of transgression to and violation of our security and territorial integrity,” he added.

However, in the penultimate sentence of his address, Rouhani raised the possibility of resolving the Gulf standoff, saying: “This is the message of the Iranian nation: Let’s invest on hope towards a better future rather than in war and violence. Let’s return to justice; to peace; to law, commitment and promise and finally to the negotiating table.”

US pulls waivers on civilian nuclear cooperation with Iran