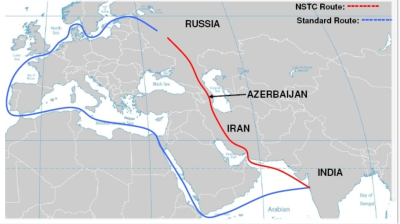 The Ukraine conflict has reportedly resulted in a surprising surge of trade flows from Europe to the East and South via Iran. Given transit restrictions applied amid penalties imposed on Russia, consignments are being diverted via the International North-South Transportation Corridor (INSTC) that traverses Iranian territory to reach the Indian Ocean.

“This ongoing trend saw Iranian goods transit increase 52% in March and creates something of a political quandary for both the European Union and United States, as Iran, like Russia is also under significant US sanctions. Washington would prefer not to see any Iranian international trade or the facilitation of this, whereas Europe needs this access route to Asia following Russia sanctions [introduced in response to Moscow’s invasion of Ukraine],” noted Silk Road Briefing in a May 23 assessment of the unexpected development.

It added: “At some point, the United States is going to make a call whether attaching the European Union to its own North American supply chains is more desirable than allowing Iranian trade to flourish. For now, Iran is being tolerated, however one can expect gradual, possibly decade-long sustained pressure to see that this is eventually reversed, and that North American trade routes eventually take priority for the EU over Iranian and Asian ones.”

Iran, still under heavy US sanctions, is gaining from the Ukraine conflict in that Europe’s punitive economic response to Moscow’s waging of war on Ukraine has caused the closure of the EU’s Northern border with Russia. Thanks to INSTC, originally intended as a link to boost India-Iran-Central Asia commerce, Iran is a beneficiary.

The big attraction of INSTC is its key hub, namely Iran’s sole oceanic port, Chabahar, on the Sea of Oman opening out into the wider Indian Ocean. INSTC was also presented as a transit option via Russia offering routes running from and to European ports, including Helsinki. But, given events, it has now become a key part of the Southern Route running between Europe and Asia.

INSTC connects the Caspian Sea to the Persian Gulf, allowing European goods to transit east from the EU’s southern ports in Italy and Greece and from the Black Sea ports of Bulgaria and Romania. Trade flows can go via Turkey and Georgia to Azerbaijan’s Caspian Sea Port of Baku before moving south through Iran to markets in East Africa, the Middle East, Pakistan and India, among other destinations.

At present, the Iranian sections of INSTC are multi-modal road-rail connections, but rail construction is continuing, with officials saying it should be fully completed next year.

“This is having a significant impact in how Iran is now being seen as a vital link between Europe and Asia. To help speed up delivery times, Iran’s international cargo transportation through its airports increased by 128 percent, in the first month of the current Iranian fiscal year (March 21 through April 20, 2022), according to statistics of the Iranian Airports and Air Navigation Company,” added Silk Road Briefing.

Iran’s airports are undergoing significant upgrades. Both Chinese and Russian contractors have been retained to develop 116 Iranian airports in stages over the next two decades.