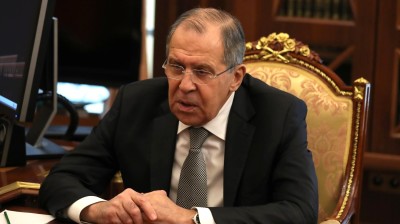 Grasping the context of what caused the human error was important, Lavrov told the media.
By bne IntelliNews January 17, 2020

Russian Foreign Minister Sergei Lavrov said on January 17 that Iran’s accidental shooting down of an Ukrainian airliner last week took place at a time when Tehran was on edge after reports of advanced US stealth fighters in proximity to Iran.

“There were at least six [US] F-35 fighters in the air in the Iranian border area [at the time]. This information has yet to be verified, but I’d like to underline the edginess that always accompanies such situations,” Lavrov said at his annual news conference in Moscow.

The January 8 downing of Ukraine International Airlines (UIA) flight PS752, leading to the loss of all 176 people aboard after the aircraft came down in a fireball in a suburb of Tehran, sparked days of protests after the Iranian military admitted it had shot down the plane accidentally, coming clean after three days of denials from officials that the plane could have been shot down.

Lavrov described the incident as a human error but added that he was not trying to excuse anyone for what happened. Grasping the context of the incident was important, he said, pointing out that it occurred just hours after an Iranian missile attack on bases in Iraq used by US forces, when Iranian forces were braced for some kind of US military retaliation.

US President Donald Trump had spoken of reprisals that might be “disproportionate” if US soldiers were harmed by any attack made by Iran in response to the January 3 assassination of second most powerful Iranian official Major General Qasem Soleimani in a drone missile strike at Baghdad airport ordered by Trump. He had even talked about including Iranian cultural sites in the retaliation, but later backed off from that threat.

In admitting to the shooting down of the UIA Boeing 737, General Ali Hajizadeh, head of Iran’s Islamic Republican Guard Corps (IRGC) aerospace division, apologised to the nation on television for the tragedy. He said the Corps took full responsibility, saying he wished “I could die” when he heard about the incident.

A missile operator acting alone because of a “communications breakdown” mistook theplane for a cruise missile heading towards a sensitive IRGC site, he said, adding that he had 10 seconds to decide whether to fire. “He was obliged to make contact and get verification. But apparently, his communications system had some disruptions. Either the ‘jamming’ system was the cause or the network was busy,” he said.

“There is information that the Iranians were expecting another attack from the United States after the strike but did not know what form it might take,” said Lavrov.

11 US troops ‘concussed after Iran strike’

The US initially said that none of its troops were injured by the Iranian missile strikes on the Iraqi bases. However, on January 16, it said 11 service members who were stationed at the al-Asad base in western Iraq had been treated for concussion.

Capt Bill Urban, a spokesman for US Central Command, said in a statement: “While no US service members were killed in the 8 January Iranian attack on al-Asad airbase, several were treated for concussion symptoms from the blast and are still being assessed.”

As a measure of caution, some service members were taken to US facilities in Germany or Kuwait for “follow-on screening”, he added.

“When deemed fit for duty, the service members are expected to return to Iraq,” he said.