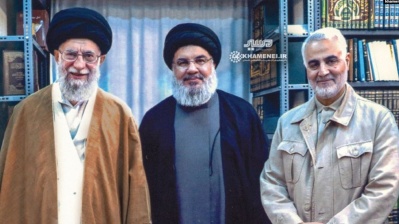 Tehran-backed militias critical to Iran’s efforts to maintain control over Iraq who were mentored by assassinated Iranian Major General Qasem Soleimani have reportedly been placed under the guidance of Tehran-backed Lebanese organisation Hezbollah.

Hezbollah urgently met with Iraqi militia leaders, seeking to unite them in the face of the huge void left by the death of Soleimani, killed in a US drone strike at Baghdad airport on January 3, two sources with knowledge of the meetings were on February 11 quoted as saying by Reuters. The meetings were meant to coordinate the political efforts of Iraq’s often-fractious militias. They lost not only Soleimani but also Abu Mahdi al-Muhandis, a unifying Iraqi paramilitary commander, in the drone attack.

The Shi’ite Hezbollah group, founded by Iran’s Islamic Revolutionary Guard Corps (IRGC) in 1982 and designated a terrorist group by the US, has been at the heart of Iran’s regional strategy for years. It helped Soleimani—who for more than two decades headed the IRGC Quds Force that runs Iranian military operations beyond Iran, but was also widely regarded as the Islamic Republic’s second most powerful official—train paramilitary groups in both Iraq and Syria.

One pro-Iran regional official was cited as saying that Hezbollah’s guidance of the militias would continue until the new leadership of the Quds Force got a handle on the political crisis in Iraq.

Sheikh Mohammad al-Kawtharani—the Hezbollah representative in Iraq who worked closely with Soleimani for years in guiding the Iraqi militias, hosted the urgent meetings between Hezbollah and the militias—the Iraqi sources reportedly said, adding that Kawtharani berated the groups—as Soleimani had done in one of his final meetings with them—for failing to come up with a unified plan to contain popular protests against the Baghdad government and the Iran-supported paramilitaries that dominate it.

Kawtharani will face perhaps insurmountable difficulties in dealing with the militias given how a lot of the faction leaders see themselves as “too big and important to take orders”, one source said, noting: “For now, because of pressure from Iran, they’re cooperating with him, but I doubt that will continue and the Iranians know that.”

Hezbollah leader Hassan Nasrallah is seen as overseeing Kawtharani’s efforts. In two lengthy televised addresses, Nasrallah has paid homage to Soleimani and vowed to avenge his death. He has also declared it a goal of Hezbollah and its allies to eject US forces from the Middle East once and for all. The US still maintains some 5,000 troops in Iraq.

The US on September 21 imposed sanctions on 27 individuals and entities involved in Iran’s nuclear development, ballistic missile and conventional weapons programmes as it pushed ahead with its ... more