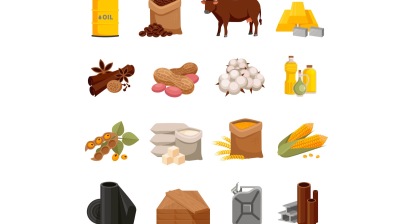 Commodity prices across the board will surge. / bne
By bne IntelliNews March 9, 2022

Iron ore, coking coal, nickel, palladium group metals (PGMs), as well as corn and wheat are in focus as the commodity markets brace for supply disruptions as a result of the Russian military invasion of Ukraine.

As followed by bne IntelliNews, only hours after the US announced a ban on oil imports from Russia, Russian President Vladimir Putin struck back with counter-sanctions that will ban the export of Russian commodities until the end of 2022. The list of commodities and export destinations will be determined by the government by March 11.

Global commodity prices across the board have already spiked, with many of them setting new all-time highs as the war in Ukraine goes into its second week, with no sign of ending soon.

Sova Capital reminded on March 9 that Russia and Ukraine accounted for a sizeable share of seaborne iron ore markets in 2021, as Ukraine exported 50mn tonnes and Russia 22mn tonnes of iron ore products in 2021.

The biggest producer of iron ore in Russia is Metalloinvest. The company estimates its iron ore reserves at 15.4bn tonnes (versus Russia’s total 25bn tonnes), and claims it has second-largest reserves in the world. The company is controlled by Russian billionaire Alisher Usmanov, who is now directly sanctioned by the US and the EU. Usmanov’s stake in USM Group (main shareholder in Metalloinvest) is less than 50%, and technically this exempts Metalloinvest from sanctions. However, short- to medium-term sanction risks for the company remain high.

"A potential disruption in the iron ore supply from Russia and Ukraine – particularly via Black Sea routes and ports – should lead to higher premiums for iron ore contracts in the Atlantic basin," the analysts believe.

Russia also exports about 23-25mn tonnes per year (tpy) of coking coal, mostly supplied to Asian markets (China, Japan and South Korea). "Given the size of the Asian market, the dominant role of Australia's supply of coking coal on it and uninterrupted logistics, we see a low risk of a physical shortage for coking coal," Sova Capital analysts wrote.

Russia also accounts for 22% of the world's high-grade nickel output, and in 2021 the country produced 2.81mn ounces of palladium and 0.81mn ounces of platinum, accounting for a respective 44% and 15% of the global palladium and platinum supply. The biggest producer of nickel, also investing heavily in PGMs, is Norilsk Nickel.

Previously the analysts of Aton Equity reminded that Russia is also a major supplier of zinc, as well as wheat and corn.

As followed by bne IntelliNews, Russian state-controlled bank VTB has been the main target of the UK and US sanctions in response to Russia's military invasion of Ukraine. In the past few years VTB has been hoovering up assets in the grain export sector and now controls about a fifth of the business, becoming the largest operator of grain infrastructure in the process.

Last month VTB Bank has cut its stake in Demetra Holding, which unites its grain assets, to 45% from the controlling 50% plus one share in order to duck sanctions.