Is Libya the new Syria?

Is Libya the new Syria? Such is the fraught, even Gordian state of affairs in the conflict-riven North African state, involving multiple actors with contrary interests, this has become a rather unsettling question.

So what do we know with any certitude? Well, as things stand, Turkey’s involvement has altered the course of the six-year-old Second Libyan Civil War. In helping the Tripoli-based Government of National Accord (GNA), led by Prime Minister Fayez al-Sarraj, push back the rebel Libyan National Army (LNA) forces of Marshal Khalifa Haftar, Ankara has usefully showcased its impressive drone warfare capabilities, but it has its eye on far more than drone sales. A share in the oil, contracting work worth billions of dollars and “neo-Ottoman” military prowess and adventurism that might help Turkish President Recep Tayyip Erdogan in restoring his fortunes back home with an electorate soured by years of economic woe—these might be said to be the three chief objectives of Turkey in chancing its arm in Libya. 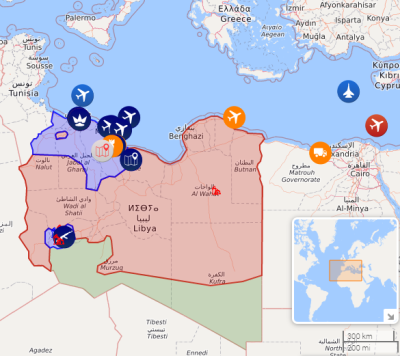 Map from libya.liveuamap.com shows the extent of territory controlled by the GNA in the northwest, with most of the rest of the country still under the LNA. The live map also keeps track of flights (including those carrying suspected military supplies and soldiers) entering and leaving Libya.

Ranged against the UN-recognised GNA and Turkey (which only really has Qatar as a clear ally when it comes to the Middle East) are LNA backers including Egypt, the United Arab Emirates (UAE), Saudi Arabia, Chad and, diplomatically at least, France, Greece and Cyprus (these last two are worried a confirmed, strategic presence in Libya will allow Turkey to project its strength in demanding Mediterranean oil and gas they say it has no geographical right to). And then there is Russia. What exactly is Russia up to?

The Libyan conflict has come very much back into the headlines of late not only because of Turkey’s success, but also due to Moscow’s brazen response—as Haftar’s soldiers last week retreated from their last toehold in western Libya, the Kremlin, according to US Africa Command (AFRICOM) flew 14 MIG-29 and Su-24 fighter jets, stripped of their markings, via Syria and Iran to two remote desert airfields. Though Russia offers no open support to Haftar—based in the port city of Tobruk on Libya’s eastern Mediterranean coast where a body claiming to be the country’s legitimate House of Representatives sits—it has long been common knowledge that around 2,000 Russian mercenary soldiers, by now boasting Pantsir air defence systems amid their ranks under Russia’s private military contractor Wagner, are present in Libya to back him. 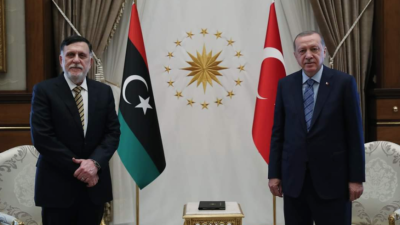 AFRICOM said the combat aircraft were “likely to provide close air support and offensive fires” for the Wagner fighters, with most of the jets located at the Jufra base deep in the central Libyan desert. Washington, which has said it wants all foreign actors out of Libya, is on edge. Russian President Vladimir Putin now has access to two air bases in Libya, strengthening the growing Russian presence around the Mediterranean and there are fears he might want to make that, and perhaps more, a permanent arrangement. The commander of AFRICOM, Gen. Stephen Townsend, said of the Russian move: "Just like I saw them doing in Syria, they are expanding their military footprint in Africa using government-supported mercenary groups."

CNN, meanwhile, on June 9, carried further comments from AFRICOM in which it said: "If Russia is allowed to effectively shape the ultimate result of the Libya conflict, the US, and especially Nato and Europe, will not like the outcome."

Syrian militiamen on both sides

Another intriguing aspect to the new phase of the Libyan conflict is that both Turkey and Russia have been flying in Syrian militiamen from the nine-year-old civil war in Syria to serve as proxy fighters, but this week also saw attention turn to how Egypt might respond to changing events on the ground brought about by Erdogan’s redoubled efforts to score a success in Libya. There is no love lost between the Turkish leader and Egyptian President Abdel Fattah el-Sisi, but there is also no clear indication as yet that the latter is contemplating putting boots in the battlezone. 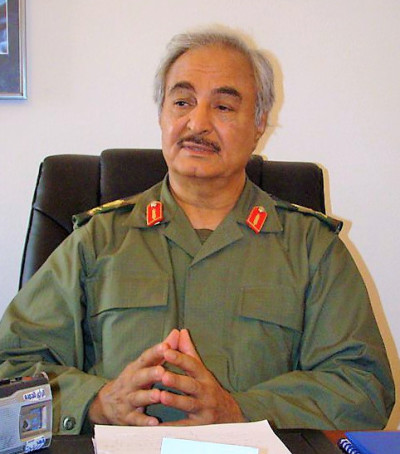 The forces of Haftar have had to fall back and regroup (Credit: Magharebia).

With the 76-year-old Haftar’s 14-month offensive to take Tripoli repelled, Egypt, along with the UAE and Russia, is reportedly active in supporting the LNA effort to fight off a GNA bid to retake the strategic city of Sirte—located south of the Gulf of Sirte between the capital and second most populous Libyan city Benghazi—as well as the al-Jufra air base and the oil fields to the south. Haftar accepted a ceasefire proposal sponsored by Sisi during a visit to Cairo on June 6, but Sarraj has dismissed the truce, as has Turkish Foreign Minister Mevlut Cavusoglu, who told Turkish daily Hurriyet it was simply a ploy to save the commander’s skin following his losses on the battlefield. Said Cavusoglu: “The ceasefire effort in Cairo was stillborn. If a ceasefire is to be signed, it should be done at a platform that brings everyone together. The ceasefire call to save Haftar does not seem sincere or believable to us.”

How hard the GNA will push east is open to question. “There are elements inside the GNA camp who want to capitalise on recent successes and push as far east as they can go,” Alison Pargeter, a senior research fellow at King’s College London’s School of Security Studies, told Al Monitor, also noting: “So far, however, they have met with resistance in Sirte, which is likely to fight hard against the GNA for a host of reasons, including old animosities between Sirte and Misrata.”

Pargeter added: “The failure of the Tripoli campaign may well have dented some of Haftar’s stature, especially in the international community, but it is premature to write Haftar off yet,” Pargeter also said, adding, “He still has strong support in the east of the country, and at the moment there is still no alternative to him in the eastern region.”

Turkey remains an irreplaceable ally at the crossroads of Europe and the Middle East to both Russia and the US and, with the Turkish president adept at playing both sides, this week brought more phone calls between Erdogan and Putin and Erdogan and Trump. As so often, the available information on how those calls turned out was fuzzy.

What Donald Trump—rather busy with his domestic scene nowadays—thinks about matters in Libya remains an open question, despite Erdogan making typically grandiose claims following his June 8 conversation with Trump, declaring that “a new era between Turkey and the US may start after our phone call” but then obscurely responding that they had simply agreed on “some issues” when asked about the substance of their call.

Though US policy on resolving the Libya situation is yet to publicly take shape, analysts can be sure that Washington, not to mention France, Greece and other European countries on the other side of the Mediterranean, would be loathe to see strong Turkish-Russian collaboration in deciding how the chips are going to fall.

Interestingly, following his phone discussion with Trump, Erdogan made more comments indicating Turkey might be interested in coming to a deal brokered with Aguila Saleh, head of the Tobruk-based House of Representatives, as long as Haftar is sidelined. He also touched on Ankara’s interest in Libya’s energy resources, saying: “The most vital areas have been retaken … and the advance continues. Haftar has become crazed as these areas come under Sarraj’s control. The developments indicate to me that Haftar could be tossed out of the process at any time.”

Haftar derives “all of his power” from Russia but was now on the retreat, Erdogan also said, adding that Turkey sees the capture of areas with natural gas and oil deposits as crucial and “and this upsets Russia”.

Whether the United Nations Support Mission in Libya (UNSMIL) will get the backing from the big powers to exert enough authority in its attempt to arrange meaningful talks between the GNA and LNA is another known unknown amid the morass.

Meanwhile, Turkey continues with its efforts to try and win some game-changing backing from the US and Nato, with top Turkish diplomat Cavusoglu referring to the killing of the US ambassador in Benghazi 2012 in telling NTV television in a June 11 interview: “The US is not very active in Libya probably because of traumatic incidents. Both Nato and the US should play a more active role in Libya for the stability [of the country and the region].”