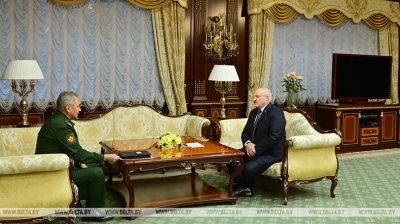 Shortly after Belarusian strongman Alexander Lukashenko and Russian President Vladimir Putin’s phone call on Friday, Russian Defence Minister Sergey Shoigu visited Lukashenko in Minsk on December 3. The meeting sparked new fears among Western analysts and news outlets that Lukashenko is being heavily leaned on by Putin to join the war.

Two key takeaways from their meeting were: 1. Lukashenko for the first time made a public statement which indicates that Belarus is training Russian soldiers on Belarusian territory; 2. right after landing, Shoigu signed amendments on the security and defence part of the Russian-Belarusian Union State treaty.

Denisenko said that the meeting had two aims. On the one hand, the meeting aims to put psychological pressure on Ukraine by raising anxiety throughout Ukrainian society. On the other hand, it’s a way to push Belarus to action. While Yusov said the GUR believes that Russia is putting pressure Belarus to join the war, he added that there are currently no signs of a Belarusian invasion of Ukraine in the near future.

According to Denisenko, Shoigu and Lukashenko could also have been discussing increased weapon transfers from Belarus. Since June, Belarus has been a major supplier of tanks, weapons and ammunition to Russia.

A commander from Ukraine’s Armed Forces has also emphasised that there are currently no signs of Belarus and Russia getting ready for another invasion attempt from Belarusian territory. According to the commander, “To date, the situation in the Northern Operational Zone is controlled. But the accumulation of the allied group of troops continues on the territory of Belarus. Therefore we are constantly monitoring this situation and preparing our forces for an adequate response. There is no threat from Belarus yet.”

A similar statement was made by the spokesman of the Ukrainian MOD’s Defence Intelligence section on Thursday. The MOD expects an intensification in combat training in Belarus, since the new year will bring new rounds of exercises for Belarusian troops. However, the MOD said it saw “no signs of any powerful strike group being set up on the territory of Belarus.”

Throughout this year there have been numerous scares of Belarus joining the war directly by sending in troops to Ukraine. Belarus has performed several military exercises on its own since February 24, welcomed thousands of Russian recruits and increasingly facilitated Russian missile strikes on Ukraine from its territory. In all of these cases, Western and Ukrainian intelligence services and analysts have been worried that Belarus might be preparing for a new offensive on Ukraine’s northern border together with Russia.

Belarus is adding to the problem by constantly publishing conflicting statements, threatening Ukraine with war (and even nuclear war) in some cases, and in other cases assuring everyone that Belarus will never attack Ukraine.

On November 25, the Ukrainian MOD’s Defence Intelligence section issued a public warning that Russia and Belarus are conducting a psychological operation against Ukraine. According to the MOD, this was being done specifically via anonymous accounts posting pictures and messages detailing how an invasion from Belarus would soon come about, preceded by an intense missile attack.

In late November, there was a divergence among Ukraine and its allies’ assessments of the Belarusian threat.

On November 22, Ukrainian Presidential Advisor Aleksey Arestovych claimed that Russia was seriously considering the possibility of an invasion from Belarus. However, he was quickly contradicted by Ukrainian military expert Oleg Zhdanov, and other more recent statements from Ukrainian officials do not back up his case.

Although a renewed invasion attempt may not be imminent, Belarus still poses a military and general security threat in the short, medium and long term, both to its Nato neighbours and to Ukraine itself. Moreover, Lukashenko has had to give up a lot to Putin this year; while the Belarusian economy has become nearly inseparable to Russia’s, Lukashenko has also forfeited Belarus’ defence and security policies to the Kremlin.

However, as many analysts have previously noted, Lukashenko does not plan to give up control of his army. This is due to the fact that without the army Lukashenko may not be able to stay in power.

Belarus has closely monitored the negative response among Russians to Putin’s mobilisation decree. In the last couple of months, more and more Belarusian men have been called to their local enlistment offices. According to the GUR, Belarus’ security service KGB has been conducting a covert “soft mobilisation” in order to check the population's responsiveness to a possible general mobilisation order.

While there’s been no mass exodus of Belarusians, people are nevertheless leaving the country every day to escape political repression. Moreover, there have been reports of Belarusians not showing up to their enlistment offices and anti-war sentiments are still high throughout the Belarusian military and general population.

Ukraine’s General Staff has previously assessed that Belarus has maybe 15,000 troops who would be willing to go to war against Ukraine because of the high monetary reward; not exactly the necessary amount for a new strike force planning to retake fortified Ukrainian positions. Furthermore, the Ukrainian General Staff's report from November 27 concluded that Russia is preparing to transfer some of its troops currently stationed in Belarus to Ukraine's eastern front.

Zelenskiy has claimed that he sees no desire among Belarusians to go to war against Ukraine, a desire which has also likely been noted by Lukashenko and Putin.

Putin already has Lukashenko right where he wants him, and although he might want Belarus’ help in the war, he’s likely afraid of creating further political instability in the country. More likely than a renewed invasion plan, Shoigu and Lukashenko likely discussed further economic and political integration, as well as further material support from Belarus for Russia’s war effort.

Since Russia began its invasion, Belarus has supplied Russia with everything from ammunition and uniforms to various forms of military hardware. In October alone, Russia received 98 T-72A battle tanks from Belarus. Furthermore, some reports have even claimed that agricultural machine manufacturer Gomselmash might use some of its loans given by Russia to repair Russian military equipment.

So far, there are no signs that Lukashenko is disobeying the Kremlin. Still, the Belarusian economy’s slow remodification towards becoming an industrial powerhouse mainly aimed at supplying products and machinery for the Russian war effort is not close to an optimal development for Lukashenko.

No one knows what may happen in the beginning of 2023. Putin has not given up the idea of another push towards Kyiv, and the easiest way for that is through Belarus. Although weakened by the recent death of his close confidant Foreign Minister Vladimir Makei, Lukashenko seems to be holding out for now.

Ukraine anti-corruption officers raid home of Kolomoisky
RBI's 2022 profits soar to €3.6bn, with Russian operations representing more than half
bneGREEN: Most growth in power generation by 2050 will be solar and wind – BP