Istanbul, Ankara mayors not at risk of being replaced says interior minister

Fears that Turkey’s Erdogan administration could move to replace the opposition mayors of Istanbul and Ankara with state-appointed trustees have eased following comments made by Interior Minister Suleyman Soylu on September 8.

Soylu last week threatened “to devastate” Istanbul Mayor Ekrem Imamoglu, of the main opposition Republican People’s Party (CHP), in response to his support for the ousted pro-Kurdish mayors of the cities of Diyarbakir, Van and Mardin. They were lately replaced with government appointees after officials cited allegations of connections between the Peoples’ Democratic Party (HDP) and Kurdish terrorists. It was partly thanks to HDP support that CHP candidates including Imamoglu were able to inflict stinging defeats on candidates backed by President Recep Tayyip Erdogan and his ruling Justice and Development Party (AKP) at the end of March and there have been mounting fears that they would similarly be removed from elected office on the basis of alleged official national security concerns .

But in a CNN Turk interview, Soylu said: “For Istanbul and Ankara, for such a thing to be in question [appointment of trustees as replacement mayors] is not possible.”

Ankara’s CHP mayor, Mansur Yavas, has joined Imamoglu in hitting out at the action taken against the three Kurdish mayors. Yavas’ poll victory was also an embarrassment for Erdogan but it is particularly Imamoglu—who went on to score a victory by a massive margin in an Istanbul revote in June, after his initial victory was cancelled by election watchdog officials after claims of polling station irregularities were raised by the president and his backers—who is deemed potential future presidential material and the biggest threat to Erdogan adding many more years to his near 17 years as Turkey’s leader.

Imamoglu labelled the move made against the Kurdish mayors illegal and undemocratic and called for it to be reversed. He visited two of the ousted mayors in Diyarbakir last month.

“It shouldn’t become a tradition in this country to blame someone without any judgment. It is against jurisdiction and law,” Imamoglu said.

“All of the 82 million people in Turkey are my citizens... What I did was in line with the law and for propagating the national sentiment to all around the country,” he said of his visit to Diyarbakir, according to Reuters.

Imamoglu exhibits ‘AKP’ cars
Imamoglu spoke at a press conference called to explain why Istanbul’s Metropolitan Municipality had collected and parked on the city’s Yenikapi Square hundreds of cars hired for official use by the previous AKP administration that ran the local authority. The exhibiting of the vehicles, said the mayor, demonstrated a huge squandering of public money. 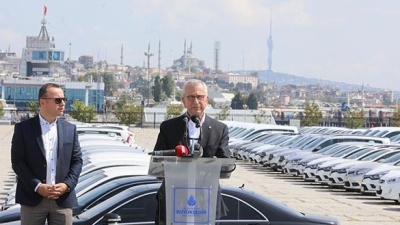 Officials discuss with the media the hundreds of cars rounded up and parked on Yenikapi Square. (Picture credit: Istanbul Metrop. Munic.).

Before taking office, Imamoglu outlined in a June 3 tweet that the municipality had paid Turkish lira (TRY) 120mn for vehicles it didn’t need. He didn’t give details but appeared to imply that many cars were given to AKP members for private use.

“So this is how they squandered away our money,” Huseyin Kacar, a 68-year-old pensioner, was quoted as saying by Bloomberg as he observed the collection. “I’ve been trying to get by with 2,000 liras ($350) a month.”

The AKP, which together with predecessor parties held the Istanbul mayorship for around a quarter of a century prior to the Imamoglu victory, rejected the claim that the car rentals amounted to waste. “All of these are service vehicles used in the field,” Sabah newspaper cited Tevfik Goksu, a senior municipal official from the ruling party, as saying. Goksu accused Imamoglu of engaging in “black propaganda.”

Erdogan, who rose to prominence in national politics as a mayor of Istanbul, held rallies on the 670,000-square-metre Yenikapi Square during the Istanbul election and election rerun.

Opposition city chief jailed for insulting president
In another fight between the CHP and AKP over Istanbul politics, the CHP’s Istanbul chairwoman was last week sentenced to nearly 10 years in prison for insulting the president and spreading “terror propaganda”. Canan Kaftancioglu, 47, was convicted mainly over tweets which date back several years. She has said the charges were politically motivated and remains free pending an appeal.

Imamoglu told reporters that he believed the court ruling would be reversed higher courts.

Saying that he was saddened by the decision, he said: "There is no justice in this country. In Turkey, instead of listening to their conscience, judges look towards the palace [the President's office]."

He added that Kaftancioglu was sentenced "because of her success in Istanbul elections".