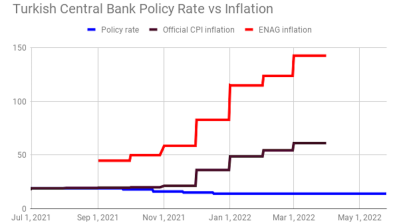 We bring you no surprises. Turkey’s monetary policy committee (MPC) at its latest meeting on April 14 decided to hold its policy rate at 14%, the central bank announced. The decision was trotted out in line with market expectations.

On April 4, Turkey’s national statistical institute (TUIK, or TurkStat) said that the country’s official consumer price index (CPI) inflation was recorded at 61% y/y in March. The real benchmark interest rate is thus minus 47%. Inflation has got a gallop on. In fact, reputable academics contend it actually sits, ugly grin and all, at 143%. The Turkish consumer knows full well what they encounter in the shops and markets.

Brent oil and commodity prices, in general, have lately been stabilising, with the wavelengths in the fluctuations becoming smaller. But stabilisation is occurring at significantly higher prices. The FAO food price index extended its record in March at 159, up 34% y/y.

Turkey’s Erdogan regime has been aiming to keep the USD/TRY pair below the 15-level since March 4. It is unknown how much is flowing into the central bank’s account from the lira deposit protection scheme and exporters, while the reserves are declining.

In April, a limited recovery will be observed in Turkey’s trade deficit as gas bills will decline and the tourism season will begin.

Turkey’s 5-year credit default swaps (CDS) are hovering in the 500s while the yield on the Turkish government’s 10-year eurobonds is in the 8%s.

On May 26, the MPC is scheduled to hold its next rates meeting. Currently, the market expectation is that it will again hold the benchmark rate in line with the administration’s ‘Erdoganomic’ so-called “new economic model” in which officials do not respond to rampant inflation with monetary tightening and attempt to fuel exports to curb the current account deficit. Down this path, we are led to believe, lies economic freedom. Turks can dream of thumbing their noses at the futile machinations of global economic vultures. There’s still that one niggling problem—nothing adds up in Erdoganomics.

On May 5, the inflation figures for April will be released.

In March, net lira creation via loans went beyond the pale again with TRY208bn ($14bn), setting a new all-time high and leaving the TRY141bn seen in April 2020 trailing in its wake.

The regime is pumping in lira via commercial loans. In 2017, it first boosted commercial loans via the credit guarantee fund (KGF). Since 2018, following the lira crash of that year, it has been gradually introducing capital controls.

Despite the eased monetary conditions, economic activity has not responded positively. And Turkey's big export market Europe has endured its own slowdown since the beginning of 2022.

Ukraine was still resisting Russia's invasion as of April 14, with parts of the country turned into a slaughterhouse. See the live map here.

Since the Russian invasion of Ukraine launched on February 24, almost passed two months have passed. Much of the media has lost interest in keeping the conflict in sharp focus. The worry is that Ukraine will become the new Syria, a country that has been a battlefield since 2011.

So far, the overall impact of the war on the fortunes of the Erdogan administration is not yet clear. There are just about as many positives as negatives. Turks have been hit by booming commodity prices. The Russians are carrying their wealth to Turkey to avoid sanctions. Some companies in Turkey are buying cheap, discounted oil from Russia.

On the global markets, the USD index (DXY) surpassed the 100-level, while the yield on 10-year US Treasury papers surpassed the 2.80-level. The US yield curve returned to normal.

On April 14, the European Central Bank (ECB) kept rates on hold and its governor Christine Lagarde once more talked the talk. The EUR/USD tested below the 1.08-level.

Lagarde is a lawyer. It was only when she was appointed ECB governor in 2019 that she got a grip on what happens inside a central bank building.

Inflation in the Euro Area extended its record to 7.5% y/y in March. Producer price inflation reached 31.4% in February.

On May 4, the Fed’s open market committee will announce the results of its next meeting. A rate hike is certain. Whether it will be 25bp or 50bp is awaited.

The guidance for its balance sheet reduction is also expected.

On March 16, after the last Fed meeting was held, governor Jerome Powell, another lawyer, said that balance sheet reduction may begin from the next meeting.

May, August and November this year could bring blood red markets due to the Fed tightening.

Annual CPI inflation in the US rose to 8.5% in March. Expectations currently suggest that US inflation will peak in the 8%s in April and will decline in May.

The world awaits two lawyers, who were confident that inflation was transitory. They need to explain how or whether they are planning to reverse inflation trends without a recession.

If the lawyers had at least cut asset purchases when inflation first reared its ugly head last year, a smoother transition could be possible at the expense of some losses in financial markets.

The current direction in inflation and imprudent policy responses suggest that the number of op-eds on the rising populist right in the West will increase in the coming period.

In Turkey, the Supreme Election Board (YSK) has announced that all of the country’s election boards will be renewed by July 6 in line with recent amendments made to the election law.

This route means going for a harder dictatorship, just like Alexander Lukashenko in Belarus.

At the moment, the West is openly supporting Erdogan again. The masses are intimidated by the war. The policymakers are not in need of hidden games. If some sluggard such as Turkey’s main opposition leader Kemal Kilicdaroglu or the candidate he endorsed in the 2018 presidential poll, Muharrem Ince, turns out to be his rival for the presidency, Erdogan can manage reactions at home too.

For Erdogan, his most serious rival is his health. Unless an ambitious and popular possible candidate such as Istanbul mayor Ekrem Imamoglu—who nailed Istanbul in the 2019 local elections to Erdogan’s chagrin—is nominated to stand against them. Then we might wave a good-bye to Erdogan, who could try his luck fleeing somewhere abroad prior to landing in jail.

Turkey remains exposed to turbulent times in the period ahead.

The birth of a Kazakh banking empire: ATF Bank
Moody’s downgrades Turkey to six notches below investment grade
Home of the humbled lira, Turkey’s the biggest cryptocurrency market in the Middle East