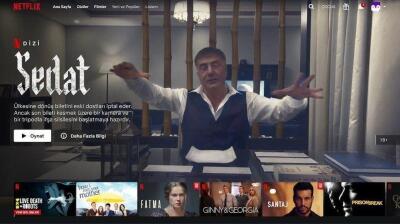 Beware an ageing mobster with a camera and a tripod and a taste for the limelight.
By Akin Nazli May 22, 2021

Previously on “Sedat”, The Botox Chief: Our May 14 curtain-raiser told how millions in Turkey have become enthralled by YouTube videos released by Sedat Peker, a mafia boss known as The Botox Chief or The Botox, alleging corruption among top officials.

Since May 2, The Botox has released a total of six videos, while a seventh is due on May 23 at 07:30 Istanbul time. The overall viewer count for the first six videos stands at more than 30mn. The Botox, a 49-year-old gangland figure who has served time, does not ask for any copyright and the YouTube stats do not include redistributors, commentary videos with clips, excerpts on TV programmes and so on.

The impact of the The Botox remains phenomenal. Just about all Turks are talking about him. He says he has about 10 videos that he intends to release in total. He definitely receives professional help in the production of the videos and in public relations via social media. He uses Twitter (@sedat_peker).

After first aiming his commentary at the ‘state within a state’ Pelicans group and police chief-turned-politician-turned-convicted criminal Mehmet Agar, The Botox in his last few videos switched his attacks to Interior Minister Suleyman Soylu.

The Pelicans had kept a studied silence, while Agar, with some "professional" footwork, turned the focus to Soylu, the incumbent in charge of public order. Soylu was in no position to stay quiet.

There’s a feeling that The Botox has totally debunked Soylu, who got Peker's hackles up by calling him "dirty mafia" and has reacted with a criminal complaint. But, unless Soylu can prove otherwise, that complaint will be seen by many as nothing more than a “troll”. As of May 21, there is no legal probe into the case and we’ll leave it to the mainstream monkeys to relay any credible updates on this matter from the Turkish judiciary.

The Botox, thought to be broadcasting from an abode in Dubai, responded to Soylu’s call for him to submit himself to justice by saying: “He [Soylu] says ‘don’t run away like a rat, come and throw yourself before justice… Hey Clean Sulu [Soylu], Fancy Sulu… surrender to the prosecutor and the judge whose appointments you arranged, right? I shall come along to the interior ministry headed by you, right? Clean Sulu.”

It’s not only Soylu who walks all over anyone he targets, The Botox does that too. He bulldozes them to the ground. The reason is simple. The Botox had business with all of them, he helped them rise…

He claims that he invested in Soylu for 20 years and offers up evidence for his claims. The Botox is no fool. He knows his Don Vito Corleone history very well and literature that he can make effective use of.

A photo released by The Botox (below) shows his ex-right-hand-man and Soylu celebrating Soylu’s victory in elections held back in 2008 for the leadership of the Democrat Party.

While releasing on Twitter two videos (below) to reveal his video call with a “journalist” who was carrying messages between him and Soylu, The Botox issued an open threat: “I warn everyone whose names have been mentioned in my remarks. Do not deny me, I will mortify everyone. We will take it on the nose as real men. Or, I will bring [you] crashing down!”

The Botox refers to Turkish President Recep Tayyip Erdogan in his videos as “Tayyip Abi”. “Abi” means older brother. Although he has talked about the Pelicans, he has also not trampled on Erdogan’s son-in-law, Berat Albayrak, known as the head of the shadowy group.

It is not known whether the Erdogan family is happy or worried about the apparent respect shown to them by Peker, a regular face at high society events in Turkey in the past two decades. The scandal unleashed by the videos has engrossed the country for a month so far, but the “almighty” president has hardly breathed a single word about it. Albayrak has been lost to view since November 8, when he quit as finance minister amid a growing outcry over what his critics saw as his disastrous handling of Turkey’s FX reserves.

June 13, 2015, hardcore times in the Syria War (The Syria War is anything but “civil” as the international press corps insistently call it): The Botox is seen (left) chatting with Erdogan (middle). The other person is Bulent Yildirim (right), head of the Humanitarian Relief Foundation (IHH). The IHH provided jihadists in Syria with “humanitarian aid”. The trio are pictured at the wedding of Taha Un, then head of the Justice and Development Party’s (AKP) troll army.

As for the crimes being revealed by The Botox, well, the list is too long. But a quick taste might include:

- Guns sent to Syria: The Botox has been reiterating that he will talk about guns sent to Syria. It seems he is using this as some kind of blackmail and hoping for some deals.

Peker has alleged that Mehmet Agar was the intended recipient of this shipment.

Narco-traffic headed to Turkey is right now in the spotlight. As we noted on May 14, Turkey is a major heroin route while there are claims that the country is rising in importance both as a drug consumer and as a cocaine route.

- Yeldana Kaharman: In 2019, a 21-year-old Kazakh student and journalist was found dead in her home. Local authorities quickly closed the case, saying she committed suicide. It is an open secret in Turkey that Agar and his son Tolga Agar, an AKP MP, are thought to have played some kind of role in the fast closure of the file.

The Botox has re-opened Pandora’s box when it comes to the Kaharman case.

On May 14, we observed that all the crimes mentioned in the videos are actually already well-known to the public, but The Botox is recirculating them while providing open confessions along with some hitherto unknown details.

Audiences everywhere will be hoping that everything so far amounts to no more than a teaser for a big ending.