ISTANBUL BLOG: Erdogan goes for economic machismo and warns of “mischief makers” as rumours of a challenger are firmed up 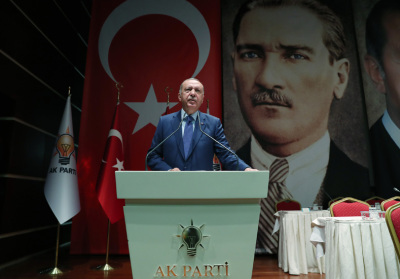 It might be said that Turkey’s strongman president, Recep Tayyip Erdogan, this week commenced his “I’m going nowhere” campaign as word continued to spread that he could face the emergence of a significant challenger before the year is out.

The country’s authoritarian leader of approaching 17 years came out with strident statements on how he would next year lead economically ailed Turkey to a fast recovery while at the same time warning his ruling AKP party against “mischief makers” in their ranks.

The week also saw a person said to be close to Turkey’s former economy czar Ali Babacan brief Bloomberg that Erdogan’s former ally was set to create his own political party, which would include several former ministers and prominent economists who would work with him on formulating policies. 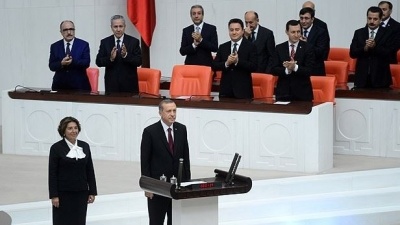 Babacan is seen second from right in the first row behind Erdogan at the swearing-in of Turkey's 12th president in 2014. (Picture credit: VoA).

To win back the millions of voters he has lost since the country’s economic misery was triggered by last year’s lira crisis, Erdogan clearly has to convince ordinary Turks that he has the economic competence to soon get the good times rolling again. But the number of those who say Erdogan botched the economy—with Turkey’s economy crashing largely because it was overheated to unsustainable levels with dollops of unwise cheap credit—is by no means modest. Thus Erdogan has embarked on a twin strategy of turning on the credit pumps to deliver cheaper money to secure yet another short-term growth bubble, and pulling out all the usual populist bluff and bluster from his locker.

Turkey’s going for 5% growth—because Erdogan says so
Details be damned, but Erdogan has brashly announced that he is planning for Turkish economic growth of 5% in 2020.

"I am giving a growth level for 2020, we will focus on that. We will definitely plan a growth rate of 5%," Erdogan said in a speech.

No doubt keenly aware of the plans of Babacan—deputy PM responsible for the economy from 2009 to 2015—and the huge threat that could eventually come from the very popular Ekrem Imamoglu—the opposition politician who handed 65-yer-old Erdogan the most humiliating defeats of his political career by winning the Istanbul vote and ‘revote’ earlier this year—Erdogan put his supporters on alert on September 5 with a speech in Sivas, central Anatolia. “If we keep our brotherhood strong, then seeds of unrest can’t grow,” he said, adding: “Those who wanted to harm the AKP for their own political ambitions and aspirations have always been disappointed.” 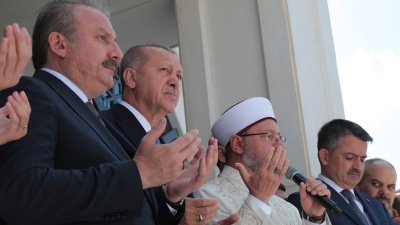 Plenty on his mind... Erdogan (second from left) at the inauguration of ITU Abdulhakim Sancak Mosque in Istanbul of September 6. (Picture credit: Turkish Presidency).

Erdogan, meanwhile, is in the process of expelling former AKP chairman and PM Ahmet Davutoglu, who has spoken out against his policies, from the AKP. And there are fears that if he can kick up enough distractions and keep international difficulties at bay, he could go all out to crush any would-be challengers. Officials, for instance, have been giving indications that they could seize the Istanbul municipality, no doubt by throwing allegations of terrorism connections that pose a threat to national security.

Babacan, 52, broke with the AKP days after Erdogan fired the central bank governor in July. Known for presiding over the boom times that tripled the size of Turkey’s economy following the country’s 2001 financial crisis, he could conceivably link up with Davutoglu in forming the ‘ Babacan Party’ but is reportedly so far cool on the idea.

Economic hole
One thing is clear, Turkey remains in an economic hole and even producing a short-term feel-good phase—which Erdogan could draw on in a snap elections strategy designed to consolidate his power before his opponents have a chance to demonstrate the long-term structural economic immiseration and build up a head of steam—is a tall order.

The depth of the hole was demonstrated on September 5 with a report from Bloomberg that Turkey wants its banks to write off billions of dollars of loans to some energy projects as part of a larger plan to clear lenders’ books as part of an effort aimed at boosting credit.

Banking regulator BDDK has reportedly taken the position that credit extended to at least three gas-fired power plants should be classified as non-performing loans (NPLs), according to people with knowledge of the matter cited by the news agency.

The three are said to be ACWA’s $1bn plant in Kirikkale, Gama’s $900mn project near Ankara and a $1bn facility run by Ansaldo Energia and its partners in Gebze.

Turkiye Garanti Bankasi, Turkiye Is Bankasi, Akbank, European Bank for Reconstruction and Development (EBRD), Denizbank  and Yapi Kredi Bankasi are among the banks that lent to those projects, according to data compiled by Bloomberg. The total original loans on these projects were nearly $1.9bn.

Many banks have apparently privately told policy makers that they aren’t keen on being forced to reclassify massive amounts of debt as NPLs so quickly.

Turkish companies have borrowed around $60bn since 2003 to finance investments into new power generation and distribution, according to a Boston Consulting Group report. Since the collapse of the lira in the currency crisis of last summer, some utilities aren’t earning anywhere near enough to repay foreign-currency loans.

About two-thirds of the loans taken out by the energy industry are yet to be repaid, according to Ebru Dildar Edin, a deputy chief executive officer at Garanti. As much as $13bn needs to be restructured with gas plants making up a bulk of it, she said earlier this year.

Such is the sea of red ink in Turkey, the populist strategies of pretending it’s not there, or is entirely under control, are starting to wear very thin.