ISTANBUL BLOG: Erdogan pulls off coup inside the central bank 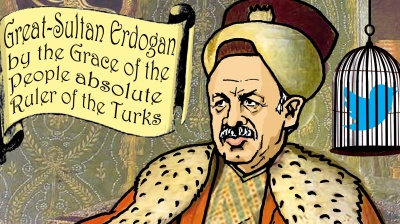 Analysts can continue with their polite debates as to how much independence the central bank retains. Ordinary Turks know the answer to that one.
By Akin Nazli in Belgrade August 10, 2019

Donald Trump, eat your heart out. Strongman pal Recep Tayyip Erdogan is the master of the populist purge. Not only has the Turkish president managed to rid himself of a central bank governor who “wouldn’t follow orders” to give Turkey the cheap money Erdogan insists it needs (unlike the constitutionally constrained Trump who week after week can only rail at US Federal Reserve chairman Jerome Booth in vain for his refusal to bring in ballsy rate cuts), he’s now managed to turf out the regulator’s chief economist, along with its heads of banking and finance, markets, monetary policy and institutional risk and research.

The mass firing was reportedly ordered by the central bank’s assembly, but make no mistake, no such major upheaval happens in Turkey without executive president Erdogan’s say so. And need it be said again? Nowadays, if Erdogan wants a rate cut, despite urgings for more caution from the technocrats, he gets one. It’s a reality, yet it’s a reality that global finance analysts intriguingly get, and then days later, seemingly don’t get.

Instructive
The evolving reaction to the dismissal of chief economist Hakan Kara will no doubt be instructive. Firstly, these analysts tweet their dismay at such moves, then, as the news cycle moves on, they continue treating Turkey as if it is still something of a normal democracy with a properly functioning market economy.

Almost certainly, the trashing of the monetary independence of the central bank will become just another thing foreign investors can swallow when it comes to doing business in and with Turkey, but, as Turkish economist Ugur Gurses related to Deutsche Welle, many of those who were sacked had been at the central bank for decades and their dismissal was "not wise at all". "[This is] an attempt to uproot the central bank system," concluded Gurses.

Most Turks, meanwhile, will shrug. For Erdogan has already uprooted almost every institution in the land, including the TUIK statistical agency which continues to turn out rather questionable inflation and other data.

It’s time the mainstream analysts and media started giving it to us straight. In the world of economics, the Erdogan administration is running something close to a banana republic with an economy riddled by state capitalism. And in the worlds of human rights and media freedom, the truth is even more brutal, so don’t look for any real pushback there. Erdogan will have a free hand until enough of those still with a shot at changing the power structure pluck up the courage and dignity to say “No more”.

No-one left “to say what is right”
Once upon a time, the Turkish central bank was known for producing some of the most qualified economists in the country, but now, as Refet Gurkaynak, a professor of economics at Ankara’s Bilkent university, said in a tweet, we have an institution where the officials’ removal will “not only result in even more erroneous monetary policy but will leave no-one to say what is right”.

In fact, with Erdogan in charge of interest rates in Turkey, one might say the existence of the Turkish central bank is a misallocation of the country’s scarce resources.

For now, the king of the purge is getting the results he wants. Despite Turkey’s recent 425-bp interest rate cut—the largest in at least 17 years—the Turkish lira was last month the best performing of the world’s most-traded currencies against the dollar, gaining 4.8%, according to Bloomberg.

Cautious easing by the Fed helped, as did Trump’s aversion to imposing meaningful sanctions on populist buddy Erdogan for buying Russian missile systems deemed a security threat to Nato military hardware by the Pentagon, but also in the mix are currency distortions achieved by the Turkish president’s minions.

August 7, meanwhile, brought a tweet from Steve Hanke, the applied economist at Johns Hopkins University known for his deep scepticism over the way many emerging economies calculate their inflation rates: “Raising #Turkey’s FX reserve requirements & withdrawing another $2.1b worth of liquidity from the market are bandaids. They won’t save the half-baked #lira. @RTErdogan’s misguided economic policies do nothing to address the underlying weakness of the lira.”

Alas, until somebody addresses the underlying weakness of Turkey’s claim to run market economy institutions, for tens of millions of ordinary Turks sidelined by Erdogan’s polarising power games and a real economy wracked by recession, Turkey will remain an unpitying economic basket case.