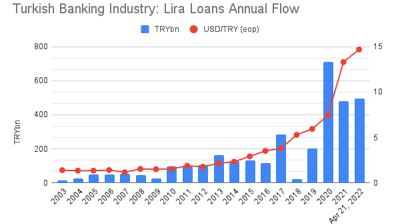 The Turkish central bank has introduced a reserve requirement on Turkish lira (TRY)-denominated commercial loans, the authority said in a statement on April 23.

With this new regulation, reserve requirements, which used to only be applied to the liability side of balance sheets, will also be applied to the asset side, the regulator noted, in an apparent bid to explain its uncommon move.

• Commercial lira loans, which have been extended in four-week periods since April 1, are subject to a reserve requirement of 10% applied during the maintenance periods of the four weeks.

• For banks with a loan growth rate standing above 20% as of May 31 compared to end-2021, the difference between their outstanding loan balances as of March 31 and end-2021 will be subject to a reserve requirement of 20% of this difference for a period of six months.

• Loans to government-run companies and their subsidiaries

Banks that manage to convert more than 10% of FX-linked deposits need keep no additional reserve at the central bank.

The Erdogan regime, say critics, treats Turkey like an economic guinea pig. It is currently pumping in lira via commercial loans.

In 2017, it first boosted commercial loans via the credit guarantee fund (KGF).

Since 2018, following the lira crash of that year, it has been gradually introducing capital controls.

Now, the regime looks set to discover that commercial loans plus soft (but getting harder) capital controls will also end up in a currency crash.

In March, net lira creation via loans went beyond the pale again, at TRY208bn ($14bn), setting a new all-time high and leaving the TRY141bn seen in April 2020 far behind.

It seems that the regime has fathomed that they do not have enough FX reserves to keep the lira under control amid such a fast growth in lira supply. However, they remain locked to their course as companies, beginning with SMEs, will bankrupt when they cut the loan flow.

So, President Recep Tayyip Erdogan's officials are once again pushing all the buttons at the same time, attempting to avoid, but fuelling chaos. The administration is introducing a reserve requirement on loans (with exemptions taken into account; the central bank does not want companies to fuel their commodity stocks with cheap loans) whie simultaneously announcing new loan packages.

The finance pundits, meanwhile, have gotten tired. They do not even try to assign some meaning to what the Erdogan regime is up to. There is not even any discussion anymore. The news flows and no one comments.

On April 15, Erdogan announced a new TRY150bn loan package to be extended for tourism and export-oriented investments at a 9% cost.

There is currently a belief in the regime that if they extend cheap loans for investments everything in the Turkish economy will turn out great.

The regime tends to believe in different superstitions at different times. The commonality is that it pumps in lira loans and the lira crashes.

Rather than dealing with banking regulations, the palace administration directly sends lists to banks to tell them who will receive how much loans and at what maturity and cost.

The result will not and cannot change. If the amount of lira increases, the currency will crash again.

The regime is, meanwhile, introducing additional capital controls to prevent companies from buying FX or importing goods with loans.

Capital controls are not enough. On April 20, Erdogan offered a 4% deposit rate to foreigners who deposit their FX at the central bank. (The instrument in use is called YUVAM, different from the FX-protected lira deposits scheme that is called KKM.)

The Turkish lira is among the most stable currencies in the world in 2022 so far (see the central bank's reserve position below). Global markets are focused on the new phase of the Fed tightening that will arrive in May, which will couple with the traditional "sell in May, go holiday" sell-offs in the month. All the world's central banks, except for Turkey's, are hiking their policy rates to get ready for this phase. The Turkish central bank, which cannot use its policy rate instrument given the Erdogan leash around its neck, is instead trying to introduce some "macroprudential measures" and non-capital controls as listed above.

It should also be noted that after Erdogan announces some loan and deposit packages, no official statements follow. So, how these packages are implemented is unknown.

In a normal country, it would be scandalous enough for the president to try to market a deposit instrument to foreigners through the central bank. (Central banks are not deposit banks for a start.)

However, when it comes to Turkey, this is a concern that passes with hardly any comment. For Turkey's economic story under Erdogan includes dozens scandals of far greater magnitude.

At the end of the day, or two decades when we think of how long Erdogan has been at the controls, Turks find themselves discussing whether coupons for discounted bread, as distributed by the Gaziantep municipality, can be described as ration cards.

The opposition claims that they are indeed ration cards, while the regime says that citizens can buy as much bread as they want and that these cards are just for available discounts.

Certain quotas on how many products can be bought would be required for those cards to be termed ration cards, according to the ruling party officials.

This is important for us since we argued in January that, with the widespread electricity cuts then in effect, the current situation in Turkey outdid the wretchedness that was seen during the balance of payments crisis that the country suffered at the end of the 1970s.

The next stop in looking back for negative milestones is the first half of the 1940s during World War II, when bread in Turkey was unmistakably rationed.

It is controversial. But if the consensus is that Gaziantep's cards are ration cards, then the next stop going back is World War I.

In World War I, Turkey was invaded, the Ottoman State collapsed, there was mass murder of people, and so on. It is said that people distilled grains from cattle’s faecal matter due to the famine.