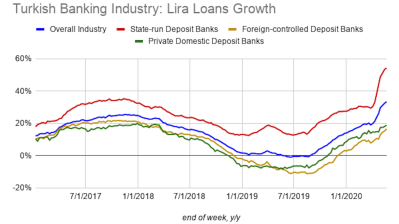 Turkey’s BDDK banking watchdog has amended the asset ratio calculation methodology for the country’s banks that it introduced in April. Its move appears to have been made because the Turkish banking industry played the initial regulation like a fiddle, foiling the regulators. The new ratio takes effect from June 1.

The banking industry in Turkey has had decades of ‘commando training’ in dealing with incompetent politicians, incoherent and incontinent economic policy making, hyperinflation, neverending crises, economic shocks and so forth. But the current administration—the new-style, ultra-assertive executive presidency led by Recep Tayyip Erdogan—is stubbornly determined to tame private sector bankers into entirely toeing the line.

The orders sent out actually boil down to something rather simple: the lenders are to hand over their FX to the central bank in swaps or to the Treasury in return for government paper, while extending loans to the Turks. And, as their FX liquidity is coming to an end, their shareholders must inject more capital into them for the use of the government.

The BDDK has, meanwhile, imposed administrative fines amounting to Turkish lira (TRY) 102mn ($15mn) on 18 banks on the basis of complaints submitted by individual and commercial clients during the onset and fight against the coronavirus (COVID-19) outbreak. It also stated that examination processes as regards the complaints would continue without interruption.

These may be small sums for Turkish lenders but the message that the fines convey is more important than the actual penalty.

Meanwhile, the state-run trio—Ziraat, Vakifbank and Halkbank—on June 1 unveiled an awaited new loans package, Bloomberg reported. They are offering 15-year mortgages pegged to monthly interest rates as low as 0.64%, or under 8% annually. Annual inflation is running at around 11%.

Similar rates and grace periods of as much as a year are on offer on loans for the purchase of made-in-Turkey cars and home appliances.

The set of loan offers also includes holiday packages and some other products.

The asset ratio amendment arose after some unnamed bank executives complained to Reuters that “years of government pressure to defer dividends and drive Turkey’s stop-start growth have tested the patience of shareholders”.

Well, the bank shareholders may as well reach for pills or psychiatrists when it comes to stress caused by this government because it is not for listening. The regulation with the initial asset ratio was issued after private lenders complained to the TBB banking association—chaired by Ziraat’s general manager, whose bank we may recall is controlled by you-know-who—that they were being publicly treated by the government loyalist media, officials and Erdoganists as whipping boys.

Perhaps the shareholders might alternatively seek consolation in the new political parties established by Erdogan’s former prime minister, Ahmet Davutoglu—who served as the developer and broker of the strongman’s neo-Ottoman policy—and Ali “ baby face” Babacan, Erdogan’s former economy czar and personal negotiator in talks with then US president George W. Bush prior to the 2003 Iraq War. Anyone no longer welcome among the gang is, after all, doing so.

February 14, 2003: President George W. Bush meets with Yasar Yakis, Turkey’s foreign minister, centre, and Ali Babacan, the Turkish economy minister, in the Oval Office. The meeting took place one month before the US attacked Iraq. The attack came without Turkey’s official support after the Turkish parliament rejected a government proposal. However, unofficial support was in place. (Credit: White House photo by Tina Hager).

Davutoglu has a book to his name, Strategic Depth published in 2001, based on his daydreams about some non-existent people who are awaiting neo-Ottoman rule across the geography of the former Ottoman Empire. Two years after it rolled off the press he became foreign policy advisor to then PM Erdogan, prior to the Iraq War.

Cambridge University Press lately published a new book by Davutoglu. Its focus is the world order.

Turkey and the wider region can perhaps just now feel relatively safe from the delvings of Davutoglu as he is currently focused on macro objectives rather than baseless regional dreams and aspirations that if actioned tend to kill thousands of people at a time due to the courage of ignorance. The ex-Erdogan ally’s academic title and his publications backed by globally-recognised academic publishers might prompt anxieties as to the state of Turkey’s education system and the wrong-headed favouritism bestowed on its Davutoglus by academia worldwide. Might the world’s recent embroilments signal that some of its decision-makers are reading Davutoglu’s new book? Heaven forbid.

Islamist Davutoglu is also good at “horse-trading” with Germany’s Christian Democrats led by Chancellor Angela Merkel (the pair are seen meeting below) over the lives of millions of people displaced thanks to his strategic depth. The determinedly religious always have those lofty moral values to turn to and fall back on.

Turkish lenders have long enjoyed beneficial regulation such as the huge expansion of the state’s credit guarantee fund and all the while, since 2003, the government has had its hand in countless crimes against humanity.

It’s not just the wise guy Turk who should be reading up on German pastor Martin Niemoller’s experience with Adolf Hitler:

In Syria alone, at least half a million people have perished amid the civil war and associated strife and at least eight million have been internally displaced, with six million, at a minimum, now refugees. Turkey cannot claim to have made it to the moral high ground during this mounting wretchedness and carnage.

June, 2011: Erdogan’s then foreign minister Davutoglu and then US secretary of state Hillary Clinton. Their encounter at the Libya Contact Group gathering in Abu Dhabi occurred a few months after the unrest in Syria began and a few months before Erdogan burnt the bridges with Syria’s Bashar al-Assad.

Be sure, anyone who partners with Erdogan later pays through the nose.

But the worst thing his Islamists have brought to Turkish society is the erasing of shame. Time and time again, the AKP governments have pursued policies and actions in Syria and Turkey’s Kurdish cities, and now in Libya, that have led to a horrendous number of civilian deaths. Yet there is no shame. The bar to feeling ashamed has been set so high that no-one comes close.

But back to the previously insidious, but now more in-your-face, regulation of the bankers. “Changes to rules and regulations were increasingly introduced using more discretionary instruments. Between 2003 and 2008, most changes were instituted through primary Laws, but after 2009, most changes came through communiques and regulations; the latter accounted for around 90 percent of changes relating to business rules and regulations between 2016 and 2018,” the World Bank said in its latest Turkey Economic Monitor released in October.

We must unfortunately note that there’s no Doing Banking Business sub-category, a great pity because as a result of nonstop regulatory forbearance, the capital adequacy ratios and financial statements of the lenders in Turkey are far from reliable.

Seker Invest contends that the latest amended asset ratio rules should encourage the banks to scale up their lending to real sector companies, extend the overall maturity of their lending books and add more foreign currency lending through their collected FX deposits.

The introduction of an adjustment period for the small-scale banks with total TRY and FX deposits of less than TRY25bn (excluding bank deposits) as of Q1 should bring a competitive edge to these banks until end-2020, Seker adds.

Lastly, banks might be less willing to issue short-term domestic bills as they are now included in the calculation of the denominator of the asset ratio.

The initial ratio was:

The new formula is:

(*) There will be 1.1 coefficient for the calculation of SME, project finance and export loans while loans with less than 3 months maturity will be excluded from the calculation (the lenders had opened short-term accommodation loans to big conglomerates to increase the numerator of the first ratio, and they also ramped up government bond purchases).

Repo transactions with clients and securities issued on the TRY side with less than 6 months maturity will be added to TRY deposits, while repo transactions with clients on the FX side will be added to FX deposits (the lenders had started to offer bills to their deposit clients to reduce the denominator of the initial ratio; Erdogan had also increased the tax on bills to 15% from 10%).

Among private deposit banks, Akbank (AKBNK), Yapi Kredi Bank (YKBNK) and Garanti Bank (GARAN) are in relatively better positions as the shares of their non-retail loans (loans to SMEs, project finance and export loans) in total loans stood at 66%, 64% and 62%, respectively, versus the sector average of 62% as of end-Q1, Seker Invest noted.

Among the state deposit banks, Halkbank (HALKB) stands out with its non-retail loans ratio of 63%, versus Vakifbank's (VAKBN) rather low 46%.

Seker said the state deposit banks should stand out with their asset ratios of far over 100%, thanks to the relatively higher weight of TRY deposits in their deposit bases.

Isbank and Yapi Kredi Bank should not face any major difficulty in meeting the 100% threshold thanks to the relatively higher weights of FX loans in their lending books of 41.5% and 42.2%, respectively, Seker says.

On the other hand, it observes, Akbank looks less favourable with its comparatively lower FX loan weight of 31.3% and higher weight of loans with a maturity of less than 3 months.