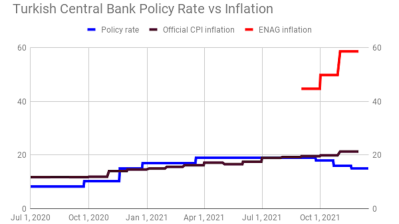 The country’s statistical institute TUIK released the official consumer price inflation report for November. The CPI stood at  21.31%, up from 19.89% in October, said TUIK. That meant Turkey’s inflation rate now sat 6pp above the central bank’s policy rate. Or did it? Moments before TUIK’s December 3 statement, the Inflation Research Group, or ENAG (no timewasters these folk, the research is led by highly respected Istanbul academics), calculated Turkey’s November CPI at 58.65%, up from October’s 50% and September’s 45%.

Main opposition Republican People’s Party (CHP) leader Kemal Kilicdaroglu made his way to TUIK’s HQ to demand an explanation—but he was denied entry.

Fitch Ratings, meanwhile, cut Turkey’s sovereign outlook to Negative. And the central bank burnt another $300mn or so of its reserves attempting to resuscitate the stricken Turkish lira.

TUIK released its idea of core inflation at 17.62%, up from 16.82% in October, and stated that producer price index (PPI) inflation was now 55%, up 9pp m/m. We can’t stress it enough—avoid planning, pricing or drawing inferences when it comes to TUIK’s data. 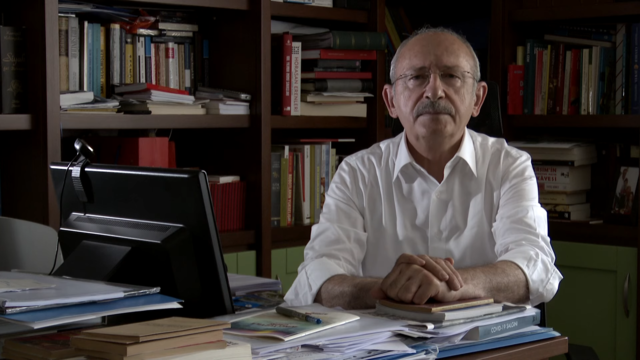 Such is the scale of the economic mismanagement of Turkey’s president, Recep Tayyip Erdogan, there are open goals for the opposition everywhere you look. Kilicdaroglu, the country’s main opposition leader since 2010, comes across as something of a hapless, ineffectual fellow. The sight of him failing to gain entry to TUIK somehow seemed preordained.

Last month, someone told Kilicdaroglu that there is a state institution known as the central bank. He managed to get into the building. He had coffee with the governor and left. Little was heard of what came to pass, if anything much.

The sight of Kilicdaroglu trying to get to grips with the wily Erdogan can cause severe depression, or worse. Thirty million Turks are going hungry.

Kilicdaroglu is supposed to give Erdogan notice to quit the presidential palace? It’s hard to imagine. Images of him being turned away from the back entrance seem more apt.

And what of the shameless Erdogan who has led his country to rack and ruin? He says the opposition simply waited for Turkey to collapse and now they hope the country will fall into their laps. Even a broken watch is right twice a day.

Muharrem Ince, the CHP candidate backed by Kilicdaroglu for the presidency in 2018, recently remarked that he could now win an election against Erdogan because the Turkish lira (TRY) now stood at 14 to the dollar compared to 4.5 four years ago.

He’s right. Even Ince could win a vote in a contest with Erdogan at the moment. It’s a pity for Ince that Turkey’s currency crisis in August 2018, which placed the lira squarely on the path of destruction that led to the collapse we’ve lately witnessed, came a couple of months after he was stuffed in an election that meant Erdogan could remain ensconced in the palace.

Of course, what Ince, Kilicdaroglu and all the other pretenders to the throne should be concerning themselves with right now is whether, under the Erdogan regime, an election will actually be held (the law says one must take place by June 2023, but Erdogan has special skills where working around laws is concerned).

Back with the unpropitious Kilicdaroglu and we find that he has a penchant for writing letters in his spare time. Just recently, he sent letters to retail chiefs asking them not to hike the prices of 10 basic food items, including flour, oil, milk and pasta.

A most cogent and well-prepared policy. Kilicdaroglu could become the first politician in the world to solve the inflation problem by writing some letters.

One problem that might upset his plan is that in miseried Turkey there are already quotas on some items on the supermarket shelves. Empty shelves are another difficulty. Such is the volatility in the USD/TRY exchange rate by now that some retailers would rather hold goods back than risk pricing them too low.

The sight of alarm devices tied to products in supermarkets and baby food locked in glass cabinets has become commonplace in Turkey. Enchained cooking oil cans is a new development.

On December 4, Kilicdaroglu was in Mersin. The purpose of his visit was to hold his first big meeting to call for urgent snap elections. More meetings are planned.

These gatherings particulary attract the CHP’s middle-class voters, who are facing medicine and food item shortages. They’re also useful for Kilicdaroglu. He can get out of the office and get some fresh air. However, it is December. There’s a question as to how many more of these events can be held before the chilly winter weather descends.

The CHP’s decision to arrange the gathering was also good news for strongman Erdogan. There should always be some hope that election day will arrive, just to keep the troublesome serfs calm.

The CHP is running to the elections at full speed.

The establishment and the middle class in Turkey, ranging from the political field to the media, are still not aware just how serious the country’s situation is. The politicians put on some events with some fine words. The media broadcast the events. The middle class tweet.

Turkey saw shortages of food and basic goods at the end of the 1970s. Too many people died in clashes between the right and left. The PKK, a Kurdish terrorist organisation, arose on that fertile ground. The chaos paved the way for the 1980 military coup.

If Kilicdaroglu can be the main opposition leader in a country that has 84mn citizens, Erdogan can be president and the TUIK can be the statistical institute, why should Fitch not be the ratings agency?

Fitch and its peers do a serious job. They have prevented many global crises. The good thing about the finance industry is that you can lose everything you have except your reliability.

On December 2, during the Istanbul night-time, Fitch landed a surprise, announcing that it had cut Turkey’s outlook to Negative from Stable. The rating stands at BB-, three notches below investment grade.

Explaining the move, Fitch pointed to the administration stating that it intends to deliver further rate cuts. However, the firm did not explain why it could not wait until the end-of-week market close on December 3 to release its decision.

On the evening of December 3, Moody’s Investors Service announced that it had affirmed Turkey at B2/Negative, five notches below investment grade.

The central bank, meanwhile, confirmed on December 3 that it was back in the USD/TRY market again to burn up some more reserves.

BloombergHT cited unnamed sources as saying the delivery this time round was $300mn or thereabouts.

The central bank is also busy shorting USD contracts on the Borsa Istanbul Derivates Market (VIOP). However, these are Turkish lira-settled contracts (no FX payment at maturity) and the VIOP does not have a significant impact on the spot market.

The Erdogan set-up is always making interesting choices. Currently, it is again burning through reserves while the media is loudly reporting that it does not have too many usable reserves to use in interventions, even in gross terms.

What’s missing is some more lira to buy FX and gold. Net lira loan flows stood at TRY104bn in November, the highest figure recorded since the record TRY141bn seen in April 2020.

The lira loans growth is not peaking as yet, but this is just the beginning of a new lending phase.

Next up in the downfall of the lira is breaking 14/$. The latest all-time weakest rate of the beleaguered currency versus the USD was registered at 13.9745 on December 3.

Five-year credit default swaps (CDS) on Turkey are beyond the 500-level again.

On the global markets front, the USD index (DXY) was working its way to the 97-level at the end of the week.

Federal Reserve chairman Jerome Powell has been kept at the helm. He is good at making investments. There again, it does not require amazing aptitude to govern Blackrock Reserves in the United States of Blackrock. It is enough to listen to the advice delivered by the Trump or Biden administration.

On December 15, Powell will step forward to announce the results of the Fed’s next open market committee meeting.

The current plan is to cut the net monthly money printing volume by $15mn each month and to zero by July.

On Turkey’s foreign policy front, Erdogan has said little of consequence this week. He does enjoy a silence before a storm.

On December 16, Turkey’s central bank will release its next rates decision. The consensus suggests the policy rate will definitely be cut again.

The cut could be 100bp, 200bp or 300bp. If the benchmark rate is cut by 300bp, it will fall to 12%. A 12% rate may open space for Erdogan’s public banks to launch a mortgage campaign offering monthly interest at 0.99%. Get yourself the latest odds on whether Erdogan is attempting to launch one boom-and-bust cycle too many.