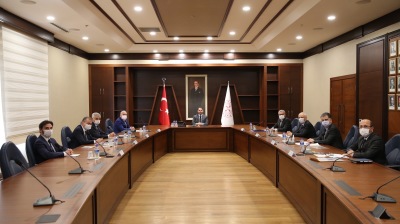 Turkey's bankers were asked to drop in on finance minister Albayrak.
By Akin Nazli in Belgrade June 7, 2020

Bank CEOs and general managers were in Ankara on June 3 for a meeting with Turkey’s Finance Minister Berat Albayrak. In the “text” sent to the country’s banks one day after the Ankara encounter, the watchdog said that it was closely monitoring the banks’ practices as regards their asset ratios, adding that it was pleased that most of the lenders were demonstrating the required attention to the matter.

However, the BDDK also warned that it had discovered from audits and examinations that some lenders, even though only a few, were playing with maturities, limits and definitions to formally comply with the ratio.

The watchdog cautioned lenders that in their efforts to achieve compliance they should not play with (1) the maturities of financing bills or (2) loan maturities or (3) definitions of SME, project and export credits.

Separately, Reuters reported on June 6 that private lender Yapi Kredi, a JV between local conglomerate Koc Holding and Italy’s UniCredit, has sent SMSs and emails to its clients to inform them that it was imposing a limit on FX deposit accounts, including gold deposit accounts, and a minimum duration on some such accounts as of June 13.

Atilla Yesilada of Paraanaliz has also recently expressed anxiety about "The Brutal Murder of the Turkish Private Sector".

Well, there are those who say that if the neoliberals had since 2003 worried about brutal Erdogan regime policies at home and in the near abroad that have cost the lives of thousands of people, rather than enjoying the fruits of Turkey’s relentlessly debt-fuelled economy, then things may not have reached this point. However, there is still no clear opportunity in view that could give someone a chance to put an end to the uncomely era of Recep Tayyip Erdogan.

As things stand, the body counts are rising in Libya and Syria as well as in Turkish jails where political prisoners who get no quarter from the state are left exposed to coronavirus and other fatal ills while hardened criminals enjoy temporary releases or amnesties. But things are as they are and Turkish neoliberals are worried about the private sector. Officials will tell you the administration is not capable of an unjust killing, nor of placing manacles on private business. But the more it can only sustain itself from violence in cold daylight, the more we can worry about ugly outcomes for business in Turkey.

Everywhere opinion poll results are circulating again, suggesting that the number of votes that would go to Erdogan or to his “spare tyre”, ultra-nationalist MHP leader Devlet Bahceli, are far short of what would secure a coalition victory in the next elections. But by now, whether any elections will be held is questionable.

“The [Yapi Kredi] bank easily achieves its asset ratio, but this limit was raised due to profitability pressure. The maturity for forex deposits is extremely low anyway,” an unnamed banking source told Reuters.

Systematic manipulation has globally reached unprecedented levels in giving the post-truth era its due, and Erdogan’s Turkey stays out ahead of Donald Trump’s America, though perhaps only because the latter is restrained by a bunch of cross generals who are still allowed minds of their own.

So, there’s no need to seek even a slither of the simplest logic in the unnamed banking source’s comments to Reuters in response to Yapi Kredi's move on FX accounts, it just brings home the point that all those fixed on a convulsive outcome, from the humblest speculator to the US president, are sending the Titanic, that is to say planet Earth, full steam ahead as the water gushes in.

Coronavirus has put a deeper gash in the hull than was expected from the accumulation of insidious economic imbalances alone and the sons of Adam have found their wise solution in stepping harder on the gas.

In this sense, BloombergHT reported on June 6 that Albayrak informed local financial media hacks and finance industry representatives during a closed door meeting in Istanbul that he will soon make an announcement regarding Euroclear Bank.

“According to information obtained by BloombergHT”, banks will be able to trade their Turkish lira-denominated bonds via their accounts at Euroclear Bank.

This will amount to a drastic solution to foreigners’ nosediving holdings in domestic government bonds.

According to media reports, the minister was also confident that portfolio inflows into Turkey will revive in the second half of this year. He did not elaborate on whether they will have “moustaches” (foreign investors who are actually Turks who trade via foreign brokerage houses).

While we’re on the subject of peculiarities (aren’t we always where the mouldering of Erdogan’s Turkey is concerned?), the finance ministry’s cash budget figures suggested on June 5 that the cash deficit sharply contracted in May, while the ministry’s domestic borrowing broke another record.

The ministry plans Turkish lira (TRY) 27bn of domestic borrowing versus TRY12.4bn of debt redemptions in June, according to its borrowing plan released on May 29.

The TRY27bn is written random-wise; it is exactly the same figure for July and TRY28bn for August.

If the Treasury borrows based on the TRY27bn plan, the figure will not suggest a new record. However, the Treasury has dramatically exceeded its plans in recent months and why it has borrowed at a record level while its deficit sharply contracted in May is an open question.

No one can get a look at the Treasury’s accounting books but the borrowing is done through the market.

Moody’s Investor Services previously scheduled a Turkey sovereign rating review for June 5 but that date saw it again put it off to another day. In its latest rating action for Turkey, in June last year, Moody’s issued a downgrade to B1, four notches below investment grade, with a negative outlook.

On June 1, Moody’s released an assessment of the Turkish banking industry.

Meanwhile, Turkey was the fastest growing OECD country in Q1 and in April “Lira weakness pushed up prices in the country,” bringing the annual inflation rate to 11.4% in May from 10.9% in April.

Just 0.5pp and even the finance industry trolls start complaining about booming prices? The finance industry and the government trolls appear to have concluded that Turks are muttonheads who do not grasp that inflation has been falling due to some ‘high-level mathematics’ while prices were actually making strides in the other direction. Perhaps these trolls need calling in for a course of education rooted in reality.

More examples could be extended here but revisiting George Orwell would be more helpful. Chasing up every single manipulation in the media is a thankless task given the raging gale at the moment. How long till Ankara has a spokespig named Squealer placed in charge or reconciling the irreconcilable?