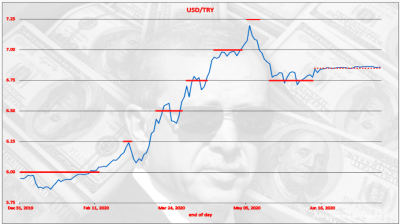 An interesting choice in exchange rate policy: Fixing the exchange rate while applying a floating regime. The Turkish lira's volatility is, meanwhile, lower than that of currencies subject to fixed exchange rate regimes.
By Akin Nazli in Belgrade July 19, 2020

The Turkish central bank has hiked FX reserve requirement ratios by 300bp for all liability types and maturity brackets for local banks, it said on July 18.

Turkish market players are at least happy that they have convinced the central bank to announce its new regulations and amendments on Saturdays. They have, meanwhile, asked the BDDK to group regulations in bundles that can be released in one go, rather than sending out regulations one by one, day after day.

The Turkish economy administration at the presidential palace gives the impression that its mornings typically involve the arrival of an official who turns up with a new idea, a new idea that they set out to put into effect that very day. The regulatory bodies such as the central bank or the BDDK then seemingly work as mere secretaries of the palace administration.

Sure, there are some side effects caused by the approach, such as surprised reactions from related bodies and inconsistencies that spring up against other regulations and amendments, with the government then amending its regulation or amendment. Generally, however, that does not stop the regulatory change in its tracks. It proceeds on its way.

On July 18, the central bank restated that, within the context of measures announced on March 17 to contain adverse effects of the coronavirus (COVID-19) pandemic, FX reserve requirement ratios were reduced by 500bp for banks that met real credit growth conditions (or for banks that managed to solve the credit growth conditions puzzle), and $5.1bn of liquidity was released.

Additionally, banks that met real credit growth conditions for the first time were provided with approximately $9.2bn of liquidity, and thus, a total amount of $14.3bn of liquidity was provided to the banking system, the authority added.

“This time”, approximately $9.2bn of FX and gold liquidity is expected to be withdrawn from the market, the authority also said.

The aforementioned change will take effect from the calculation date of July 10 with the maintenance period starting on July 24.

As usual, the latest amendment to an amendment by the central bank became a weekend exercise for the Turkish market community.

According to @VeFinans, a prominent Twitter account which provides reliable data and analysis on the Turkish banking industry and macroeconomy, local lenders have four options to comply with the latest regulation: