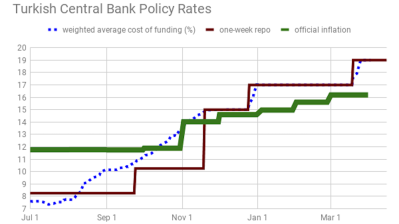 Also on April 5, the Inflation Research Group (ENAG), led by Istanbul academics, said that its calculations showed monthly inflation in March was 3.36% versus the official 1.08% announced by the TUIK.

The latest depreciation of the Turkish lira (TRY) adds to already booming commodity prices, supply shortages and problems seen in logistics. Actual price increases in Turkey will, as a result, accelerate.

On April 15, Turkey’s new central bank governor will hold his first rate-setting meeting. Given the current market stress and remarks made by the new governor, Sahap Kavcioglu, since his appointment, it is widely assumed that the policy rate will be held at 19%.

The question for Turks and those who cannot simply offload their Turkish papers and drop the USD/TRY pair from their screens is when the rate will be cut as a prelude to a boom in Turkish lira lending.

On April 29, Kavcioglu will release his first end-2021 official inflation forecast. The regulator’s current forecast is for 9.4%.

On May 3, the TUIK will release the official inflation figure for April. The official data series still suggests that headline CPI annual inflation shall to a degree rise in April, prior to a decline in May thanks to the base effect.

US President Joe Biden has announced his big stimulus package and talk of tax hikes ahead is growing.

On April 24, Biden will most probably decide not to describe the WWI Armenian Genocide as “genocide”, with the decision a test of his Turkey policy.

Meanwhile, the EU, led by Angela Merkel’s former defence minister, may shift uncomfortably in its chair, but as things stand its actions amount to openly supporting the continuation of the Erdogan regime. A deal for Ankara with Biden is likely in the works.

On September 26, federal elections will be held in Germany. There is a possibility that Germany, Europe and the rest of the world might be waving goodbye to the German Christian Democratic Union (CDU).

The “third” wave of the coronavirus (COVID-19) pandemic is an undeniable fact by now. Turkey will not be able to launch its tourism season in April. Hopes are now pinned on June.

On the USD/TRY chart, backdoor interventions continue to be seen. ‘Childish’ attempts emanating from Ankara at pushing parity below the 8-level when the foreign markets were closed proved short-lived. Under observation is how much life Turkey still has left in its near-exhausted FX reserves.

Some more portfolio outflows from Turkey are expected. There won’t be much left soon. As a result, the game will be played only among locals. The current account deficit remains a danger that investors will keep in view on the dashboard.

It was early in November when it dawned on the government that it did not have the firepower to continue defending the lira the way it had been. A sharp U-turn that brought in a central bank governor whom markets chose to believe in—that they bought into the idea that a neurotic Erdogan administration commitment to tight monetary policy was durable remains a source of great bemusement to some—triggered hot money inflows from abroad. On March 19, the governor was fired.

Each zigzag from the administration brings in shabbier and shabbier hit-and-run pawn brokers with shorter and shorter term focus and less money.

Some derisory attempts at intervening in the USD/TRY market via “retail” accounts were seen, but local FX-holders are not about to believe in anything the Erdogan regime’s numbers say.

ISTANBUL BLOG: Portfolio outflows decline but Turkey not out of the woods yet
ISTANBUL BLOG: A lull in Turkey’s slow motion car crash
ISTANBUL BLOG: Bourse keeps foot on throat of short sellers on third day of Turkey tumult