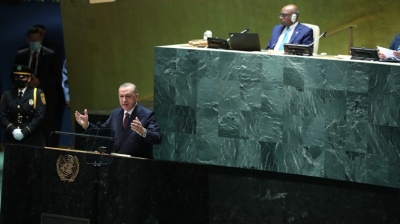 Build it up as he might, when 19 of the 20 G20 nations have already ratified, Erdogan's announcement of the upcoming Turkish ratification of Paris amounted to saying "Please applaud us for crossing the finishing line last." / Turkish Presidency.
By bne IntelIiNews September 22, 2021

Turkey has stood firm against ratifying the Paris Agreement on climate change for more than five years under Recep Tayyip Erdogan but, late on September 21 in a speech to the United Nations General Assembly in New York, the Turkish president announced that this resistance would end in October when his country’s parliament would pass the necessary legislation.

So what’s changed? Erdogan wasn’t exactly clear on that point, but it doesn’t take a sharp-eyed observer to spot a president facing an election by June 2023 and struggling in the opinion polls amid economic malaise and following a summer of shocking wildfires and flash floods that his administration, in the eyes of most Turks, proved alarmingly unprepared for. Add to that a torrid, prolonged drought and the “sea snot” pollution, exacerbated by rising temperatures, that has spread across the Sea of Marmara, as well as the millions of Turkish teenagers who will be voting for the first time in the presidential election, and, actually, you might say it’s quite clear what’s changed.

And that’s not to mention the struggle that Erdogan, something of a pal to former US president Donald Trump, is going through in attempting to convince current occupant of the White House and Paris Agreement fan, Joe Biden, that Turkey can be a reliable ally.

It's not as if Erdogan should take a bow for moving to ratify the “Accord de Paris”, for the other 19 member nations of the G20 have already ratified.

But Erdogan being Erdogan, the dear leader couldn’t resist a bit of bombast, telling his audience at the UN: “I would like to announce to the whole world here from the United Nations General Assembly the decision we have taken following the progress made within the framework of the agreement. We plan to submit the Paris Climate Agreement for approval to our parliament next month."

Also weighing on Erdogan’s mind might have been the fact that November brings the UN Climate Change Conference (COP26) in Glasgow. Turning up there without the stamp of ratification could have been awkward.

Apart from the sense of ‘fix the climate’ urgency generated by the apocalyptic scenes Turkey endured during the summer at the hands of anomalous weather, the country gets regular reminders from the clean energy lobby that it is one of the biggest producers and burners of atmosphere-gumming coal in the world.

The day after Erdogan’s speech at the UN, another followed from Europe Beyond Coal. Releasing a response to the speech and also to China’s announced commitment to end backing for new coal projects overseas, the NGO said Turkey must now make a roadmap to leave coal behind.

Some 73% of coal-fired projects in the planning stage in OECD countries are in Turkey, the coal-hooked country with the fifth highest number of planned coal-fuelled plants in the world. On a brighter note, coal projects that had a total capacity of 62 GW have been cancelled in Turkey since 2015, with banks increasingly shying away from such investments.

Linking the Erdogan and Beijing commitments, Duygu Kutluay, a Europe Beyond Coal campaigner, stated: "China's commitment to end coal support overseas spells the end for new coal in Turkey. Combined with the Turkish government's intention to ratify the UN Paris climate agreement, this means it must plan for a total coal exit this decade.

"Turkey has a massive potential for renewable energy. With this historic climate commitment, we now have the happy challenge of making a bold transition away from coal, and towards clean energy. This will improve the health of our people, protect us from more tragic wildfires, and show that we will do our part for international climate action."

So let’s end with some more soothing words from Erdogan: “Turkey, which does not remain indifferent to any global problem, crisis or call, will also do its part in terms of climate change and environmental protection.

"[…] while the Earth embraces millions of living species on its soil, it only expects us to respect the balance of nature in return for this generosity."