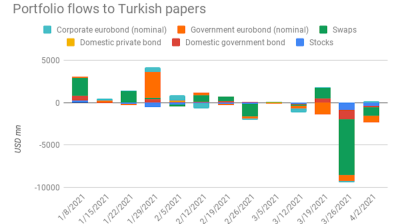 Overall portfolio outflows from Turkey—trackable based on data sets provided by the Turkish central bank and banking watchdog BDDK—including equities, domestic bonds, eurobonds and swaps, declined to $2bn in the week ending April 2 amid the country’s intensified economic crisis and market tumult.

The week was the second week in the wake of the shock firing by presidential decree of central bank governor Naci Agbal, who was becoming a market favourite for his aggressive monetary tightening prior to President Recep Tayyip Erdogan moving against him. The first week, ending March 26, saw $9bn of outflows, according to bne IntelliNews calculations, seen in the table below.

In the table, the data on flows regarding Turkish lira papers, including Borsa Istanbul equities, domestic government bonds and domestic corporate bonds was sourced from the central bank.

For eurobonds, the central bank provides stock data on nominal and market value bases. In the table above, we use nominal stock figures, held by non-residents and excluding local banks’ foreign branches, to calculate the flows.

For swaps, we use the central bank data on its foreign currency swaps with local lenders and banking watchdog BDDK data on the Turkish banking industry’s off-balance sheet FX position.

(IntelliNews Pro subscribers who are interested in specific details can post a message in the Ask the Analyst box at the bottom of the page. The public website audience can click on the Need Help? window in the bottom-right corner of the page).

In the third week after the sacking of Agbal, which began on April 5, the government has apparently been aiming to stabilise the USD/TRY pair in the 8.10-8.20 band, with the pressure of sharp outflows apparently easing.

In the upcoming period, the portfolio flows will stay under scrutiny. In the table, it can be seen that foreign investors held $128bn of Turkish papers and lira swaps as of April 2.

However, do not expect that all of these papers will be disposed of in the coming days.

An unknown proportion of non-resident holders of Turkish papers are actually Turks—known as “moustaches” in the trade—who use foreign brokerage houses.

Also note that an unknown proportion of non-resident holders are long-term partners of the Turkish private and public sectors.

For instance, there are six Qataris who hold around 10% of the Turkish stock market, according to data from the Central Securities Depository of Turkey (MKK).

Nevertheless, the foreign-investor share in the Turkish stock market keeps testing historical lows. It is in the 42%s based on market value and the 28%s based on the number of shares. How low the share can go remains a question.

Non-residents’ domestic Turkish government bonds stock saw a record low of $4.96bn as of November 6, just before Agbal took up the central bank job. Perhaps, we should expect at least a few billions more in outflows from the $7.37bn of stock seen as of April 2.

Domestic corporate bonds are negligible while Turkish banks’ swap stock with foreigners might be expected to fall in the days ahead from the $16bn stock recorded as of April 2.

In regard to the $80bn of nominal eurobond stock, there are some upcoming scheduled redemptions.

Given that the Turkish lira loans flow is not so far this year at the eye-popping levels seen in 2020, local FX and gold demand seems to have not yet taken off.

How will the current account deficit and vital imports such as energy be financed in the next period? Something else to watch closely.

So far, no cries of “default!” have been heard from external debt rollovers. Akbank is in focus as it is expected that it will, as is traditional,  launch the spring syndicated loan renewals season for Turkish banks.

To face all the FX demand that has mounted up against the lira, the Turkish central bank claims it has approximately $90bn of gross FX and gold, while its net FX position remains in deep negative territory at around minus $60bn.

All in all, it is not possible to gauge with any certainty the answer to the ultimate question of when the government will lose control on the USD/TRY chart—in the fashion that was seen prior to November 6 and the appointment of Agbal to administer a “bitter pill”—and when it will attempt another U-turn or fall into another balance of payments crisis.

ISTANBUL BLOG: As cryptocurrency skeletons fall from closets, it's scandal upon scandal in Turkey