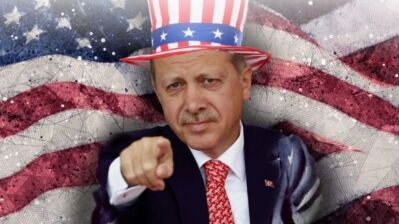 Turkish President Recep Tayyip Erdogan, stranded in the most desperate economic and political situation he has ever been in, on June 14 attended the Nato summit in Brussels. Though Erdogan’s troubles and his attempts to curry renewed favour with the US are fascinating to Turkey watchers, they were not, of course, top of the agenda for the North Atlantic Treaty Organization. The defence bloc, not focused on Erdogan’s dreadful standing in the opinion polls back home, was busy promoting an “agreement” on its “ambitious” Nato 2030 agenda, while members “further agreed to develop Nato’s next Strategic Concept for the summit in 2022”.

Three decades after the collapse of the Soviets, Nato is in its own desperate situation. As a military alliance, it needs one or more enemies. So Nato managed to add some stern notes in the summit communiqué on both Russia and China. German Chancellor Angela Merkel, the architect of the Nord Stream 2 natural gas pipeline that opponents say increases Russia’s energy stranglehold on Europe, was among those present at the summit, but Hunter Biden, second son of US President Joe Biden, known to have used Air Force Two to fly to China for business meetings, was not there. But his father was certainly there, laying on the old bromide and chestnuts at every turn now that the West, thanks to the warts and all exposed by the rise of Donald Trump, has become somewhat insecure over its democracies and occupation of the moral high ground.

Erdogan looks a tired and weary despot. Turkey is collapsing all around him. His response to the emergence of fugitive gangster Sedat Peker, transfixing millions of Turks with his week-by-week YouTube revelations of how the tawdry Erdogan administration is hopelessly enmeshed with the mafia, has lacked any bite. But it is fair to say that the corpse of Erdogan got what he wanted from the Biden meeting on the sidelines of the Nato summit. The Leader of the Free World declared without any noticeable hesitation for everyone on the planet to hear that Erdogan is still the legitimate political authority in Turkey.

On November 4, 2002, when Erdogan’s Justice and Development Party (AKP) won a majority in the Turkish parliament by attracting 34% of the vote, thanks to the country’s electoral system, Erdogan remained subject to a ban on him entering the parliament or government because of a conviction for reciting a poem that was said to have incited racial intolerance. By December 10, 2002, Erdogan, although he still had no official title, was in the White House.

Deniz Baykal, at that time head of the main opposition Republican People’s Party (CHP), did not get the job done when it came to providing a two-thirds majority in Turkey's legislature to amend a law to make Erdogan PM before the deadline.

On March 1, 2003, the parliament then shocked everyone by rejecting a government resolution to support the US in the Iraq War.

What a time to look back on. In those days, there was a more or less properly functioning parliament in Turkey, but its days were numbered while the West and its media loudly applauded Erdogan’s passion for “democracy”. True story.

In 2011, when the Arab Spring wars broke out in Libya and Syria, there was nothing to stop Erdogan. He was by now indispensable to neocon designs on keeping something of a grip on the Middle East.

Turkey and the US: Old pals, when it's in everyone's interests. Hillary Clinton seen with former Turkish PM under Erdogan Ahmet Davutoglu.

As of June 2021, the US is scraping the bottom of the Erdogan barrel by employing him in the Afghanistan mission with a brief to guard Kabul airport after Uncle Sam has gone home.

“Turkey is a great Islamic country,” Suhail Shaheen, the Taliban spokesman in Qatari capital Doha told Reuters on June 11, as the Islamist jihadists warned the Turks that they’d be best advised to pack up and leave Afghanistan just like their American pals.

Meanwhile, the EU/US gabble about wanting Turkey to be a “democracy” continued apace remorselessly.

Biden clearly can’t afford to slap the backs of authoritarians the way Trump did, but the now transactional relationship with Turkey is clearly one the US and Nato would be loathe to lose given the reality of the country’s crux geographical, and thus geopolitical, location. Thus as the deal-haggling over the Kabul subcontractor job went on, Biden and his officials made every effort in Brussels to sound unyielding on their principles, while refraining from any tough action against Ankara. Neither the US or Turkey can budge over the latter’s acquisition of the Russian S-400 advanced rockets, thus there was more speaking around the issue.

If you love the humour in PR and diplomatic signalling, in the wake of the Biden-Erdogan meeting there was more rot to be talked on why neither man brought up the subject of Washington’s Armenian genocide recognition, and more of not getting to the unhelpful point when it comes to Erdogan’s offensive in northern Iraq and the legal procedure launched in Turkey to shut down the pro-Kurdish People’s Democratic Party (HDP).

Other subjects that didn’t get a look-in were Turkey’s increasing lean towards China amid its economic catastrophe and its bellicose role in last year’s Second Nagorno-Karabakh War. As "brother nation" Azerbaijan, armed with Turkish drones, knocked big chunks out of the Armenian armed forces, Nato bods shifted uncomfortably in their seats.

So, what have we here? At the end of the day, despite months of professional PR moulding from the Biden administration, Erdogan has managed to dig his claws into a transactional partnership with the US following the departure from the Oval Office of kindred spirit Donald.

The Afghanistan deal has not been concluded as yet but the Biden administration may now see its way clear to keeping the “autocrat” (Biden’s words) in power to secure the agreement and other conveniences at the crossroads of Europe and Asia. It is, after all, always better to do business with a single weak man rather than many.

Such are Erdogan’s growing difficulties, though, the Biden administration’s tentative support may not be enough. The Turkish people can’t catch a break (news of a wretched defeat to Wales in the delayed Euro 2020 football finals has just come through!), but more and more Turks are beginning to realise they deserve one.