ISTANBUL BLOG: The Turkish ‘moustaches’ that no one dare singe 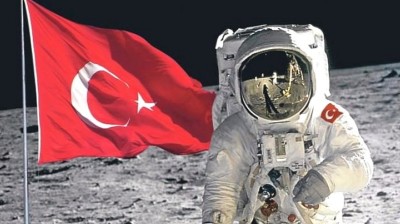 Moustache on the moon.
By Akin Nazli in Belgrade November 21, 2019

The Turkish finance ministry has introduced an exemption to withholding tax for foreign buyers of Turkish lira-denominated domestic government bonds, according to a November 20 announcement posted in the Official Gazette.

The move, already in effect, allows foreign buyers to use an omnibus account—enabling managed trades for more than one person, each of whom can remain anonymous—with the Central Securities Depository of Turkey (MKK), Reuters reported.

The term ‘Foreigner with a moustache’ is used by Turkish capital markets players in reference to a Turk who trades via foreign brokerage houses. It became popular in 1988 when the then government introduced a tax on Istanbul stock exchange profits for everyone except foreign investors.

Since then, the tax rules have been amended many times over, but in Turkey, those lucky enough to have the option, typically find it advisable to retain the status of a foreigner, particularly if they can claim Western origins. Detained, but eventually released, US Pastor Andrew Brunson and Turko-German journalist Deniz Yucel are two of the more notable cases that spring to mind.

It is impossible to identify how many “foreign” investors, who currently hold around 65% of the Borsa Istanbul market, are actually Turkish citizens, but, according to a column by Abdurrahman Yildirim published by Haberturk  in 2015, “once upon a time even an SPK [Capital Markets Board of Turkey] head said about one-third of foreign investors [on the Istanbul stock exchange] were locals”.

Keeping the show on the road

Right through the Erdogan administration are officials who, charged with keeping the show on the road whatever terrible consequence of economic mismanagement rears its ugly head next, appear to spend most of their time in a workshop devoted to coming up with original short-cuts or Potemkin village schemes to hide Turkey’s gruesome structural economic problems. Perhaps it helps that almost all of them used some kind of ‘alternative route’ to land their gainful employment in the first place.

The latest tax exemption for foreign buyers of domestic government bonds via omnibus accounts will go some way to solving the image problem of having low foreign interest in the market. The foreign share of the market in question has nosedived to stand just above 10% since an ‘Erdoganomic’ scheme saw the systematic scrapping of it from November 2018 with the objective of curbing interest rates.

With the moustaches and the government’s foreign collaborators given an anonymous way in, expect a quick rise in the foreign share of the domestic government bonds market. Meanwhile, if there are enough fools desperately looking for opportunities to throw excess good cash after bad thanks to the latest Fed easing, the government may solve its capital inflows problem.

The risks of it all blowing up in Turkey’s face be damned, Ankara is presently trumpeting headline macroeconomic and market indicators pointing to an apparent impressive turnaround from the economic morass the country sank into following last year’s currency meltdown.

The depressing picture that was seen in inflation and other official indicators was dispelled following the appointment of a  close associate of Finance Minister Berat Albayrak in the management of national statistical institute TUIK, the currency depreciation and volatility were solved with USD sales via public lenders and the overnight scrapping of London’s offshore lira swap market, the problem of growing non-performing loans (NPLs) was addressed with debt restructurings, booming fruit and veggie prices were defused with government-decreed discount sales and… the list goes on.

One remaining difficulty—that of Turkey having one of the highest credit default swap (CDS) rates in the world—is, so the speculation goes, being targeted with indirect CDS sales from owners.

High dollarisation, of course, is another persistent bugbear. Everything has been tried to rein it in but here FX deposits held by banks come in handy to support the central bank reserves and they do not set off alarm bells in FX demand as they are merely bank records.

Nevertheless, dollarisation is a real drag for those working on Turkey’s image and boosting domestic confidence. That confidence is so far from where officials would like it to be because, with enough foreign financiers having closed the credit taps to Turkey, Erdogan does not have the wherewithal to bribe his way to a majority. The 2018 currency crisis threw Turkey’s dream of soon becoming a trillion-dollar economy entirely off the rails and has inflicted wretched economic pain on the country’s population. Not so many folk remain ready to buy into stories of a bright future or believe the country’s woes are entirely down to invisible, conspiratorial “external powers”.

The past 10 days brought three collective family ‘cyanide’ suicides in the face of hardship. But the enemy of course can’t be economic mismanagement or anything you could lay at the door of Turkish President Recep Tayyip Erdogan. The enemy must obviously be the cyanide, or its purveyors. Hence, Erdogan’s spokesman Ibrahim Kalin on November 19 pronouncing “Cyanide became one of the most searched words on Google and search engines after 11 of our citizens died in three incidents. I would like to underline that these are not collective suicides but murders.”

Turkey’s government was now working to curb cyanide sales and planned to establish a system to track the poison, according to Kalin. Three cheers for that man!

On November 9, following the first two of the family suicides, a satirical discussion opened on popular local forum Eksi Sozluk—amusingly it turned out that the discussion did not go as far as reality was set to go as all that participants could come up with was a recommendation for an “additional tax on cyanide”.

Turks, you see, believe Turkey “is a funny country as long as you’re not a citizen of it”.

But behold! November 20 brought good tidings. News from Ihlas News Service that, if you’re not careful, could have you believe the nation’s economic problems are all over. “Equinor, Valeura reportedly discover 286 bcm of natural gas in Turkish Thrace” read the headline.

The source of the story was Yukarisirt mukhtar (village head) Serif Yildirim. “We have heard from the workers that this region has huge gas reserve potential. Our land and field prices have soared since the news,” he reportedly told hacks on November 20.

Suleyman Berk, a real estate expert in Muratli, reportedly weighed in, stressing that the value of the land in the area had surged 40%.

This is a perfect win-win and many more wins all round. The government is happy as it will solve economic problems, Norway’s Equinor and Canada’s Valeura are happy with their gas discovery, the villagers are buoyed by the rising land prices and any buyers of plots will be chuffed to sit on natural gas sources, and so on.

Some “professional optimists” have started asking whether the government’s plans for growing the Turkish economy at 5% next year, without a current account deficit, may turn on some expectations for a gas discovery in the Eastern Mediterranean (whether its on Turkish or Greek Cypriot territory is a wee matter we can leave till another time).

Interestingly, claims of gas discoveries in Turkey generally occur prior to elections.

On November 20, the pro-Kurdish Peoples’ Democratic Party (HDP) became the first political party in this electoral cycle to call for early elections, while some officials from the Iyi (Good) Party, on the Turkish nationalist side of the political scales, offered a coalition to Erdogan with the primary precondition that parliamentary elections be held within 2020.

Will Erdogan cling on in the fashion of his Venezuelan bestie Nicholas Maduro or is he destined to be overthrown in a snap poll? Turkey’s next elections are not scheduled to take place until 2023 but since the strongman was forced to take the humiliating Istanbul revote loss on the chin in June, there have been plenty of bets about that he can’t wait that long to try and reassert his authority (perhaps that’s why there is such a hurry to get the economy artificially bubbling again). As things stand, a dash for an election win does seem the most likely strategy, especially if the way things shape up in the US over coming months indicate that the American judiciary’s chances of laying its hands on some of Erdogan’s circle are improving.