ISTANBUL BLOG: There may be no stopping the coronavirus from snowballing in Turkey 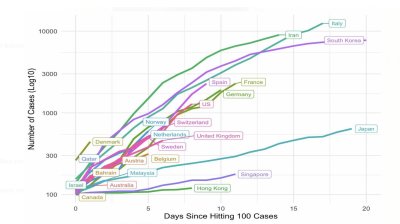 Turkey has lost its chance in the coronavirus (COVID-19) pandemic to be a “Singapore” or a “Hong Kong” and needs to spend all its available energy on not becoming an “Italy”, according to Alpay Azap, a medical professor and member of the Turkish health ministry’s Science Council.

The council is made up of prominent scientists but it is questionable how influential it was allowed to be in the regime’s political decision-making process in the early stages of the virus outbreak or even whether it has received accurate information on the true scale of the coronavirus situation facing Turkey. Centralised government control over virus testing kits used in the country has prompted deep concern that the official claim that Turkey identified its first coronavirus sufferer as late as March 10 is ludicrous.

Azap was speaking as the country’s official COVID-19 infection count jumped by 93 cases to 191 on March 18, with two confirmed deaths of people diagnosed as suffering the illness. By March 19, officials said there were 192 cases with three deaths.

A crisis every other day

Turkey does not want for crises. You can trust President Recep Tayyip Erdogan to cook one up every other day and dispense the angry rhetoric needed to keep it on the boil. Anyone wanting to reflect deeply on whether the strongman president has done a good job during his 17 years in power stands little chance of concentrating as the latest storm (Syria, Libya, the lira, gas off Cyprus, refugee rows with the EU, the S-400 missile dispute with Nato and the US, the Kurdish question, and so on—the list is as long as your arm) sweeps in. So the pandemic crisis stands out as an ‘import’ rather than as one of Erdogan's ‘exports’ with which Turkey’s president browbeats various counterparts in his zest for power.

Erdogan likes to be at the centre of everything that moves in Turkey but the country now faces an explosive, debilitating health emergency, so it might be time for him to stand to one side and let the experts, armed with as much transparent data as can be provided to them, take over. At least during his first press conferences addressing economic support to be provided by his administration in the face of the coronavirus outbreak, Erdogan said almost nothing about dealing with the spread of the disease. Does that indicate the experts are going to be given the necessary support and heft? One would hope so but, alas, in today’s beleaguered Turkey one must also conclude “probably not”.

The government has been horrendously slow off the mark in addressing the outbreak. Only on March 18 did it become clear that shopping malls would be closed and that closed-door top league football was now off the agenda.

Even employees of the health ministry’s hospital appointment call centres have complained that they are enduring a lack of basic cleaning supplies including soap in their offices.

The Turkish Medical Association (TTB) and the Turkish Health and Social Services Workers’ Union (SES) have been making increasingly desperate appeals to the government for effective cooperation in battling the outbreak.

ISTANBUL BLOG: Get ready for the official figures