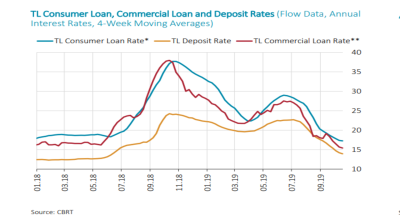 Turkey’s official macro figures as well as market indicators are indeed distancing themselves from the realities on the ground at a quickening pace. What to make of the fourth inflation report for 2019 issued by the country’s central bank and Finance Minister Berat Albayrak on October 31? It is full of fresh good tidings—but held up against the actual state of the Turkish economy, it is surreal.

Albayrak, while addressing business people, announced the easing of corporate rates by public lenders. Very soon after, state trio Ziraat, Vakifbank and Halkbank, stated in a press release that they have launched a fresh lending campaign for “manufacturing industry”, “the services sector”, “ongoing housing projects” and “overseas contractors”, with the aim of boosting employment.

The three banks have been slashing interest rates to even below government bond rates. They have moved to boost lending since August, with a particular focus on Turkey’s construction industry—essentially bankrupted in many parts—and stimulating the collapsed domestic demand brought about by the summer 2018 currency crisis that triggered a recession.

There’s speculation that business people have been selling their homes on paper to close friends to benefit from favourable mortgage rates. From now on, they may also benefit from the latest corporate loans packages on offer.

If you strain hard to pinpoint the economic actualities through the rose-tinted specs that officials want you to view the economy, it’s instructive to consider the targeting of the latest state-directed incentives. They are focused on completing housing projects or boosting employment, suggesting where you can find the most problematic fields in the economy.

Like a candidate for town crier who’s not going to get the job, Albayrak also heralded indications that Turkey’s GDP growth will turn positive in Q3, with around 4% growth expected in Q4. Inflation, he said, would fall to around 8% in October and to below targets at end-2019. The inflation expectation for the end of the year was last month cut to 12% in the government’s latest medium-term economic programme.

Those who still rely on the Erdogan administration’s official data in their planning and pricing can confidently take Albayrak’s figures as amounting to an early announcement of official data releases. He is by far the best forecaster of Turkey’s official figures. The close associate he appointed as the head of national statistics institute TUIK must be in awe.

The last day of October also saw central bank governor Murat Uysal confirm during the inflation report news conference that the national lender has cut its end-2019 inflation forecast to that very same 12% figure that the government had already come up with.

Media and finance industry representatives get just four chances a year to catch the central bank chief at inflation report presentations. A pile of questions were thus waiting on the calculation methodologies he is contributing to central banking literature, namely his theories of “the reasonable real return”, as well as on the data that remains unavailable on the central bank’s swap operations—so unavailable that in recent months it has even raised the eyebrows of the Financial Times.

Uysal, who has brought in spectacular monetary easing that is a fascinating, no doubt entirely coincidental (!) reflection of what President Recep Tayyip Erdogan has specified with his demands for cheaper and cheaper money, calmly recycled his non-answers. Finally, boredom set in. Uysal clearly found receiving the swaps query from each questioner tiresome—and he very helpfully warned his audience that there was no need to create the perception that some unexplained things are occurring in the operations of Turkey’s monetary authority.

Perish the thought, incinerate that idle intellect! “Creating a perception” is a big crime in Turkey.