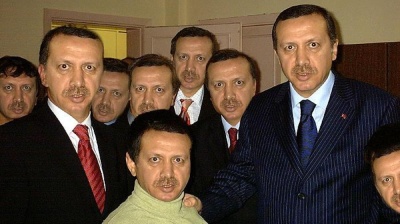 Erdogan. Not known for delegating the big decisions.
By Akin Nazli in Belgrade November 17, 2020

Previous finance minister Berat Albayrak, who quit the weekend before last, more or less said the same thing on September 29 as he outlined the country’s medium-term plan.

On November 4, President Recep Tayyip Erdogan said he was predicting that Turkey will release a positive GDP growth figure for 2020.

Given that the Boss has predicted it, we should certainly be confident that the reality as presented by the official statistics institute TUKI will converge.

On November 4, Turkish interior ministry data showed that the number of femicides in Turkey declined by 27% y/y in January-October.

The Stockholm Center for Freedom reported on November 6 that Turkey’s femicide data was a bit questionable.

There is a real question mark as whether the Turkish government relays the reality in any single field.

On November 5, the European Commission cut its 2020 contraction forecast for Turkey to 2.5% from the 5.4% it forecast in May.

There are buyers of these tales in the dog-eat-dog world but it is never clear whom is biting whom.

At the end of the day, ordinary Turks pay the bill.

New central bank governor Naci Agbal, who also sports an Erdogan moustache, is another who is sold as "orthodox". How orthodox will he appear after Turkey’s monetary policy committee (MPC) meeting on November 19? Should we expect orthodox praise or an orthodox lambasting of Agbal from foreign investors invested in getting a sufficient rate hike?

“Before that weekend when two key Turkish officials in the economy [the finance minister and central bank governor] lost their seats, on the evening of Nov. 6, Turkey’s position was at a threshold where either capital controls would be declared so that we would become a closed economy or we should immediately approach the IMF,” Ugur Gurses, a former Turkish central banker, wrote on November 17 in a column for Duvar.

“Erdogan has drawn a third option from the hat of these two options: It is a promise to return to ‘law’ with technocratic economy management; some kind of a chill out, a break. Even this state, itself, of ‘giving instructions to return to law’ demonstrates how institutions and rules have been blown up,” he added.

“Has nothing changed? Of course, the tone of the rhetoric has changed. Most probably, assurances were given again to many investors that interest rates would not be under pressure,” Ali Riza Gungen wrote  on November 17 in his column for Duvar, entitled “Parallels between Turkey's new economic team and an old drama”.

It is actually an easy job to function as a Turkish official. Just follow orders and regard official data as Teflon.

Official inflation has been constant at just below 12% across the past few months. Do I spot a raised eyebrow over there?

In October, the Turkish government suspended tariffs on wheat, corn and barley to support its domestic flour milling market amid rising international prices and concerns around local food security.

A dutiful official might describe it as negligible, but a “lack of coordination” between Turkey’s state-run grains buyer TMO and the agricultural ministry has meant that the tax suspension was declared before TMO closed its October purchase tender for 175,000 tonnes of wheat.

This mistakenly resulted in higher prices for TMO, with minimum offers already nearly $20 per tonne firmer than in the agency's previous purchase.

Turkey's tariff suspension on imported grains could be extended until the end of the 2020-21 marketing year but the benefits of the tax holiday have been largely offset so far by the lira's weakness, according to Argus.

If you want a positive side of the story then we can say that these price jumps will not have a negative impact on official inflation. Unofficial inflation is another story but a story rarely told.